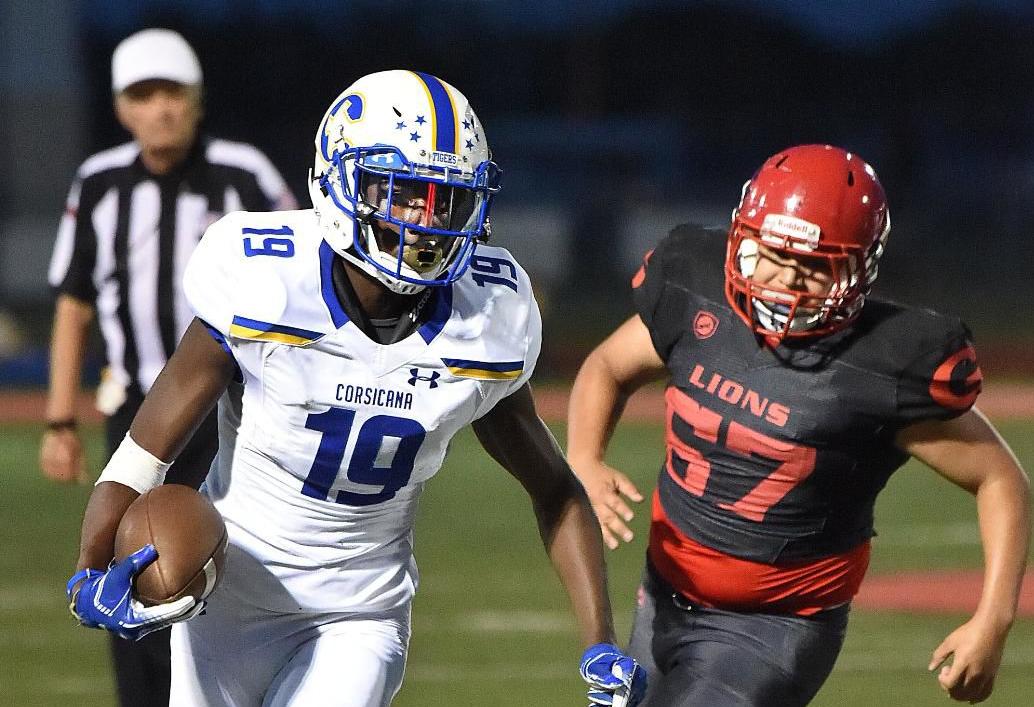 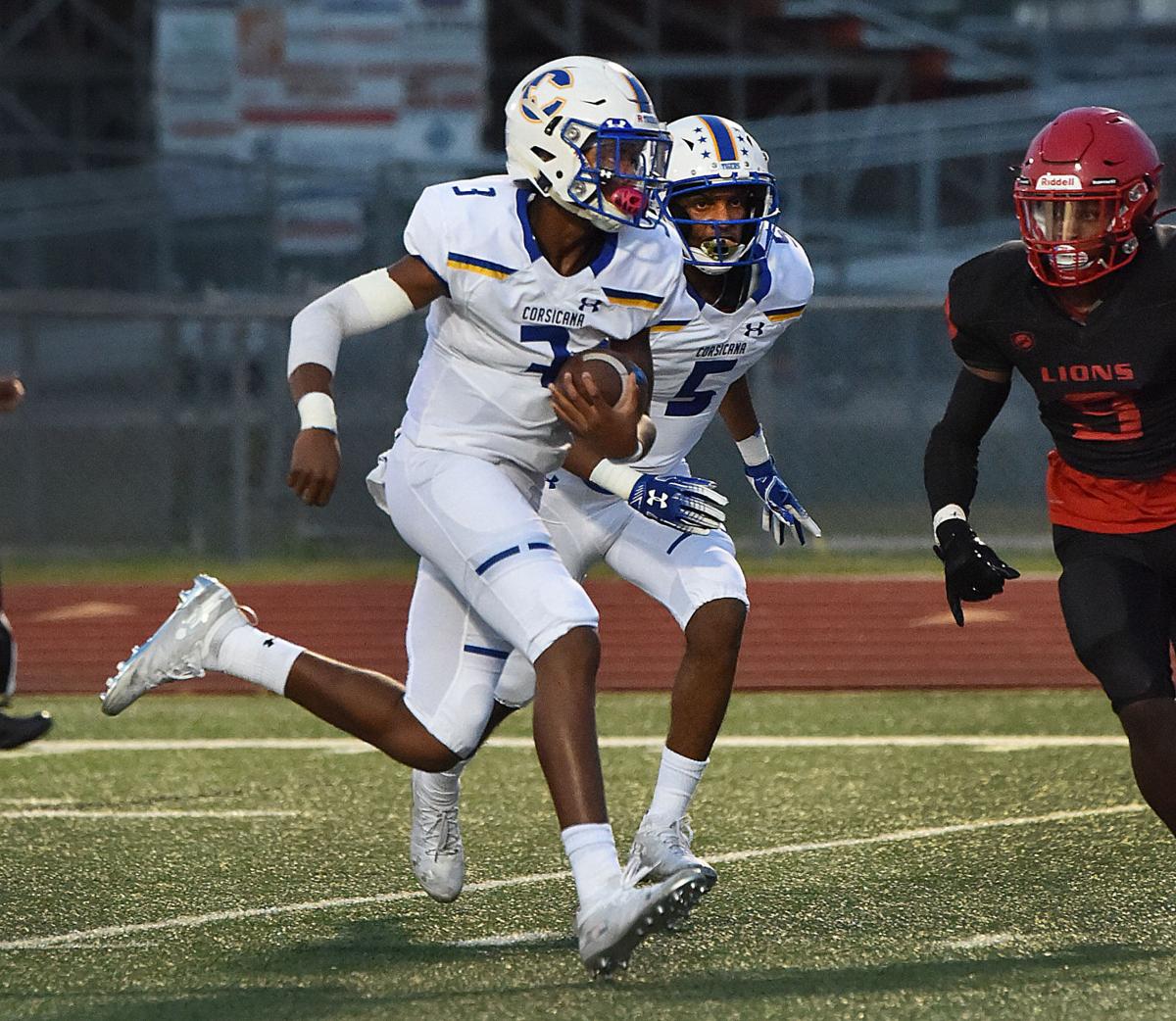 Tigers QB Solomon James scores on a 16-yard run to give the Tigers a 7-0 lead early as Corsicana's Qua Chambers and Greenville's Josh Luna follow the play. The Tigers went on to beat Greenville 20-7 in the District 8-5A DII opener Friday in Greenville. 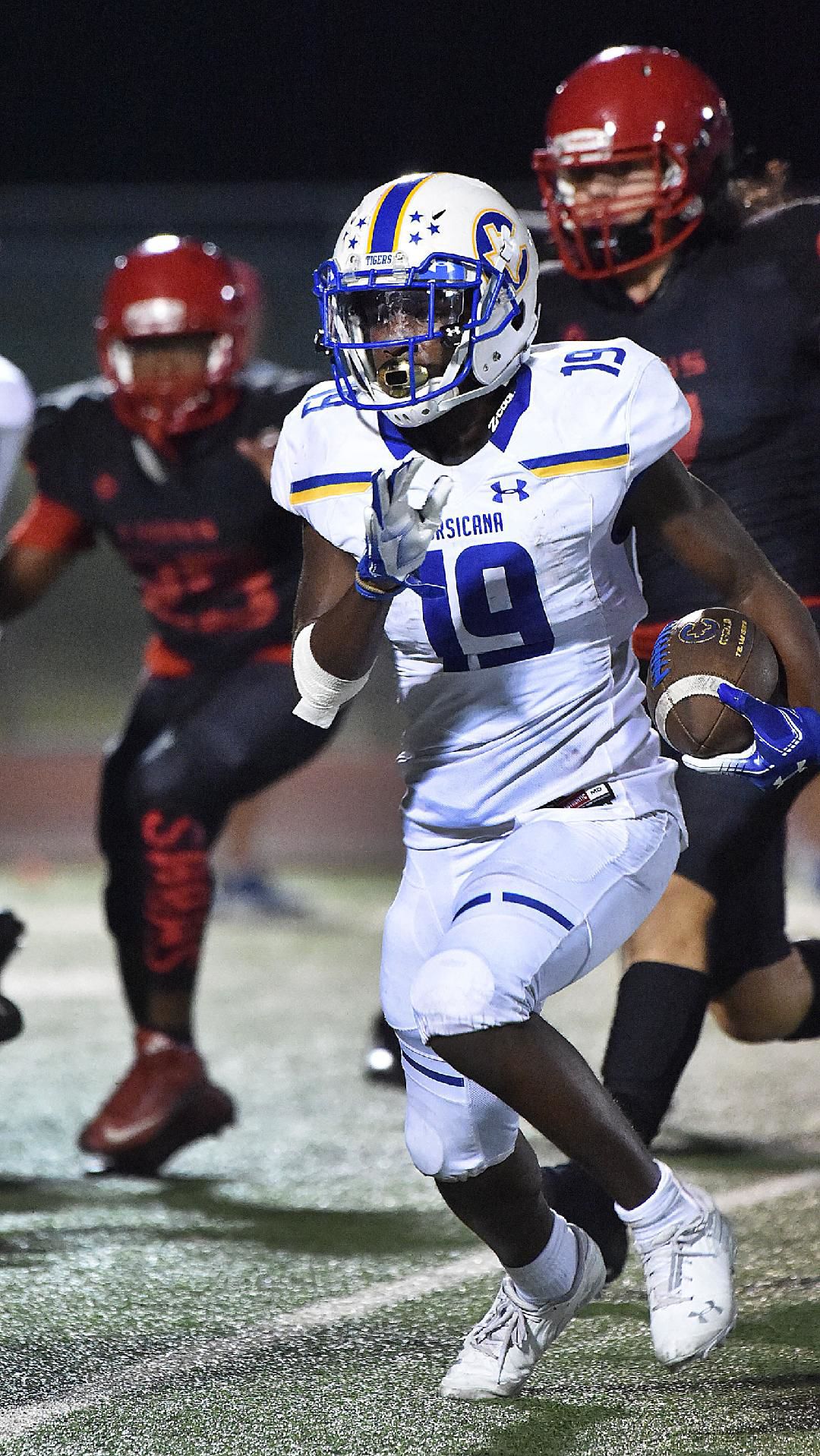 Tigers tailback Damarius Daniels scores on a 31-yard run with 8:02 left to give the Tigers a 20-7 lead over Greenville.

Tigers QB Solomon James scores on a 16-yard run to give the Tigers a 7-0 lead early as Corsicana's Qua Chambers and Greenville's Josh Luna follow the play. The Tigers went on to beat Greenville 20-7 in the District 8-5A DII opener Friday in Greenville.

Tigers tailback Damarius Daniels scores on a 31-yard run with 8:02 left to give the Tigers a 20-7 lead over Greenville.

GREENVILLE -- If you're going to be a winning program, you've got to learn how to win in the fourth quarter.

After the past two weeks, Corsicana's Tigers could give lessons on that subject.

They have not only won the fourth quarter in their last two games, both victories, but they've dominated the fourth like they've owned it.

And that's exactly why Hal Wasson's young Tigers are 2-1 today (and 1-and-oh!) in the District 8-5A DII race after beating Greenville 20-7 Friday night at T.A Cotton Ford Stadium in Greenville, where they put the Lions and the game away in the final 12 minutes of the district opener.

Consider this: Greenville's offense gained a total of just 21 yards in the fourth quarter and just two first downs, and one of those came on a face mask penalty. That's right, the Lions had almost as many positive yards on a Corsicana penalty as they gained on the Tigers defense in the fourth.

They were held on downs twice with a punt sandwiched in between.

Biggest play of night? There were a bunch, but none ignited the Tigers more than linebacker Tyler Farmer's leaping deflection of a fourth-down pass that stopped the Lions at the Tiger 32 with 9:35 left in the game.

The Lions started the fourth trailing 14-7 at the Tiger 31, and had momentum and a loud home town crowd on their side -- both the momentum and the crowd noise kept growing in the second half.

Then Farmer stopped both.

"That was a big play," Wasson said later. "I can't say enough about him. He's the leader of the defense."

And while the Tigers D was shutting down everything Greenville wanted to do, Zac Bryant's offensive line was knocking everything down for Tigerbacks Damarius Daniels and Eric Dickson, who ran the ball better than at any other time all night.

They combined to rush for 115 yards in the fourth quarter, both backs pounding and grinding out tough yards and both breaking tackles and cutting in and out of Greenville's defense, which had allowed only 151 rushing yards in the first three quarters.

After Farmer's game-changing play, the two backs and the OL took over and marched 68 yards in four plays with Dickson blasting open and diving over Greenville for 15 yards, and Daniels following that play with a tough 19-yard gain to the 31.

Then there was Daniels breaking free and weaving past Greenville for a 31-yard TD run with 8:32 left that lifted the Tigers to a 20-7 lead and into a share of first place on opening night in the district race.

It was a big night for the big boys up front as Kyleon Chambers led an OL that took over in the fourth.

"The offensive line was outstanding," said Wasson, who called Friday's game the biggest win of the year, "because we withstood ourselves."

Wasson's right. The Tigers got in their own way most of the night, and after racing to a 14-0 lead on their first two possessions they stuttered and stopped and staggered along while Greenville gained momentum.

It was a night littered with frustration for a Tigers team that suddenly forgot how to catch -- there were four dropped passes that were right on the money, including a sure touchdown pass that was followed by a missed chip-shot field goal attempt.

They also forgot when to snap the ball. There were two occasions when the ball was snapped before QB Solomon James was ready, and both resulted in fumbles. The Tigers didn't lose either, but they lost yards on both plays.

But they never lost the lead.

"We hadn't played with the lead before," Wasson said, pointing out how difficult it was for his kids to make that adjustment.

There were plenty of growing pains, but as Wasson said last week: "They're resilient" after watching his kids come back from 34-20 to beat Boswell 40-34 with a Daniels' 12-yard run with 34 seconds left.

This was a different kind of drama.

James and the Tiger offense looked unstoppable early, driving 47 yards in four plays and scoring on James' 16-yard run, and then coming right back on their second possession with a 53-yard drive that included a fourth-and-four play at the 14 that saw James race for a 7-yard gain. Two plays later, James connected with George Foster for a 9-yard TD, and Ethan Rodriguez nailed his second PAT with 2:33 left in the first.

They held on to the 14-0 edge, thanks to a gutsy goal-line stand in the second quarter that included two monster plays by nose guard Brayshun Parrish, who stopped the Lions at the 2 on second down and  then stuffed Greenville's big money-back Lester Turner for a 2-yard loss on third down. Parrish had a huge game that included recovering a second-half fumble.

The Lions finally scored on Stephens' 29-yard pass to Caleb Johnson with 6:31 left in the half. Things stayed that way despite the Tigers driving to the Lion 11 in the final minutes of the half and turning the ball over on downs after an incompletion on fourth-and-16 from the 17.

Then Farmer's big-hand swatted all that away.

Gordon Hayden Forester, a native of Athens, passed away December 30, 2021, at 68 years of age. He was preceded in death by his parents Sherman and JoAnn Forester. His survivors are a son, Trevor Forester and wife, April and granddaughter, Inara. Also two sisters, Lynne Forester Whatley, husb…