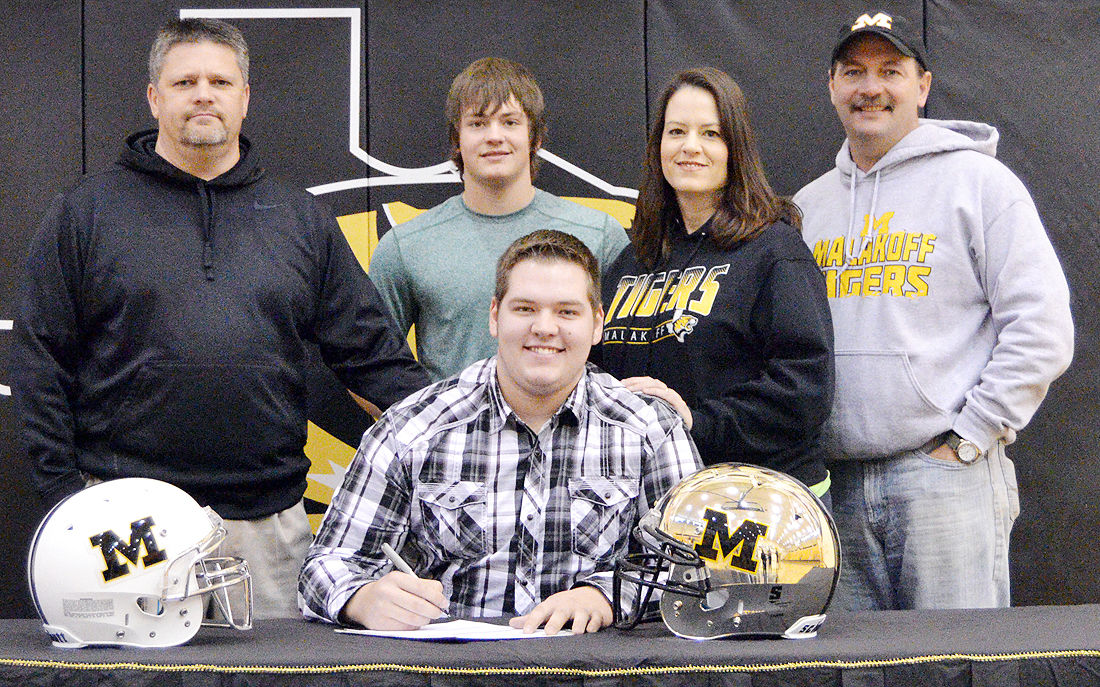 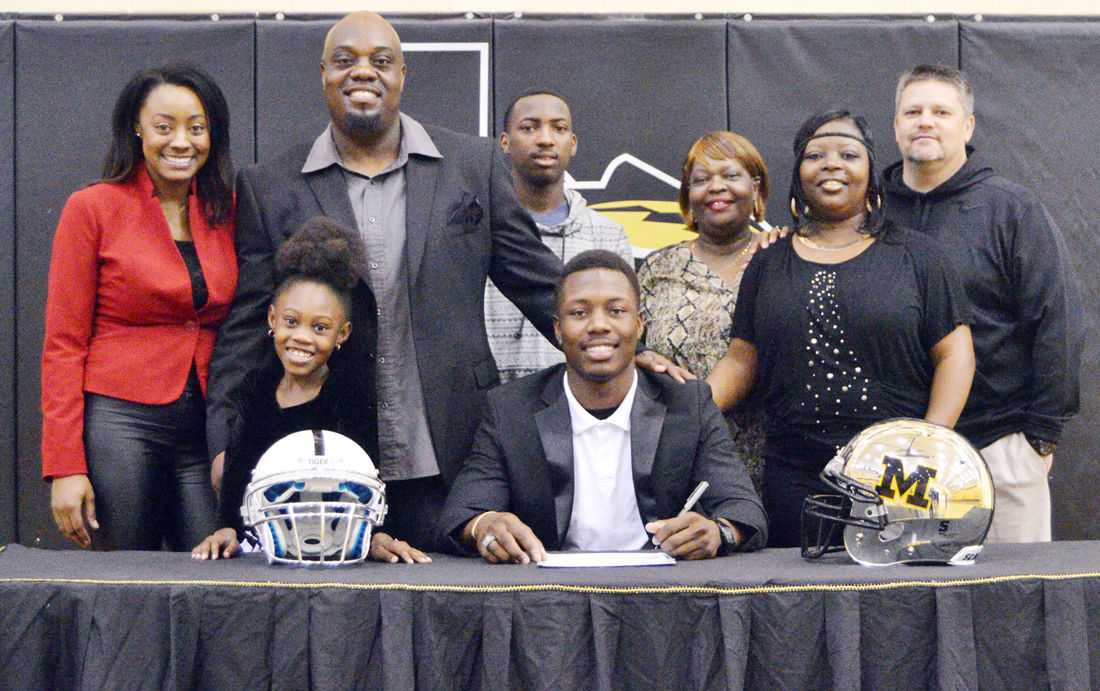 “It means a lot,” coach and athletic director Jamie Driskell said. “You want these kids to go off and be fine young men one of these days. It means a lot to us that they have put in the hard work and that it has paid off for them.”

Busch is heading to Wichita Falls as a member of the Midwestern State University Mustangs.

The road for both players came as a last minute decision on where to take their skills at the next level.

For Dowell, he made his decision known to TJC head coach Danny Palmer Saturday. Palmer will use Dowell as a running back following a senior season in which he was the Athens Daily Review All-Henderson County Player of the Year.

When asked if Saturday was the day he made his decision, Dowell responded with a laugh to the question.

“Yes sir,” he said with a laugh. “I would hope to be there in a couple of years and move up to whatever college I want to. He (Palmer) is excited that I am coming to his school and he was glad that I took his offer to help the team.”

Dowell ran for 1,466 yards on 153 attempts with 29 rushing touchdowns in 11 games for Malakoff this season.

Dowell said the decision to come to Tyler Junior College was based on a couple of different factors.

“I like the color and the school is bigger than most of the other junior colleges around,” Dowell said. “The coaches and the team are awesome and I hope we have a good season.”

He will have the opportunity to battle his cousin in Damontes Dowell during the next two seasons.

Damontes Dowell was the 2013 Athens Daily Review Most Valuable Player and is a member of the Trinity Valley Community College Cardinals.

Damontes is a wide receiver for the Cardinals and the friendly rivalry has already started between the two cousins.

“I am going to show him (Damontes) that I am better,” Dowell said. “We may be talking, we may not be talking that first game of the year.”

Driskell said having the opportunity to coach both of them will make that game fun to watch.

“That would be awesome and so much fun to watch,” Driskell said. “They love each other to death as they are first cousins and I would love to be able to see it.”

Driskell said Marcus has been the type of athlete every coach wants to have in their program.

“Marcus has been in our program since he was in seventh grade,” Driskell said. “He has never been in trouble or caused us any problems. He puts in the work and has been a fine young man to deal with day in and day out.”

Dowell said between now and the first day of fall camp he will concentrate on his classes and finishing out the basketball season.

He said he plans to major in music at Tyler Junior College.

Busch is an athlete who came to Malakoff for his senior season following a high school career at Canton High School.

Driskell said he did not want to see Busch leave the program as he will be a force to be reckoned with in college at Midwestern State.

“He was a good player when he got here. I would like to think that we hopefully made him a little bit better,” Driskell said. “He puts in the work and he is a great kid.”

Busch had a strong year for the Tigers as a Texas Sports Writers Association second team lineman.

He was also selected as an Athens Daily Review All-Henderson County first team lineman for the 9-2 playoff bound Tigers.

Busch said as he gets ready to make the trip to Witchita Falls, the Mustangs are a program on the rise.

“They were 6-4 last year I believe,” Busch said. “The whole school is about the football team and the president talked to us. It was really well run by coach (Bill) Maskill, who has been there for a really long time.”

Busch said Midwestern State has been contacting him for the past two seasons leading up to National Signing Day.

“Coach (Gary) McGraw is my recruiter for East Texas,” Busch said. “He came by last year and talked with me and said they had some interest. This year, he called me and said that he was really interested and they would probably offer.”

Busch said he plans to major in Electrical Engineering in college.

He said when he went on his official visit is when the decision was set.

“I went on my official visit and pretty much loved all of my coaches,” Busch said. “The place looks like a D1 school and it is really nice. I knew that is where I was supposed to be. I went to Southern Arkansas as well but I did not feel the same about it.”

Busch said he has already been told that he will be considered a redshirt for his freshman season.

A redshirt is when a player is told by a coach that the athlete participated in a college's academic year, but did not participate during that year's sports season. They are then allowed to have four more years of eligibility.

Busch said even with the designation, he is not bothered by the thought of not playing his freshman year.

“Not really. I am going into it knowing that they are going to redshirt me,” Busch said. “I know I will be stronger and faster and get to work a lot of scout team. I know that I will get to learn the plays so to me redshirt is a good thing instead of a bad thing for me.”

Busch said knowing his future is set as of National Signing Day has him happy about his college choice.

“It is a dream come true. I was nervous about going to a school and when the time came I was talking to three-or-four schools so it was stressful trying to dcide where to go,” Busch said. “I finally chose Midwestern State so it is like a load off my shoulders and my parents shoulders. It is a big relief.”

Driskell said he hopes both players do not let the emotion of the college game overwhelm them in the fall.

“I think both of them will go from the man on campus here to one of the crowd there,” Driskell said. “They will have to be able to adjust and be patient with being new. They are going to have to hang in there and I think the sky is the limit for both of them.”

Peggy Ruth Wathen, of Houston, passed away on May 22, 2020. She was born on October 16th, 1933 in Cross Roads to the late Reba Frances Wathen and James Richard Wathen. She is survived by her sister Joan (Wathen) Maniscalco and her husband Joseph; James R. Wathen and his wife Jeanne; nieces a…