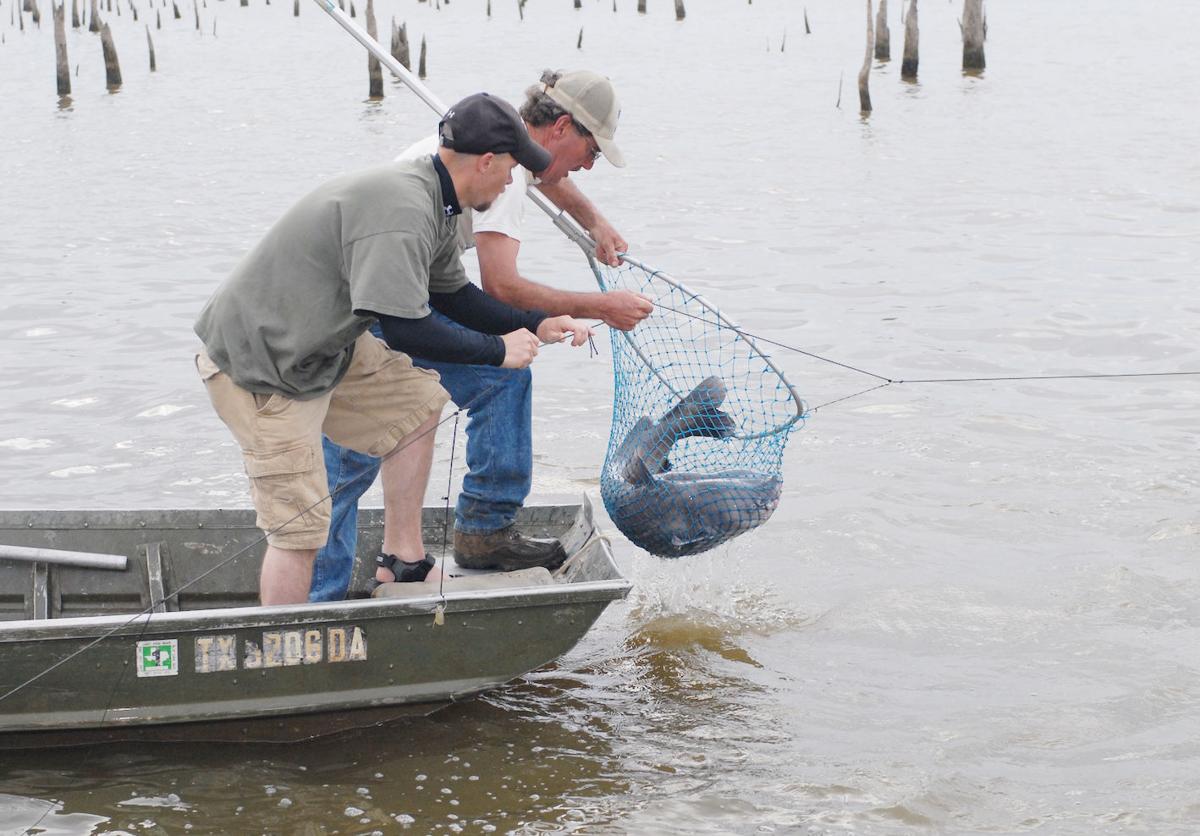 The Texas Park and Wildlife Department is proposing more restrictive rules on the use of passive fishing devices, including fewer days between required gear tag updates, more identification on gear tags and the addition of floats on all passive gear. 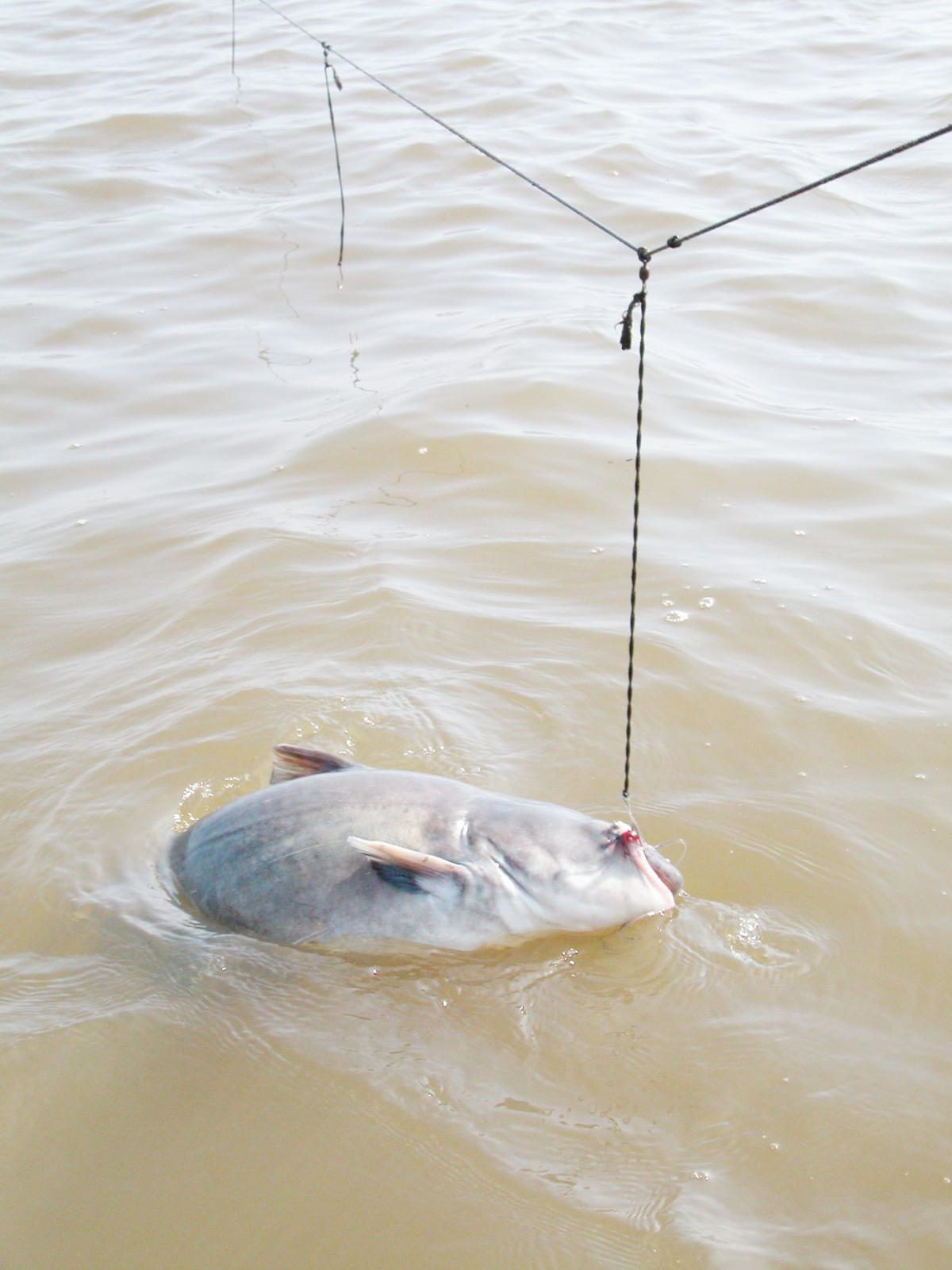 TPWD studies have shown that unbaited hooks on abandoned trotlines will continue catching fish for a considerable amount of time.

The Texas Park and Wildlife Department is proposing more restrictive rules on the use of passive fishing devices, including fewer days between required gear tag updates, more identification on gear tags and the addition of floats on all passive gear.

TPWD studies have shown that unbaited hooks on abandoned trotlines will continue catching fish for a considerable amount of time.

Texas fishermen who utilize trotlines, jug lines, limb lines, throw lines and other passive fishing devices to go after catfish are in the crosshairs of more regulation as Texas Parks and Wildlife Department lawmakers look to tighten the noose on the way the games are played.

On Nov. 7, the TPW Commission will meet in Austin to vote on a series of proposed rule changes related to passive gear usage. Among the proposed changes:

*Gear Tag Updates: Require that mandatory gear tags attached to passive fishing devices be updated every four days instead of the current 10 days.

*Gear Tag Identification: Require that a valid gear tag include the “customer number” from the owner’s fishing license, plus their name, address and date the device was set out.

*Float Marker: Require that all passive gear, including minnow traps (bream traps), be equipped with floats at least 6 inches long and 3 inches wide to mark the location of the gear. Recreational anglers may use floats of any color except orange. Commercial fishermen will be required to use orange floats.

It is not that passive fishing crowds are catching too many fish. Rather, some anglers are just downright sloppy when it comes to cleaning up after themselves by removing unintended devices in a timely manner. Others choose to ignore laws meant to identify ownership of passive gear and establish timelines in which the devices should be tended.

Many passive devices are totally abandoned in public waters after use by anglers who set them. Lines and hooks used to build the devices can remain intact for years, creating potential hazards or problems for other boaters and anglers while posing an ongoing threat for fish and a wide variety of wildlife.

If passed, TPWD is hopeful more the more restrictive regulations will be viable steps towards cutting down on the harmful, wasteful impacts and potentially dangerous consequences that can result when passive fishing gear is left abandoned in freshwater rivers, reservoirs and backwater oxbows.

“Abandoned passive fishing gear is not easily identified and can harm fish and wildlife resources and present a nuisance and safety hazard to recreational users of public water bodies,” Jarret Barker, TPWD Assistant Commander for Marine Enforcement said in a recent TPWD news release. “These proposed changes would aid in identifying and monitoring lawful passive fishing gear and help facilitate the removal of abandoned gear.”

Passive Fishing: What is it?

Passive fishing is referred to as such because it involves placing some sort of static fishing gear in the water and waiting for the fish to approach it, often while unattended. It's directly the opposite of "active fishing" methods like rod and reel fishing, where the angler actively chases or pursues fish using a hook, line and bait of some sort.

As earlier mentioned, there are several devices used in passive fishing:

Trotline: Trotliners often tether lengths of heavy nylon twine equipped with dozens of sharp hooks between two stumps. Hooks are baited with live perch caught in traps, cut bait, minnows or shad. Lines are submerged just below or several feet below the surface.

Current Texas law allows each angler to have as many 100 hooks in a water body at one time. A single line may contain as many as 50 hooks.

Three fishermen sharing the same boat could have as many as 300 hooks in the water simultaneously. At 20 hooks per line, that’s 15 different lines.

Trotliners and other passive fishermen typically bait up at night and return the follow morning to “run” the lines and hopefully collect some fish for the freezer.

Jug Line: A jug line is made by tying a length of heavy line to a 1-2 gallon plastic jug. It is legal to have as many as five hooks spaced out on a jug line. When a fish eats the bait it will usually hook itself.

Many anglers prefer to stay with their jugs so they can quickly retrieve fish that take the bait.

Left overnight, there is a risk the jug could be dragged away by a large fish and possibly never found by the rightful owner. The same is true of single line devices made from swim noodles.

Throw Lines/Limb Lines/Stump Hooks: These are single lines usually secured to the limb of an overhanging tree, a stump or some other fixture. They usually contain only one hook, but may have as many as five.

Done correctly and responsibly, passive fishing is an enjoyable and productive way to catch fish. It’s the careless or lazy individuals who don’t follow the rules and trash up public waters that cast a bad light on those who do things right.

Those who choose to abandon their passive devices rather than removing them leave behind a wealth of potential problems that may continue to surface for weeks, months and even years down the road.

Abandoned lines can wrap on boat propellors, snag fishing lures and pose hooking threats for fishermen. They also continue to catch and kill fish, while spelling potential trouble for turtles, herons, pelicans and other wildlife that may get hooked or tangled within them.

Charlie Shivley of Strong knows the situation all too well. Shivley and his wife, Rhonda, own Bill’s Landing. The lakeside fishing camp is located at the upper reaches of Toledo Bend Reservoir. It’s a trotliner’s hub.

Shivley says the lake is teeming with derelict trotlines. He said the lines aren’t that noticeable when the lake is full, but they are pretty easy to see when the water level gets low like it is now (about 7 feet).

“We’ve been seeing lines lately that probably haven’t been run in 10 years, and some them are right at water level,” he said. “I hung one  with my outboard the other day. Luckily, it broke and didn’t wrap up around my prop.”

Shivley recalled 2011, when the lake dipped to 12.3 feet below full — an all-time low. “Old lines were hanging everywhere,” he said. “They looked like spider webs in places. It was dangerous. I found one that was stretched chest-high across an old slough. The stainless steel hooks were almost as shiny as the day they were put out.”

Immersed in water those bare hooks will continue to catch fish, too, he said.

“Stainless steel hooks are shiny and fish will hit them with no bait,” Shivley said. “If you had all of the fish that are caught on abandoned lines on this lake in one day it would amaze you.”

Based on his observations, Shivley says he understands why TPWD is seeking stricter laws on passive fishing. However, he believes any changes in the law will be ineffective unless they are enforced.

“I think going to a four-day update on gear tags is pretty extreme,” he said. “I’d really like to see them leave it at 10 days and start nailing some of the ones breaking the law. Make it a heavy fine. Word would get around and stop some of it. As it is we don’t see many game wardens around here. I’ve lived here for 35 years and spent 1,000s of hours out there running trotlines. I’ve never been checked the first time.”

Ongoing research studies being conducted on trotlines by TPWD fisheries scientists confirm Shivley’s notion that the devices continue to “ghost fish” long after they have been abandoned. Those studies — carried out on lakes Corpus Christi, Sam Rayburn and TPWD-controlled ponds in Athens — also have shown that catfish and turtles caught on trotlines can begin to perish as soon as 2-4 days, according to fisheries biologist Dusty McDonald of Mathis.

McDonald said those findings are what fueled the recommendation to reduce the number of days for updating gear tags from 10 days to four.

While abandoned passive devices and neglect of gear tagging requirements are problems that need to be dealt with statewide, there are some legal barriers that hinder the process.

According to Barker, derelict fishing gear is recognized as private property under current state law. A private citizen who cuts or removes an abandoned or unmarked trotline could be found in violation of the law.

Law enforcement officers are the only ones currently authorized to remove illegal devices from public waters, and they must leap some frustrating legal hurdles before they can do anything with them.

Barker said the first step is notifying the local judge that the device has been seized, after which notice must be posted at the county courthouse.

If no one claims the illegal gear after 10 days, wardens must go back to the judge to get a destruction order.

It would be nice to see some changes made in state statutes to make it easier and less time-consuming for game wardens and county governments to deal with and dispose of abandoned and illegal fishing gear. But the wheels of politics turn slow, and soonest such an amendment might be expected is 2021 with the meeting of the 87th Texas Legislature.

The TPW Commission elected to skip the public hearing process on the passive gear proposals, but the agency is taking public comment on the proposals up until the Nov. 7 meeting. If passed, the new rules will become effective Sept. 1, 2020.

Comments may be directed to Barker at (512) 389-4853 or jarret.barker@tpwd.texas.gov. Comments also may be submitted at www.tpwd.texas.gov/business/feedback/public_comment/, or in person during the TPW Commission meeting in Austin.