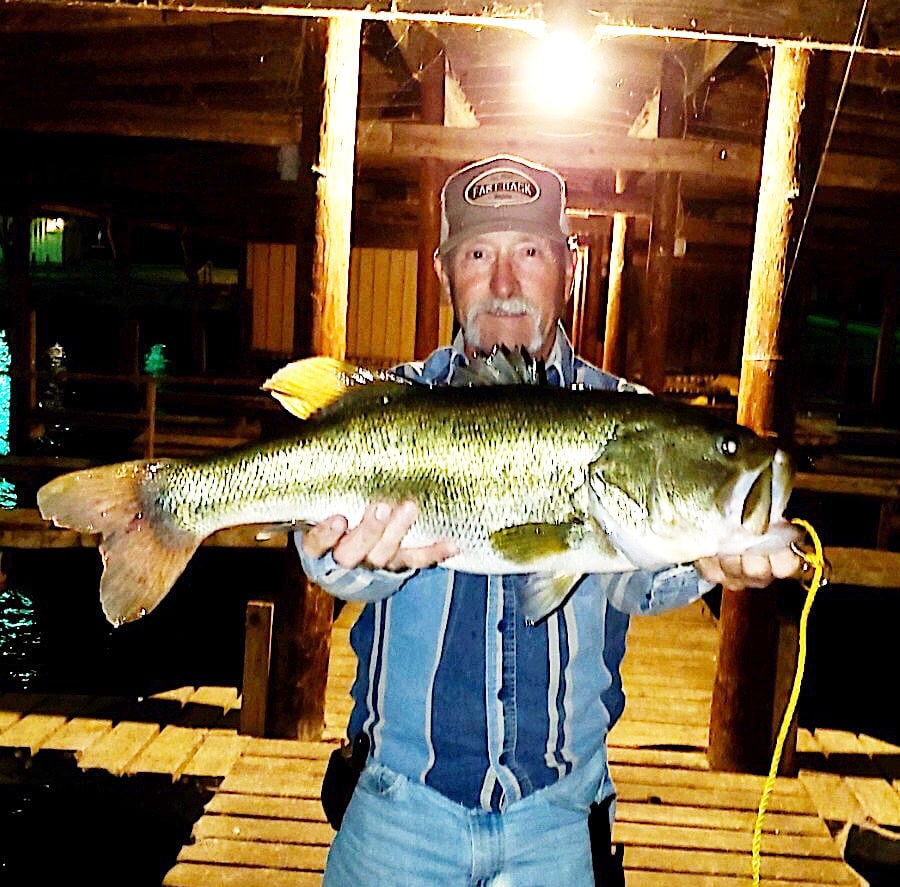 Jim Crockett was fishing from the shores of Houston County Lake near Crockett on the afternoon of Oct. 20 when he caught and released what may be the biggest bass reported from the 1,300-acre reservoir since 1990. Crockett, 63, said the fish weighed 14.1 pounds on an uncertified digital scale. The bass hit a 1 ounce Rat-L-Trap in about 15 feet of water. 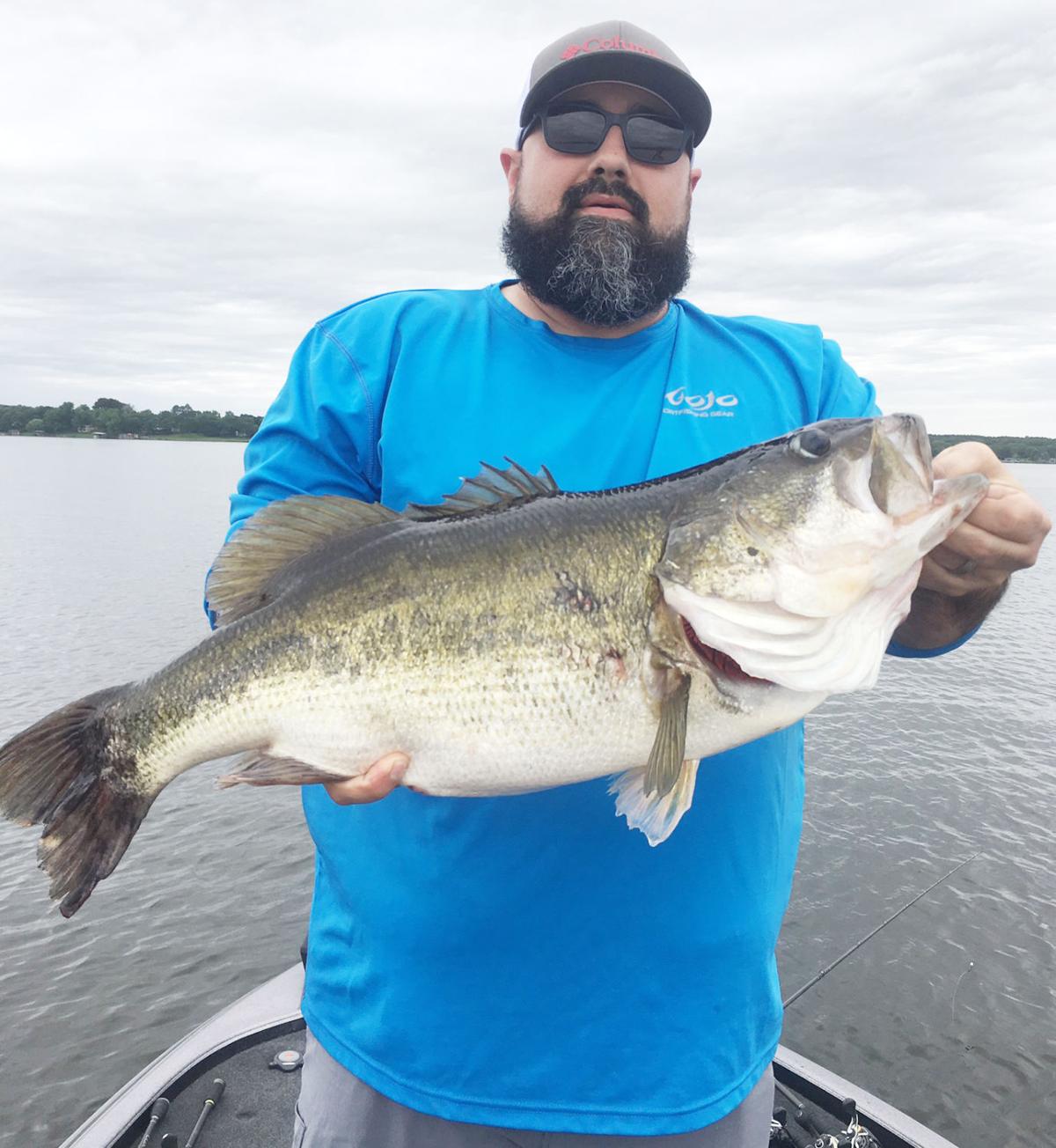 Robert Scruggs’ 12.81 pounder caught from Lake Athens last May is one of several double-digit bass reported around the state since last spring.

Jim Crockett was fishing from the shores of Houston County Lake near Crockett on the afternoon of Oct. 20 when he caught and released what may be the biggest bass reported from the 1,300-acre reservoir since 1990. Crockett, 63, said the fish weighed 14.1 pounds on an uncertified digital scale. The bass hit a 1 ounce Rat-L-Trap in about 15 feet of water.

Robert Scruggs’ 12.81 pounder caught from Lake Athens last May is one of several double-digit bass reported around the state since last spring.

It was just beginning to turn dusky dark on the afternoon of Oct. 20 and Jim Crockett of Brock was in his happy place doing what he loves. Standing on the shores of Houston County Lake, the 63-year-old angler lofted a 1 ounce perch color Rat-L-Trap into the 1,300-acre reservoir.

“I’ve been here for about 2-3 months, working on a pipeline,” said Crockett. “I like to take my lawn chair down by the water in the afternoon and fish after work. It’s a good way to get away from things. It’s what we do to relax.”

Crockett said he and a co-worker, Jesse Mathis, also from Brock, had been fishing from the bank on a small point for about two hours without catching much. Crockett’s luck changed in a big way moments after he made a cast into about 15 feet of water and began a slow, methodical retrieve.

“There’s a creek channel out there that winds right up next to an old boat dock,” he said. “The shad show up there just about every afternoon. You’ll see an occasional swirl when the bass start to feed. Sometimes they jump clear out of the water. It’s a pretty good spot.”

Crockett said his lure was about 10 yards from the bank when he got the bite he was waiting for.

“I knew right away it was big,” he said. “The fish was really strong. I was using 20 pound test line, but I wasn’t sure if it was going to hold or not. It pulled a lot of drag.”

As every good fishing partner should, Mathis had Crockett’s back. Once the big bass was worn down, Mathis waded into the water and helped wrestle it to shore. What the two men discovered was a largemouth bass bigger than most fishermen have ever seen.

“I caught a 13.2 pounder out of a stock tank near Weatherford several years ago,” Crockett recalled. “I could tell by looking this one was bigger,” Crockett said.

The lakeside marina had already closed for the day, so there was no place to weigh the fish on scales that had been verified for accuracy. Crockett said he didn’t want to risk killing the fish by holding it overnight, so he weighed it on a digital scale, took a picture and released the bass back into the lake. The angler said the hand-held scale read 14.1 pounds.

“It was a beautiful fish, really thick and healthy,” he said. “I made a point not to keep her out of the water very long. She took off once I released her. Hopefully somebody else will catch her again one day.”

The big bass is more than just a new personal best for the casual angler. If the scale used to weigh the bass is remotely accurate, Crockett’s fish may be biggest bass caught from Houston County in nearly 30 years.

According to Texas Parks and Wildlife Department water body records, the lake record largemouth for Houston County Lake is a 15.20 pounder caught in February 1988 by Terry Walling of Tennessee Colony. Only two other Houston County bass topping 13 pounds have been reported since, a 14 pounder and a 13.25 pounder. Both fish were caught during the spring of 1990 and turned over to TPWD’s Toyota ShareLunker program.

Although Houston County has been off the ShareLunker radar in recent years, it is no stranger to Texas’ big bass circles. There was a time when the lake 10 miles northwest of Crockett was regarded as one of the “best little big bass lakes” in Texas.

Throughout the 1980s, Houston County cranked out 6-9 pound bass almost like a gum ball machine. Much of the lake’s early success can be attributed to Florida bass, a strain known for growing faster and significantly larger than native northern largemouths. Houston County was among the first reservoirs in the state to be stocked with Floridas in the early-to-mid 1970s.

Sadly, however, the lake’s heyday occurred before catch and release was widely accepted. Many of the big fish that were caught from the lake during its prime were either filleted or killed for mounting by the anglers who reeled them in.

John Hope of Brackettville guided on Houston County for about eight years from the mid-1980s through the early 1990s. He says he lost count of the number of fish over 7 pounds that he put in the boat. His personal best was a 12.8 pounder, but he guided clients to bigger ones.

Hope was widely known for conducting a tracking study on big bass using electronic transmitters to follow monitor movements of the fish. The study originated on Houston County before he expanded it to other lakes.

“The number of big fish that were caught out of that lake back in the 1980s was unreal,” Hope said. “It was almost like somebody was stocking 9-10 pounders in there. Trucks and trailers used to line up and down the road and people came there from all over the world. Some of the big bass were released but a bunch of them weren’t. The fishing pressure eventually took its toll. It’s only 1,300 acres. A lake that size can only take so much.”

Catherine Markham’s family has owned a lakeside marina on Houston County for 38 years. Markham says she was pleased to hear about Crockett’s 14 pounder, but says it didn’t come as a total surprise.

“I think there’s a 20 pounder out there somewhere,” she said. “We still hear about for see quite a few 8-10 pounders, but there are a bunch we don’t hear about, either. A lot of anglers around here are pretty tight lipped about the big fish they catch these days.”

Another factor that makes Crockett’s 14 pounder unique is the timing of the catch. Reeling in such a big fish during the fall isn’t unheard of, but it is somewhat of an anomaly.

Most Texas teeners, which are invariably females, are caught from late winter through spring, when the fish are heavy with eggs. It’s also a period when the fish are prone to move shallow for spawning, which naturally makes them more vulnerable to being caught.

Interestingly, Crockett isn’t the only Texas angler in recent times to crack a double-digit bass outside the traditional lunker window. A pair of 13 pounders have been reported from Lake O.H. Ivie near San Angelo since late September.

The heaviest of the two fish, a 13.23 pounder, was caught on Oct. 5 by Curtis Duncan of Brownwood. Duncan’s fish was weighed on a certified scale at Elm Creek Marina. It was subsequently accepted into the Toyota ShareLunker program as a Legend Class entry. The second fish, an uncertified 13.0 pounder, was caught on Sept. 26 by Ron Luitsi of Midland, according to Elm Creek’s Rhonda Wilson.

That’s great news from the 19,000-acre reservoir near San Angelo, which hasn’t had a 13 pounder since 2012. The lake appears to be making a rebound after years of low water resulting from prolonged drought. ‘Ivie is currently 70 percent full, up 33 percent (nearly 15 feet) from a year ago.

Brookshear added that close to 300 ShareLunker entries have been accepted in 2019, the majority outside the Jan. 1 - March 31 spawning window for Legacy Lunkers 13 pounds and larger. The program is now open year-round online entries in three additional categories. To learn more, visit texassharelunker.com.

Texas’ 2019-20 duck and goose hunting seasons are set to get underway in early November in most of the state. The only exception is the High Plains Mallard Management Unit in the Texas Panhandle, which opens for two days Oct. 26-27 before reopening Nov. 1 - Jan. 26, 2020.

The daily bag limit on ducks is six per day, no more than 5 mallards, of which only 2 may be hens, 3 wood ducks, 3 scaup, 2 redheads, 2 canvasback, 1 pintail, 1 “dusky duck” (mottled, black or Mexican-like) may only be taken after the first 5 days of the season in the respective zones. Mergansers: 5/day with no more than 2 hooded mergansers. Coots, 15 per day.