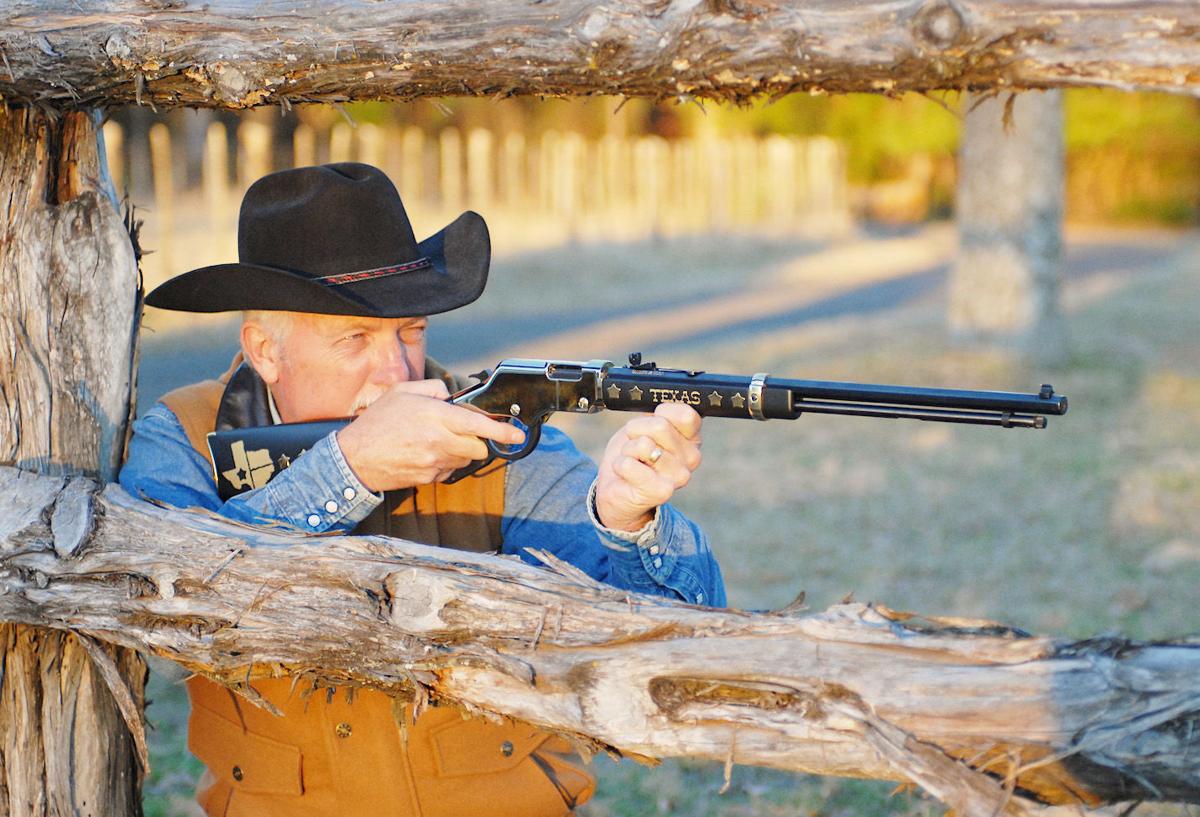 Henry’s Texas Tribute Edition is a sweet-shooting .22 caliber built on the same platform as the company’s popular Golden Boy. It features an attractive design motif inspired largely by Texas history and the oil boom of the early 1900s. 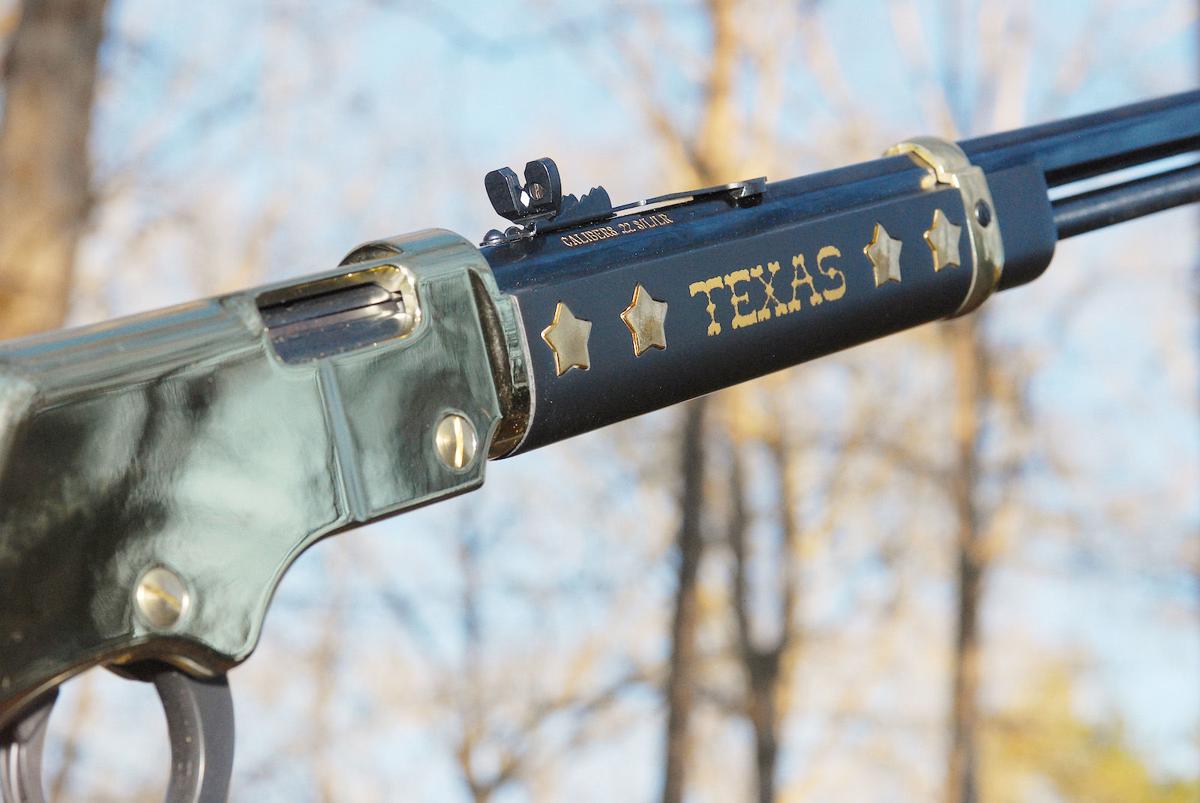 The golden “TEXAS” insignia stands out in stark contrast to the rifle’s dark black stain. 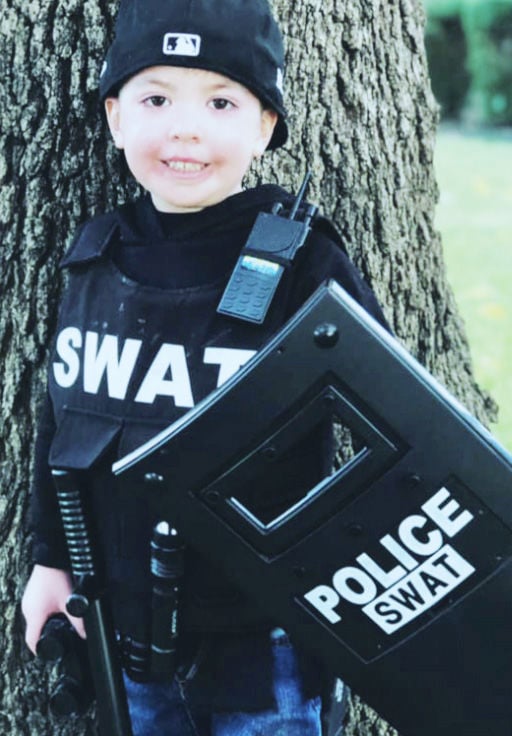 Henry’s latest “Guns for Great Causes” campaign will benefit 4-year-old Beckett Burge of Princeton. Burge is suffering from acute lymphoblastic leukemia. In January, Henry will sell/auction 60 special edition “Beat It Like Beckett” rifles with all proceeds going to the youth’s family to help with medical bills.

Henry’s Texas Tribute Edition is a sweet-shooting .22 caliber built on the same platform as the company’s popular Golden Boy. It features an attractive design motif inspired largely by Texas history and the oil boom of the early 1900s.

The golden “TEXAS” insignia stands out in stark contrast to the rifle’s dark black stain.

Henry’s latest “Guns for Great Causes” campaign will benefit 4-year-old Beckett Burge of Princeton. Burge is suffering from acute lymphoblastic leukemia. In January, Henry will sell/auction 60 special edition “Beat It Like Beckett” rifles with all proceeds going to the youth’s family to help with medical bills.

Christmas came early in the country this year as I took delivery of my first-ever Henry rifle shortly after Thanksgiving. It probably won’t be the last.

Well known for their stylish lines, premium quality and large stable of models and calibers, Henry Repeating Arms is an all-American brand founded on a straight-shooting tradition dating way back to 1860.

Fittingly, it was dubbed the Henry rifle.

Stealing from a little Henry history, the rifle was used by Union soldiers in the Civil War.

With a holding capacity of 16 rounds, the breech-loader was believed to provide a single man with the firepower of a dozen marksmen armed with muzzle-loading muskets. Confederate Colonel John Mosby called it “that damned Yankee rifle that can be loaded on Sunday and fired all week,” following his first encounter with the Henry in the battle between the states.

Based in New Jersey, with a second manufacturing facility in Wisconsin, Henry Repeating Arms claims no affiliation or lineage to B. Tyler Henry, or to the New Haven Arms Company, which sold the original Henry rifle from 1862 to 1864.

The company was founded in 1996 by the father/son team of Louis and Anthony Imperato, the same year they secured the trademark to the Henry name.

The Imperatos have been building fine firearms ever since.

Today, Henry employs more than 500 people and ranks as the leading manufacturer of lever action rifles in the country.

That’s your history lesson for the day. Now, on to the Henry rifle that I recently fetched from a local dealer for field testing — the Texas Tribute Edition.

It’s the newest member of Henry’s budding fleet of Tribute Edition .22 caliber rimfires. The distinguished line-up includes more than a dozen rifles honoring a wide range of constituencies from military heroes to firefighters.

The Texas Tribute model, unveiled in November at the Texas Motor Speedway, is the first dedicated to a specific state.

The handsome rifle is built around Henry’s popular Golden Boy platform and features a design motif founded on Texas history.

Interestingly, the inspiration for the rifle roots back to Jan. 10, 1901, the most famous date in the Texas petroleum industry. That’s when a great gusher erupted in an oil well being drilled at Spindletop Hill near Beaumont.

Henry captured the essence of Texas tea in the rifle’s deep, black finish and golden highlights including a series of strategically placed stars, “TEXAS” engraving and a state outline hand-painted on the buttstock.

HRA president Anthony Imperato says the Texas Tribute rifle is the culmination of significant forethought that went into building a special gun to pay homage to a special state known around globe for its core values, distinctive pride and unparalleled fondness for firearms.

“Texas loves guns, and we wanted to make sure that this rifle captures that unique Texas magic with a look that no one has ever seen before on a Henry,” he said. “I think we nailed it.”

While the rifle is sure to appeal to collectors, it’s a real pleasure to shoot, too, whether plinking at targets or hunting small game.

Weighing in at nearly 7 pounds, it comes with a 20-inch octagon blued steel barrel, adjustable Semi-Buck horn rear sight and a tubular magazine that holds up to 21 .22 caliber shorts or 16 long rifle cartridges. It is drilled and tapped so it can be fitted with a with scope if you want. The rifle retails for $960.

There’s plenty to like about a Henry rifle, but there may be even more to love about the company’s “Guns for Great Causes” program. It’s the charitable component of the company that takes aim on helping to raise money individual children fighting nasty diseases, children’s hospitals, veterans organizations and conservation causes.

The program started in 2006 and has since raised well over $3 million for charity, including more than $200,000 that has been given directly to the families of sick children, according to Daniel Clayton-Luce, HRA’s director of communications.

Luce says a high percentage of the funds are raised through the sale or auction of limited edition rifles designed with special causes in mind. To wit:

In 2017, Henry donated 54 custom rifles that raised $70,000 for the family of a New York teenager diagnosed with hypoplastic left heart syndrome.

The money was raised to help the youth’s family with the cost of a heart transplant.

Henry’s most recent Guns for Great Causes campaign strikes much closer to home with Texas ties to Collin County.

Burge, 4, was diagnosed with acute lymphoblastic leukemia more than a year ago and has been undergoing intensive chemotherapy treatments ever since.

Burge’s situation made national news in September after his mother posted a touching photo on social media depicting the youngster as he was being comforted by his older sister, Aubrey. HRA owner and president Anthony Imperato heard about the child’s condition and decided to act.

Luce said the “Beat It Like Beckett” rifles will be sold for a set price of $500 each on Henry’s website.

A 60th rifle wearing the unique serial number “BECKETT01” will be auctioned to the highest bidder through a local gun dealer, Luce said.

The “Beat It Like Beckett” edition rifles are a unique configuration with a large loop lever, a brushed metal receiver cover, and a 17” blued steel octagon barrel. The genuine American walnut buttstock engraving portrays a hand-painted gold ribbon, the symbol for the fight against childhood cancer, and the words “Beat It Like Beckett.”

Luce said all proceeds from the sale and auction of the limited edition rifles will be given to the Burge family to assist with medical costs associated with the youth’s prolonged treatment.

For more information on Henry rifles or learn more about the upcoming “Beat It Like Beckett” benefit, see henryusa.com.