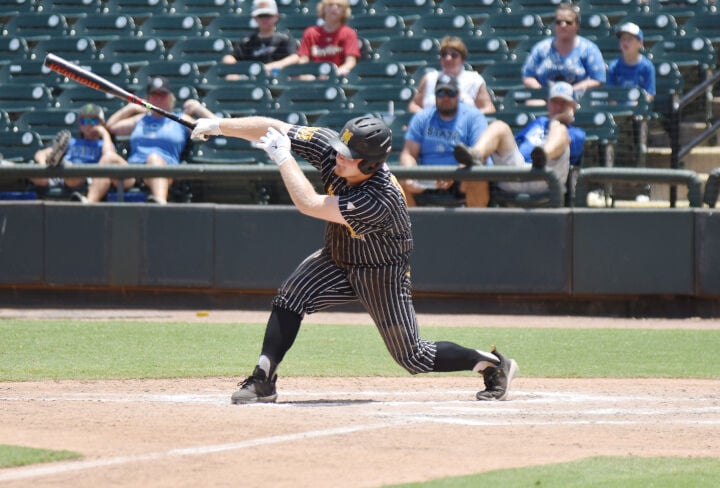 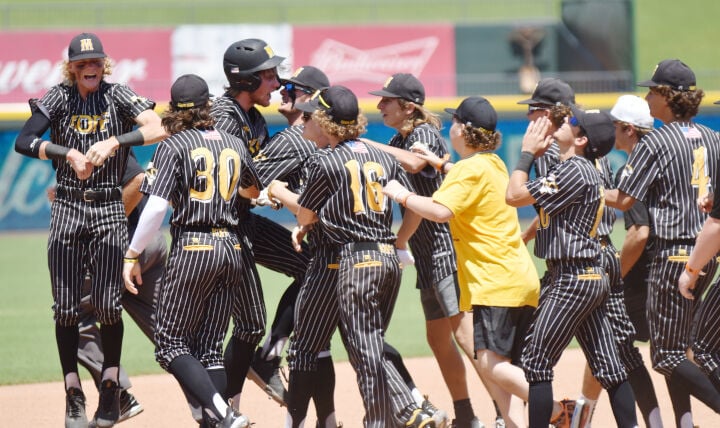 Members of the Malakoff Tigers celebrate a 4-3 victory over Gunter in the state semifinals Friday at Dell Diamond. The Tigers played in the state final against the London Pirates Saturday.

Members of the Malakoff Tigers celebrate a 4-3 victory over Gunter in the state semifinals Friday at Dell Diamond. The Tigers played in the state final against the London Pirates Saturday.

ROUND ROCK – The road to the state title has one more opponent following a 4-3 win Friday in the state semifinal.

The Tigers came back in the bottom of the seventh for the 4-3 win over the Gunter Tigers.

“Brandon Nations had the big time hit and to do it in the bottom of the seventh was big,” Malakoff coach John Adair said. “You could tell that they were trying to pitch around Cole and I am not real sure why. To get the clutch hit was awesome. That is the way that played it all year long battling.”

The game winning hit came with one out and two on following a single by Bryson Adair and a walk to Cole Gaddis. Nations then smacked the double off Gunter reliever KK Rigsby to send the Tigers to the state title game.

“It was trying to stay calm and I didn’t need to do too much,” Nations said. “I knew a home run could do it but a base hit would have done it as well. I did that and got the job done.”

The last time a Henderson County area team played in the state tournament was the 1993-94 season when the Trinidad Trojans lost to Gunter, 9-4, in the Class A state final. This is the eighth state tournament appearance for Gunter.

“That is a team that has been here and has won it,” Malakoff coach John Adair said. “We knew even though none of those kids were here, that tradition is a big deal and we came in and knowing I was retiring, I was establishing a program here. This was not a two years and done deal and we want this to carry over.”

Nations had a huge day for Malakoff (37-7) at the plate as he went 3-for-4 with four RBI and one run scored. He had an RBI double in the first that scored Gaddis for the 1-0 lead.

He then and then a two run home run in the third that landed in the Malakoff bullpen in left center to give them a 3-0 lead.

“I typically hit good against lefties and he was leaving them over the plate so I was getting all over them,” Nations said.

Riekkhan Bostick cut the Malakoff lead to 3-1 with an RBI triple to center field off starter Alan Benhardt. Nash Daniel came in to score.

Gunter (36-9) then tied the game at 3 off reliever Judd Driskell with a two-run double by Daniel scoring Landon Pelfrey and Colton Jolly.

Nations said Daniel had got lucky on the double to center field.

“Even with Judd, the kid got lucky and got the ball over Alan so it was a big hit for them,” Nations said. Wes (Hustead) came in and did his job and closed the door and did a phenomenal job.”

Adair said he was proud of the way that his team battled throughout the contest in picking up the win.

“This is what we have talked about all year long is the game and the adversity in a ball game,” Adair said. “You have to stay even keel and pass the torch to the next guy. It all came true tonight and the kid kept believing and get the job done.”

Malakoff had hits from Bryson Adair, who went 1-for-4 with a run scored. Gaddis went 1-for-2 with two runs scored and Nathan Jones went 1-for-2.

Benhardt finished the night with one run on four hits with eight strikeouts and three walks. Hustead was credited with the win as he went two innings with no runs on one hit and three strikeouts.

NOTE: The state title game on Saturday was the final game for head coach John Adair, who is retiring after 37 years of coaching, 32 of them at the high school level. … For more on the state title game, check out the Tuesday print edition of the Athens Daily Review.

Carlon Rogers Dowell, born August 24, 1941 in Athens, passed peacefully at home in the arms of his wife of 61 years. He left earth to go to his Heavenly home April 1, 2020. Carlon was preceded in death by his parents, A.A. "Nate" and Christeen Dowell of Athens, brother Adrian Dowell of Athen…