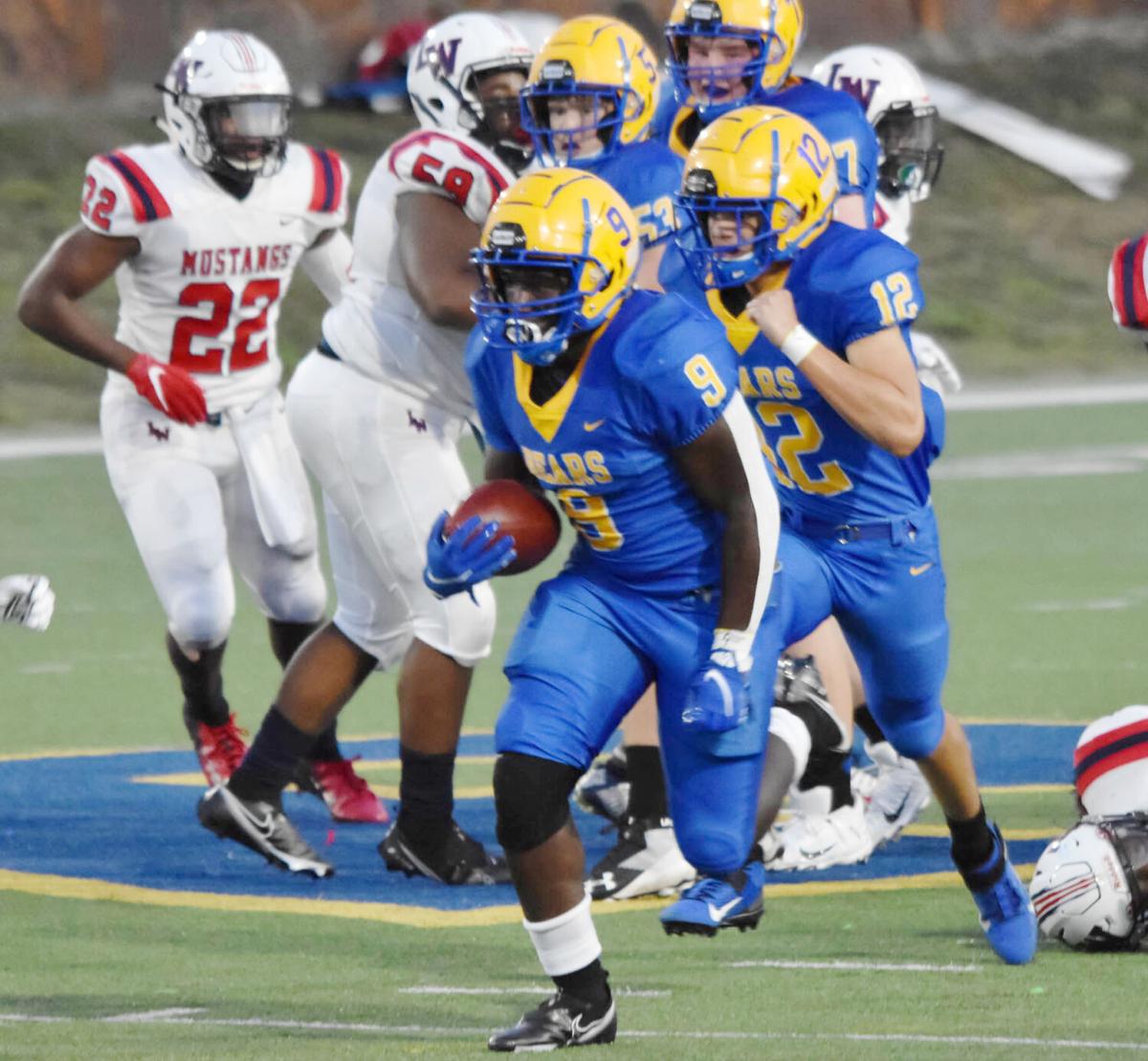 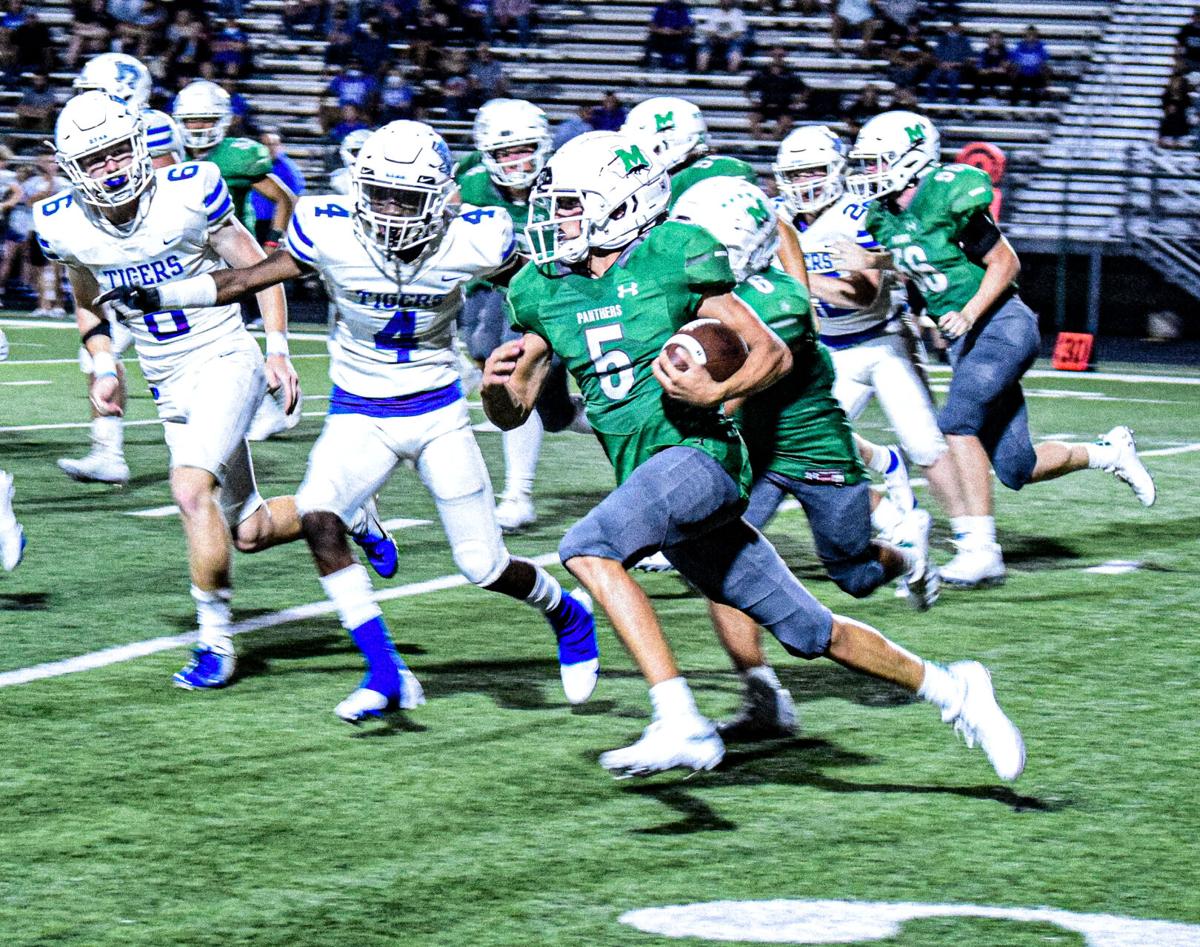 Mabank's Kirby Hargett looks to run past a Wills Point defender in their shutout victory Friday.

Mabank's Kirby Hargett looks to run past a Wills Point defender in their shutout victory Friday.

Here are the Week 3 recaps for the Henderson County area schools for Friday night.

BROWNSBORO – On a much cooler Friday night, the Brownsboro Bears and Life Waxahachie Mustangs played intense football. The final score was 21-14 in favor of the Mustangs.

Brownsboro Head Coach Greg Pearson said, “We sure needed that game. It’s harder since we led the whole game. They were extremely fast, but our guys stuck with the game plan, and played hard.”

Drawing first blood was Ty McKenzie with a 4 yard touchdown run for the Bears. Jorge Vicente kicked the extra point with 10 minutes to go in the first half.

The Mustangs came right back on a 69 yard pass play from Del McCoy to Jaren Mann. The Bears struck paydirt again on a 7 yard blast from JaTavien Sessions. Vicente again added the extra point to extend the Brownsboro lead to 14-6.

The final score of the half was Mann again for the Mustangs. A spectacular 59 yard run followed by Dominique Vidrine’s extra point made the halftime score 14-13, in favor of the Bears.

In the first half Mann was the man for the Mustangs, both offensively and defensively.

While the offensive line of Magrill, Arthur, Cofer, Hernandez, Tristan, Clague, and Hardin did some great things for Brownsboro, Dallis Tate made some outstanding plays for the Bears defense.

The second half was a true defensive struggle. Four goal line stands, two by the Mustangs and two by the Bears. Both teams had drives but the defenses really upped their play in the red zone.

In the final two minutes Mann for the Mustangs broke for his third touchdown of 30 or more yards. McCoy ran in the two point conversion for a 21-14 advantage. The only time the Mustangs led the whole game.

MALAKOFF – It was a high-scoring affair between the Malakoff Tigers and Trinity Christian Cedar Hill Friday at Tiger Stadium.

In the end, Trinity Christian came away with a 56-32 victory over the Tigers to drop coach Jamie Driskell’s team to 1-2 on the season.

The Panthers pounced on the Tigers and never looked back rolling to a 42 – 0 shutout at home.

The Panthers used a balanced attack to wear down the Tigers on both sides of the ball.

The Tigers had no answer for the Panthers who had 444 yards of offense on the night.The Panthers scored six touchdowns on the night and were 6-6 on extra points.

The Panther defense swarmed the Tigers and never let up holding the Tigers scoreless.

The Panthers executed flawlessly in route to their second win of the season.

Mabank travels to Canton next week to take on the Eagles.

CROSS ROADS – The Cross Roads Bobcats had another tough outing in a 57-8 loss to Rio Vista Friday at Rock Tower Stadium.

The Bobcats (0-3) returns to action Friday as they host Dallas Gateway. Kickoff for the game is set for 7:30 p.m. from Rock Tower Stadium.

PALESTINE – The Eustace Bulldogs ran into a talented team Friday in a 50-28 loss to the Westwood Panthers Friday at Panther Stadium.

Eustace (1-2) returns to the Boneyard Friday as they host the Scurry-Rosser Wildcats. Kickoff is set for 7:30 p.m.

SCURRY – The Kemp Yellowjackets dropped their third straight contests of the year in a 21-14 loss to the Scurry-Rosser Wildcats Friday in Scurry.

Kemp (0-3) is scheduled to host Blooming Grove Friday at Yellowjackets Stadium. Kickoff is set for 7:30 p.m.

OAKWOOD – The Trinidad Trojans were shutout at the hands of the Oakwood Panthers Friday in Oakwood.

Carl Eugene Keesee passed away September 11, 2020. He was born in Hollis, OK on July 29, 1948 to parents Claud Eugene and Laverne Keesee. He was preceded in death by his parents, Claud and Laverne, his grandparents, his brother Billy Joe Keesee and a niece and nephew. He is survived by Thres…

Kay Elaine Sanders went to be with her Lord on August 17, 2020, shortly after being diagnosed with pancreatic cancer. Kay was born in Tyler, Texas on January 22, 1959. She was preceded in death by her parents, Gloria Jean and Kenneth Lowell Sanders. Kay graduated from John Tyler High in 1972…