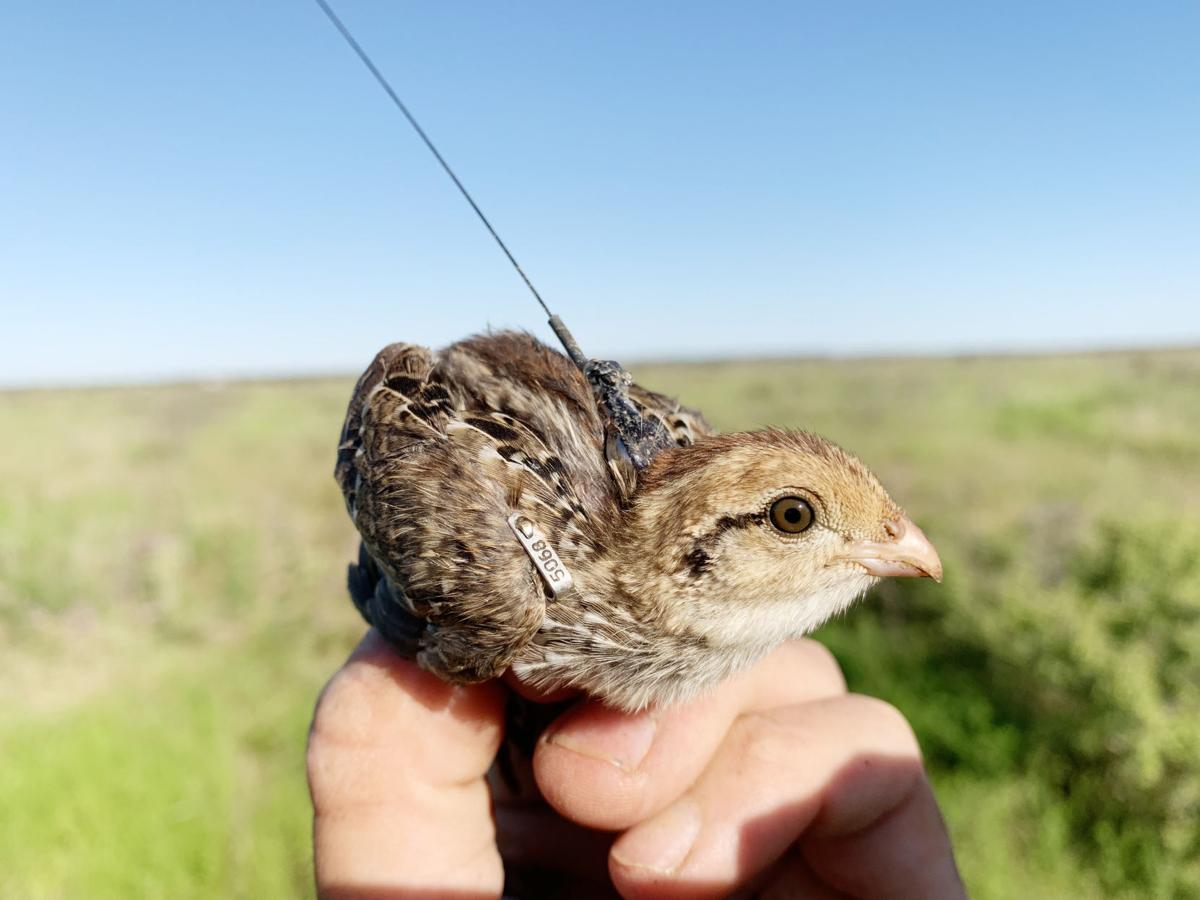 Grant monies passed out the Park Cities Quail Coalition continue to fund a number of quail research projects around the state. Here, a quail chick is fitted with a radio transmitter prior to release as part of a telemetry study conducted on the 6666 Ranch by the Quail-Tech Alliance. 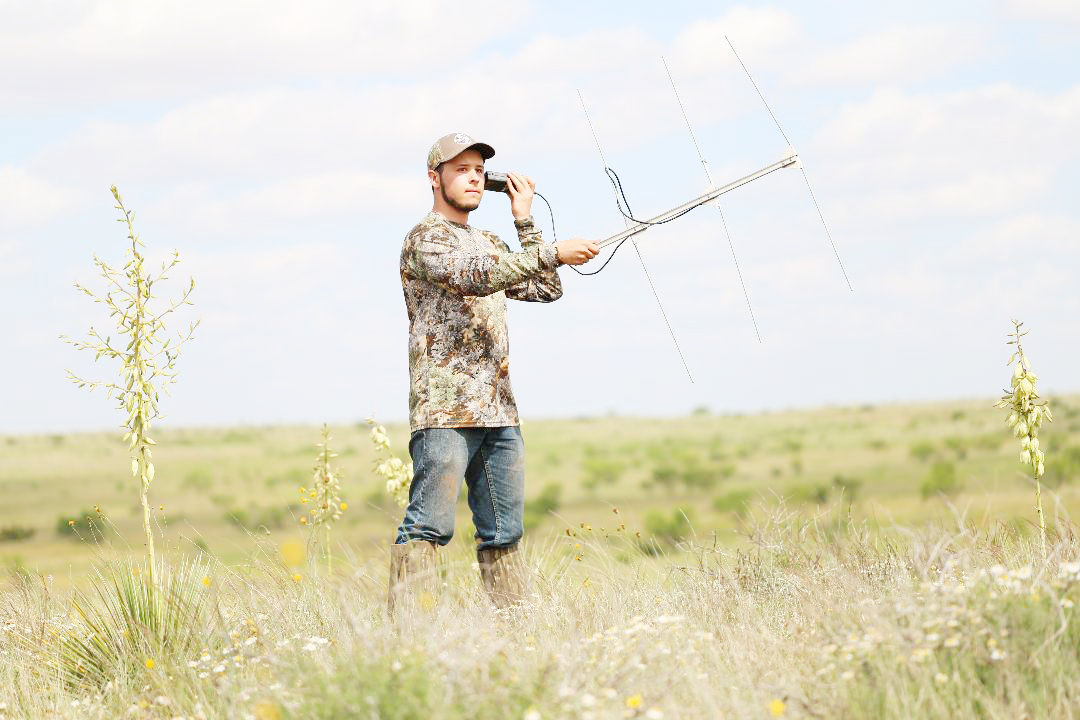 Rolling Plains Quail Research Foundation scientists carry out a variety of research projects at the organization’s 4,700-research ranch in Roby. The Fisher County property was established to provide a living laboratory to devise land management strategies for the benefit of wild quail. 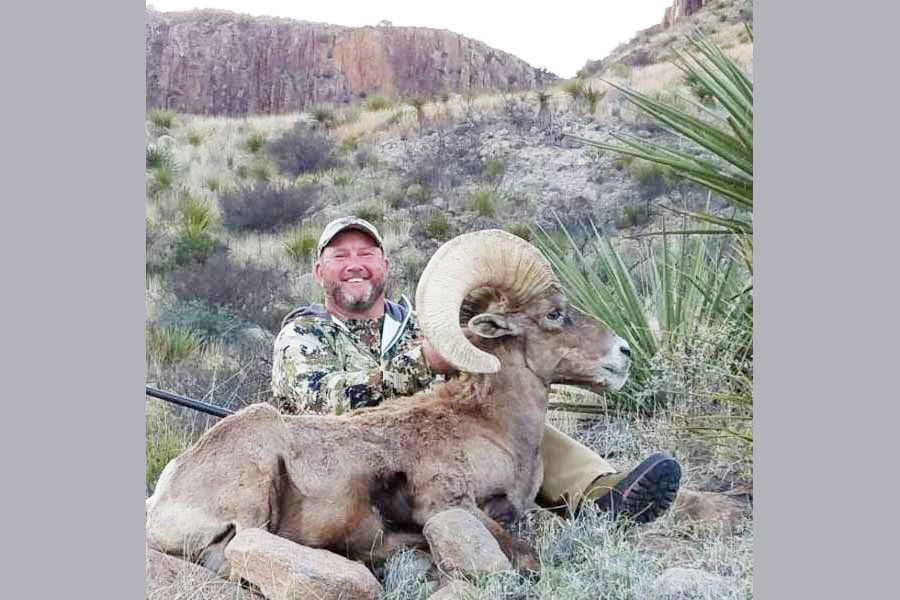 Grant monies passed out the Park Cities Quail Coalition continue to fund a number of quail research projects around the state. Here, a quail chick is fitted with a radio transmitter prior to release as part of a telemetry study conducted on the 6666 Ranch by the Quail-Tech Alliance.

Rolling Plains Quail Research Foundation scientists carry out a variety of research projects at the organization’s 4,700-research ranch in Roby. The Fisher County property was established to provide a living laboratory to devise land management strategies for the benefit of wild quail.

A tip of the hat and a double thumbs up goes out to the Park Cities Quail Coalition and all of its loyal followers.

The Dallas-based conservation group recently cracked open its kitty and handed out more than $1.75 million in grant money in support of more than a dozen conservation organizations and research initiatives centered on making a better life for Texas quail and military veterans, alike.

The fattest check went to the Rolling Plains Quail Research Foundation. The annual grant came with a ritzy jingle like none before it.

Totaling $1.042 million, it is the organization’s largest contribution in many years of giving to the RPQRF, a nonprofit outfit founded in 2006 for the sole purpose of understanding and managing bobwhite and scaled quail in West Texas.

The RPQRF bases from a 4,700-acre research ranch in Roby, where scientists like Dr. Dale Rollins have been working tirelessly for more than a decade towards multiple goals aimed at benefiting the iconic game birds and preserving Texas’ long-lived heritage of wild quail hunting for current and future generations.

Park Cities Quail Coalition is currently in its 13th year after cutting ties with now-defunct Quail Unlimited, Inc. The move led to the formation of nearly a dozen more Quail Coalition chapters across Texas, all of them run by dedicated volunteers who share a passion for the dapper little game birds known for their gentlemanly ways, speedy wing beats and signature trills.

Like other conservation organizations such as the National Wild Turkey Federation, Ducks Unlimited and Safari Club, Texas’ Quail Coalition chapters raise money through annual  fundraising events, banquets and auctions. Quail Coalition bylaws allow individual chapters to maintain full control of 100 percent of the money they raise. Better yet, chapters are allowed to distribute the funds however they want.

“The best thing is we’re not under the umbrella of a national organization,” he said. “Most of the money stays in Texas. Each one of our chapters raises a lot money, but Park Cities always seems to blow it away. They really cranked it up this year.”

Last March, PCQC’s 13th annual dinner and fundraiser drew a sell-out crowd of 1,100 sportsmen to the Frontiers of Flight Museum near downtown Dallas. Apparently, many of them were packing fat wallets and willing to spend to support a great cause.

The event set new attendance and fundraising records with net proceeds totaling more than $1.3 million. Stine said several auction items sold for upwards of $100,000, including a cruise in the Bahamas for four couples on-board an armada of private ships owned by Carl and Gigi Allen of Dallas. The trip sold for $400,000.

In looking back, Stine called it “conservation’s greatest night.”

And so did Morris. The American billionaire and outdoor retail icon from Springfield, MO., attended the banquet, where he was presented the T. Boone Pickens Lifetime Sportsman Award. The award is presented annually to a sportsman or woman distinguished by a life of adventure, who demonstrates love of the outdoors, respect for natural resources, and a spirit of generosity that makes it possible for future generations to enjoy the sporting life.

Morris rocked the house during his acceptance speech with an announcement that Bass Pro and Cabelas will pledge $100,000 annually over the next 10 years to the Park Cities QC chapter. He called Texas “a world-class leader not afraid to break out of the box to do what is right for conservation and a great example for other states to follow.”

Park Cites’ whopper contribution in support of the RPQRF serves as a rock-solid example to support Morris’ claim.

Stine said $735,000 of the $1.042 million is earmarked to fund annual operating expenses at the Fisher County research ranch, the construction of new a four-building research facility/educational conference center and to perform needed upgrades to the ranch clubhouse.

Additionally, a $107,000 grant will support intensive quail translocation research initiatives in Erath County. The remaining $200,000 will be used for implementing a new training program aimed at teaching veterans the ropes in wildlife and ranch management.

Justin Trail, president of the RPQRF’s board of directors, applauded the PCQC for their staunch support of quail research and for stepping up the game with such a generous contribution with conservation in mind.

“We are so grateful to Park Cities Quail Coalition for ensuring the future of the Rolling Plains Quail Research Ranch by making an investment in critical infrastructure, research initiatives and new programs,” Trail said. “We will steward these funds as wisely as we steward the land entrusted to us.”

As earlier mentioned, the RPQRF wasn’t the only organization on the receiving end of a plump sum in the wake of conservation’s greatest night.

Stine said the Quail-Tech Alliance received $205,000 for use in conducting predator management and supplemental feeding studies on several ranches in northwest Texas.

Another $100,000 was contributed to the Texas Tech Wildlife Toxicology Lab for use in the development of medicated feed to prevent eyeworms and cecal worms in wild quail, while veterans’ organizations like Heroes on the Water, Combat Marine Outdoors and Helicopters for Heroes divided $60,000 for use in the purchase of kayaks, fishing poles, vehicles and motorized wheelchairs for military veterans.

“We have a lot of hard working beneficiaries who have made the most of the funds we have granted them,” Stine said.

“This is our way of giving back and doing our utmost to insure we preserve our wild quail hunting heritage in this region.”

Meanwhile, the final deadline to apply for permits to be awarded in nearly two dozen categories in the Texas Parks and Wildlife Department’s 2019-20 drawn hunts program, and entering the Big Time Texas Hunts sweepstakes, falls on Oct. 15.