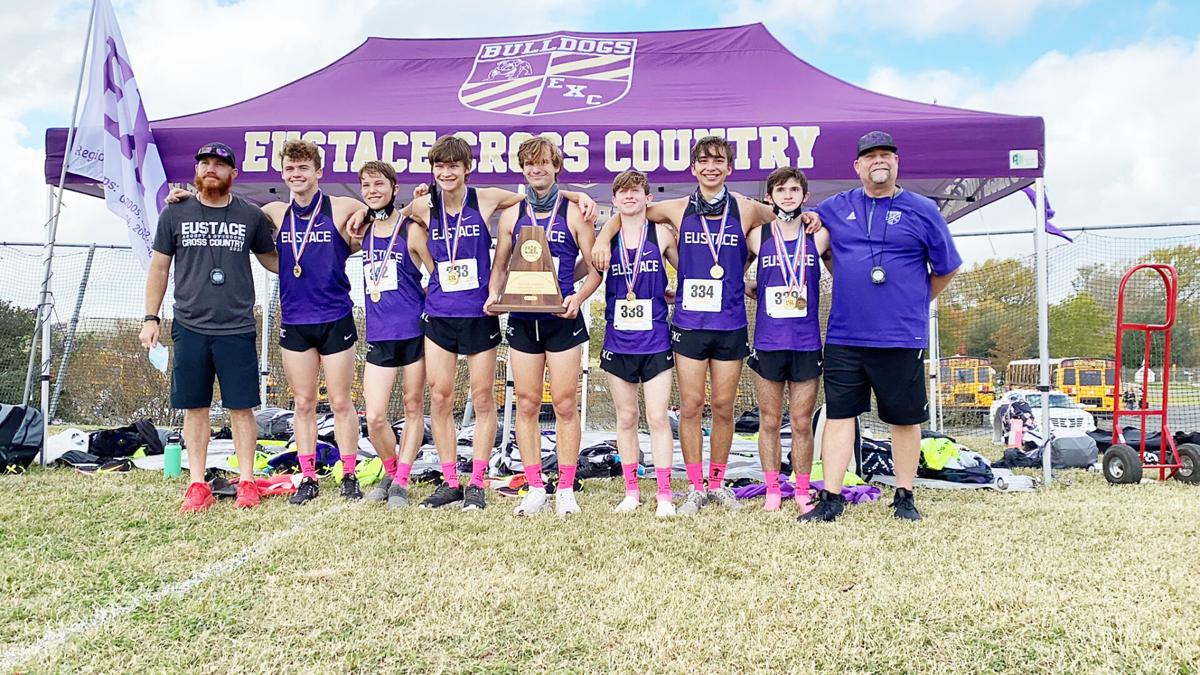 The Eustace Bulldogs cross country teams returns to the state meet Monday looking to defend their state title from last year. They will run at 12:30 p.m. at Old Settler's Park in Round Rock. 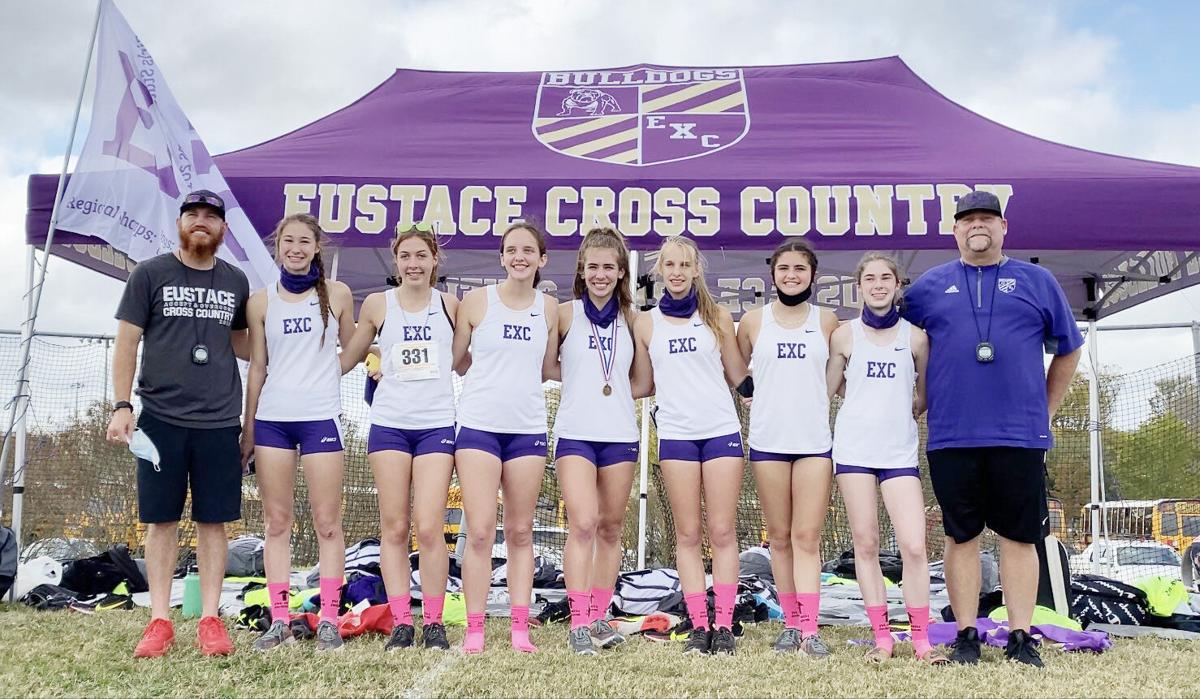 The Eustace Bulldogs cross country teams returns to the state meet Monday looking to defend their state title from last year. They will run at 12:30 p.m. at Old Settler's Park in Round Rock.

Head coach Josh Sypert said dealing with COVID-19 and getting to state has shown him how his team deals with the challenges this year.

“To be honest, it has been a roller coaster in 2020 for everybody,” Sypert said. “Especially for the athletes who are trying to find consistency because that is what we predicate our success on. Definitely with having the legacy that the teams in the past have laid that foundation of success on is really high and has helped these guys and girls to follow in their footsteps.”

The Bulldogs cross country team looks to defend their state title while two runners of the Lady Bulldogs team head to Old Settler’s Park in Round Rock Monday, Nov. 23. The Lady Bulldogs run at 11:45 a.m., while the Bulldogs look to repeat at 12:30 p.m.

In 2019, the Bulldogs won the state cross country meet as two of this year’s runners return to Old Settler’s Park. This will be the third state meet for Nathaniel Holland.

Sypert said having Trent and Nate back at state to help motivate the team was big this year.

“It is great to have some one that have been there, but it is almost like we have a brand new team,” Sypert said. “We had five graduate last year that were on that championship team. We did start over from scratch in a lot of ways, but to have Nate and Trent as the leaders to kind of show without having to use words there was never a moment where anyone skipped a beat.”

“Honestly after regionals, I am really excited about it,” Holland said. “At the start of the season, I was a little nervous about it since we had lost a lot of seniors and after winning district and regionals, I am excited. I am curious to see how it turns out with all of the new guys.”

Porte said he is hoping to tackle the race a little different in 2020.

“I am expecting to run a little smarter,” Porte said. “There is a guy that I am trying to stick on for the first two laps and pass him towards the end. I am hoping to go 16 or faster this year to improve on my time at least.”

“It is a little frightening. I think if we do what we are supposed to do, we can reel in another win,” Trenton Porte said. “It was a little different because we were missing some of the guys from last year, but I think we are all getting better mindsets and getting more prepared to run at a higher level than they have before.”

Holland said his message to the team is run your race.

I am going to tell them to run this just like any other race and do your best,” Holland said. “The biggest thing we are trying to do is run together. In practices, we are trying to get together and keep us all pulled together.”

If the Bulldogs are to defend their state championship from last year, Sypert said the gap must be tight and his team needs to be focused from the start of the 5K race. He said the gap needs to be under a minute.

“It will be very tight on the boys race,” Sypert said. “You never know until you run the race, but the teams in the past are looking super strong and this year our team looks strong but there are four other teams that look super strong. It will all come down to who competes the best on the day of the race.”

Trent said with the extra week away from campus, it has helped with his focus heading into Monday.

“I am going to focus on doing all of my practices correctly and getting my mind ready for state,” Trenton Porte said. “That is a good thing about getting time off because I don’t have to stress about school work or anything. I can get my mind right and practice and get everything set for state.”

This will be the first state cross country meet for junior Madisen Kulsa and sophomore Paige Row following a fifth place finish by the Lady Bulldogs at regionals. Kulsa was an all-region runner with a ninth place finish, while Row was 17th.

“We have qualified for state for the past I don’t even know how many years until last year,” Kulsa said. “I was on that team that didn’t qualify so it was really heartbreaking after putting in so much work. To be able to continue it this year has been my goal all season.”

Kulsa was a member of the state team her freshman year. She said she vaguely remembers the course in Round Rock.

Sypert said when it comes to having two qualifiers, he is happy they are getting to make the trip.

“It is great for the girls,” Sypert said. “I know both of them were not satisfied last year, and a lot of folks might talk about it. These girls didn’t talk about being upset and they did something about it. They deserve everything they have gotten this year because they have put in the work.”

Sypert said the girls race is stacked but he is hoping for a Top 20 finish and personal records for Kulsa and Row.

Row said she is shooting for a medal and taking the advice of Sypert heading into the week.

“He has told us to stay motivated, dedicated and try not to get nervous,” Row said. “He said if we do that is a good thing because that shows that we care. He wants us to know that when we are at the start line and the gun goes off, all of those butterflies will go away and we can run our best race.”

Row said she will make sure that her and Kulsa remained focused on what happens when they reach the starting line on Monday.

“I am super excited. I really wanted to go last year and I got really close,” she said. “I was so sad that I didn’t make it last year. Since I made it this year, it was an extra motivator to really push myself and was really happy that I made it this year.”

Kulsa said having Row go with her will help push her during the biggest race of her career.

“It is pretty easy for me because I am super passionate about my running,” Kulsa said. “It is something that I do to myself is my focus is there since I didn’t qualify last year. I am set on doing my best because I know it is not guaranteed anymore. It is amazing because she has been pushing me all season. She has been the one helping me to get better so I wouldn’t want anyone else going with me.”