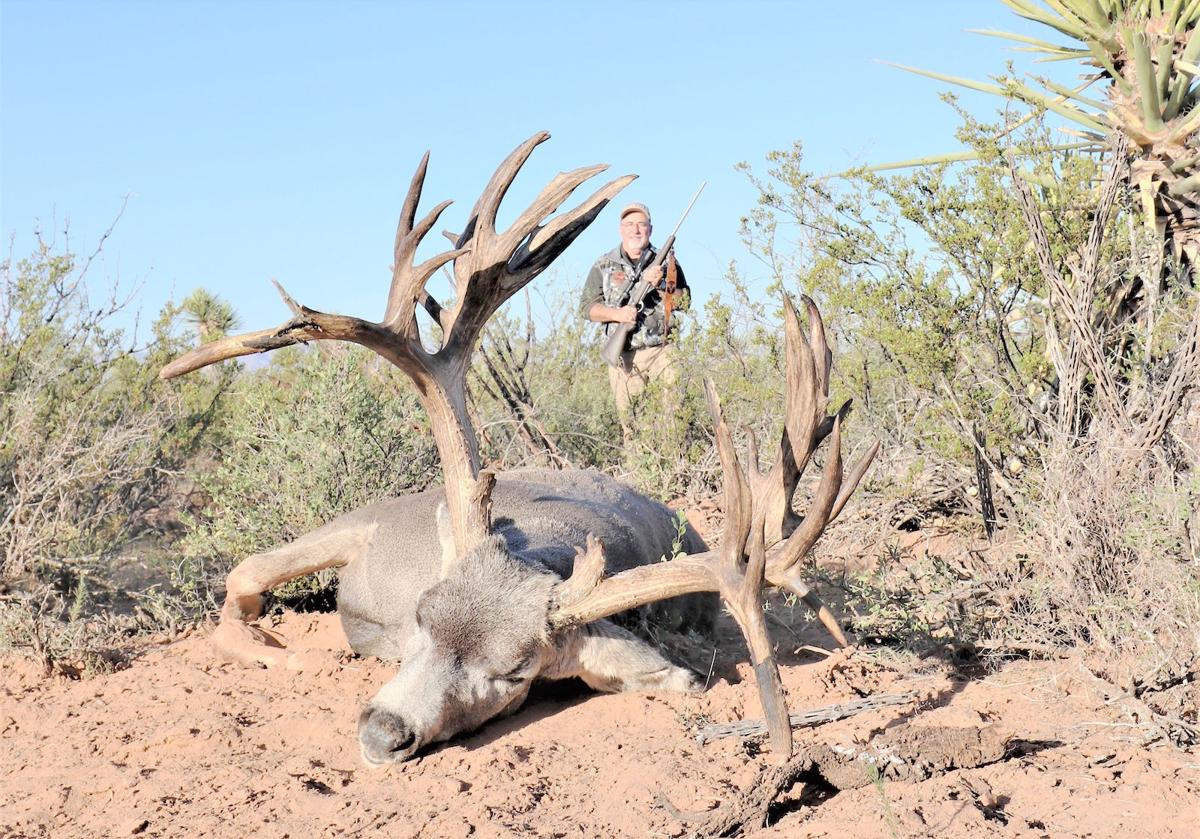 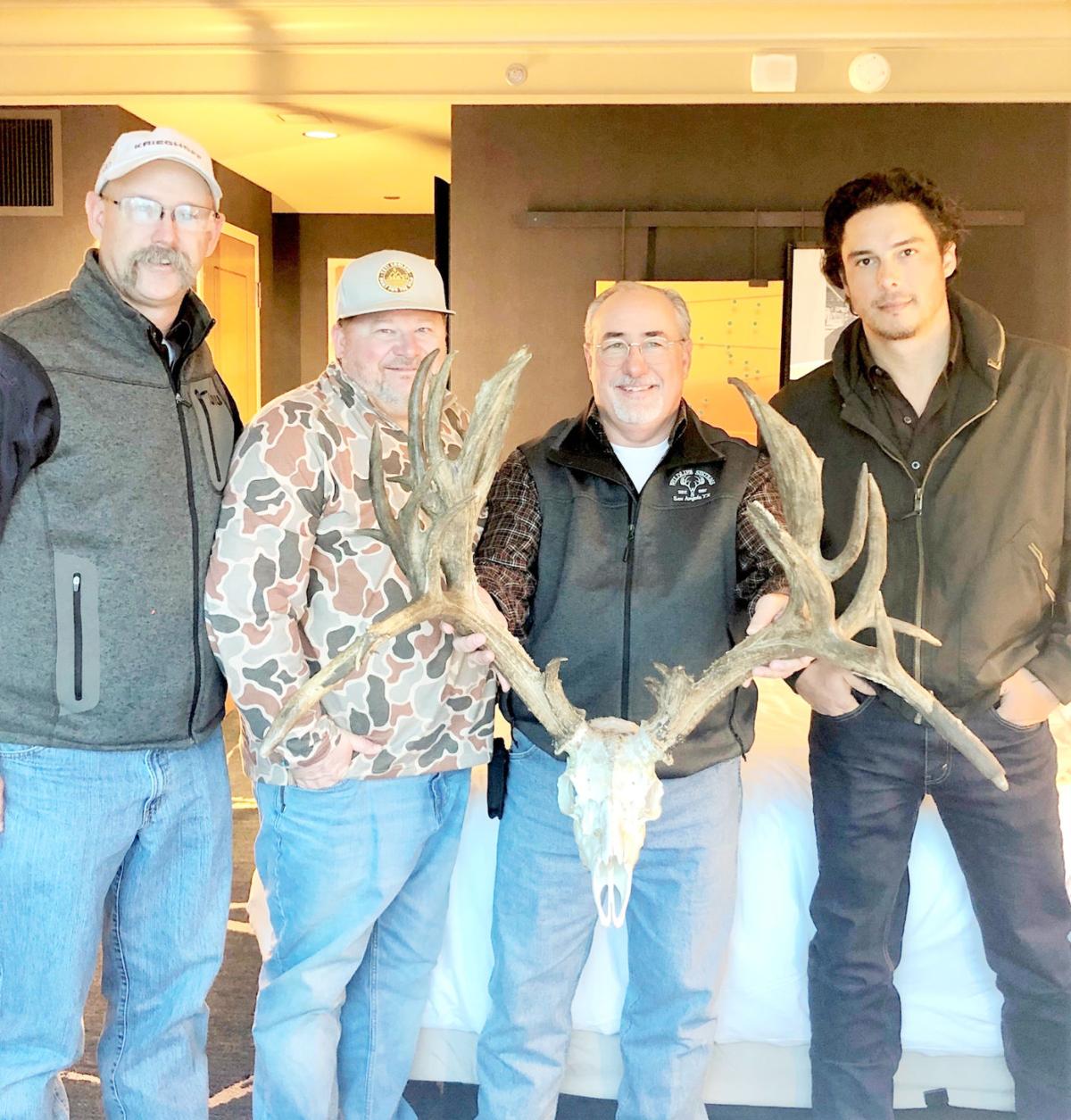 Simons' buck was scored by a three-man panel of certified Boone and Crockett scorers at the Omni Hotel in downtown Dallas. Among the scorers were (left to right) Alan Cain, David Brimager and Craig Bowen (far right). 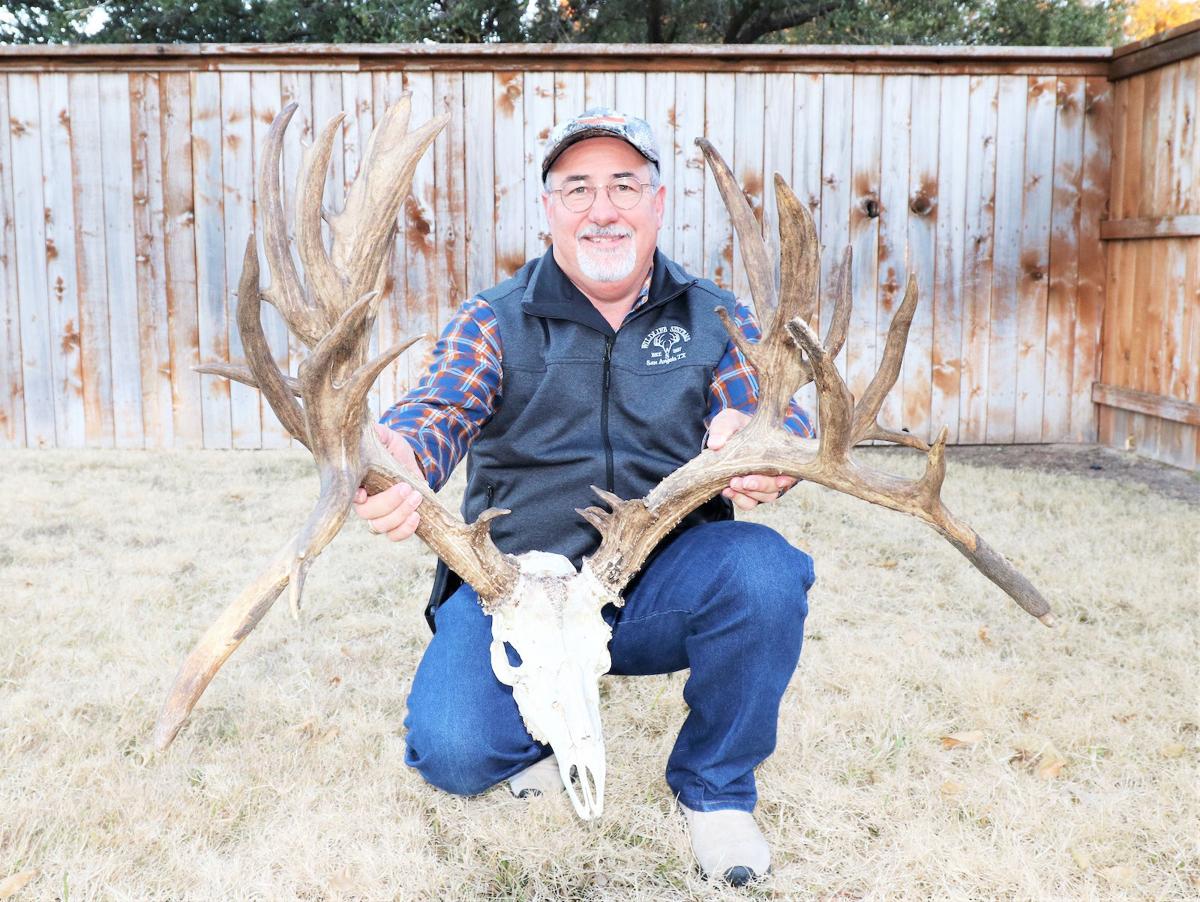 The big mule deer Simons nicknamed “Hank” grew a magnificent set of antlers with massive main beams that turn out and down, almost like drop tines. The new state record buck has 17 abnormal points totaling 91 3/8 inches and 42 1/8 inches in mass measurements.

Simons' buck was scored by a three-man panel of certified Boone and Crockett scorers at the Omni Hotel in downtown Dallas. Among the scorers were (left to right) Alan Cain, David Brimager and Craig Bowen (far right).

The big mule deer Simons nicknamed “Hank” grew a magnificent set of antlers with massive main beams that turn out and down, almost like drop tines. The new state record buck has 17 abnormal points totaling 91 3/8 inches and 42 1/8 inches in mass measurements.

The tale of the tape is official on an enormous Texas desert mule deer shot last fall by Greg Simons of San Angelo. Not surprisingly, the final Boone and Crockett score on the free ranging Culberson County buck is quite high.

High enough, in fact, to raise the bar and set a new standard by which monster Texas mulies will be judged until somebody gets really lucky and kills a bigger one. My guess is it will be a while before “Hank” loses any of his thunder.

Hank is the good ol’ boy moniker Simons and his hunting buddies pinned on the old buck at a young age. Simons saw the deer for the first time in 2016, roughly three years after he and some friends leased a sprawling 40,000-acre low fence ranch near Van Horn for hunting.

The brief encounter with the native West Texas buck made an everlasting impression. A veteran hunter and wildlife biologist, Simons could tell by looking that Hank packed the potential to become something really special in time. And the buck didn’t disappoint.

On Jan. 11, Hank was officially declared as the biggest open range mule deer taken by a hunter statewide since the Texas Big Game Awards program began maintaining a registry of Texas big game harvests in 1991.

TBGA is a hunter/landowner recognition program run jointly by the Texas Parks and Wildlife Department and Texas Wildlife Association. Its main purpose is to recognize outstanding big game animals and shine a light on land managers and wildlife management programs that help them reach their potential.

Mule deer and other critters that live life in the harsh, Trans-Pecos environment need all the love they can get. Culberson County averages only about 12 inches of rain per year.

Simons and his friends have spent a wealth of time and money over the last seven years pampering the native mule deer herd that lives on the big ranch formerly used for raising cattle.

Three certified B&C scorers settled on those numbers after spending 80 minutes measuring bone and pondering judgement calls on a bizarre rack in what might seem like a peculiar setting for doing such a thing.

The recent scoring session went down in Room 1055 of the Omni Hotel in downtown Dallas, roughly 500 miles east of the unforgiving Chihuahuan Desert where Simons shot the huge buck more than two months earlier. The luxury hotel connects via sky-bridge to the Dallas Convention Center, site of the Dallas Safari Club’s 2020 Convention and Sporting Expo held Jan. 7-10.

The B&C panel of scorers included Alan Cain of Pleasanton, David Brimager of San Antonio and Craig Bowen of Bertram. The men were in town for the DSC gathering, a significant fundraising event that draws tens of thousands of sportsmen under one roof in a massive celebration of hunting and conservation.

“A bed mattress in the Omni might seem like sort of an unorthodox place for three Boone and Crockett scorers to measure a big buck,” Simons said. “Everybody agreed it would be better to do it in a private setting rather than in a busy hallway or in an exhibitor’s booth with a bunch of people looking over their shoulders. It was probably a first for the Omni.”

B&C scores on antlers are tallied using a special tape or cable to record a series of circumference, length and spread measurements on the beams and tines. The measurements are rounded off to the nearest 1/8 inch.

Net scores on non-typical deer take into account deductions for a lack of typical symmetry between the two antlers. All B&C record book entries must be allowed to dry at room temperature for at least 60 days to allow for shrinkage. TBGA also follows the 60-day drying rule on top tier bucks.

Simons, who stalked within 50 yards of the giant deer on the afternoon of Nov. 4, said is seems a little surreal knowing the state record is officially his.

“I’m still trying to reconcile in my mind the gravity of what it means,” he said. “I’m certainly thankful to have had an opportunity to hunting a property where such an extraordinary animal lived and very lucky that things came together that allowed me to take this animal.”

The system relies on 3D scanning devices and high-tech computer software to digitally measure antlers, horns and skulls before spitting out a final score and imagery that can be used for producing a cast to replicate trophy class animals. Simons plans to have several replicas of his antlers made from the cast.

The technology, now being used to score deer for the Los Cazadores Big Buck Contest in South Texas, appears to be amazingly accurate. Simons’ Trophy Scan score is 292 — a mere 1/8 less than the official tally.

It takes a magnificent set of antlers to rack up such tall numbers, and Simons’ buck is a dandy in every respect. The headgear also rings the bell for eye appeal. In fact, it may be the coolest looking set of Texas mule deer antlers ever brought to the scoring table.

The buck’s inside spread spans 32 6/8 inches, but was only given credit for 27 4/8 inches because of a B&C ruling that the inside spread credit cannot exceed the longest main beam. The rule essentially robs the deer of 5 1/8 inches on inside spread that would have bumped the gross score to 300 5/8 and the net to 297 2/8.

Cain says Hank is equally impressive when scored as a typical. The buck nets 200 6/8 as a 10 pointer. That’s 4 1/8 inches larger than the current TBGA all-time typical record shot in Potter County during the 1996-97 season by Mickey Van Huss. Cain, TPWD’s white-tailed deer program leader, called it a privilege to be part of the scoring panel assembled to evaluate Texas’ newest boss mulie.

“It is truly an amazing buck,” Cain said. “Some non-typicals can be pretty difficult to score. This one wasn’t extremely difficult, but it wasn’t easy, either. It’s got some webbing on one side and some of the abnormal points took some time to figure out.”

Brimager is a certified wildlife biologist and director of public relations for the TWA. He said Simons’ buck is a testament to the benefits of sound deer management practices and solid proof that it is possible for native mule deer to become giants on Texas soil if folks will give them some love.

“Being a truly native Texas mule deer, I was honored help score it,” Brimager said. “It’s just an incredible animal — a Texas record that should last for a while.”