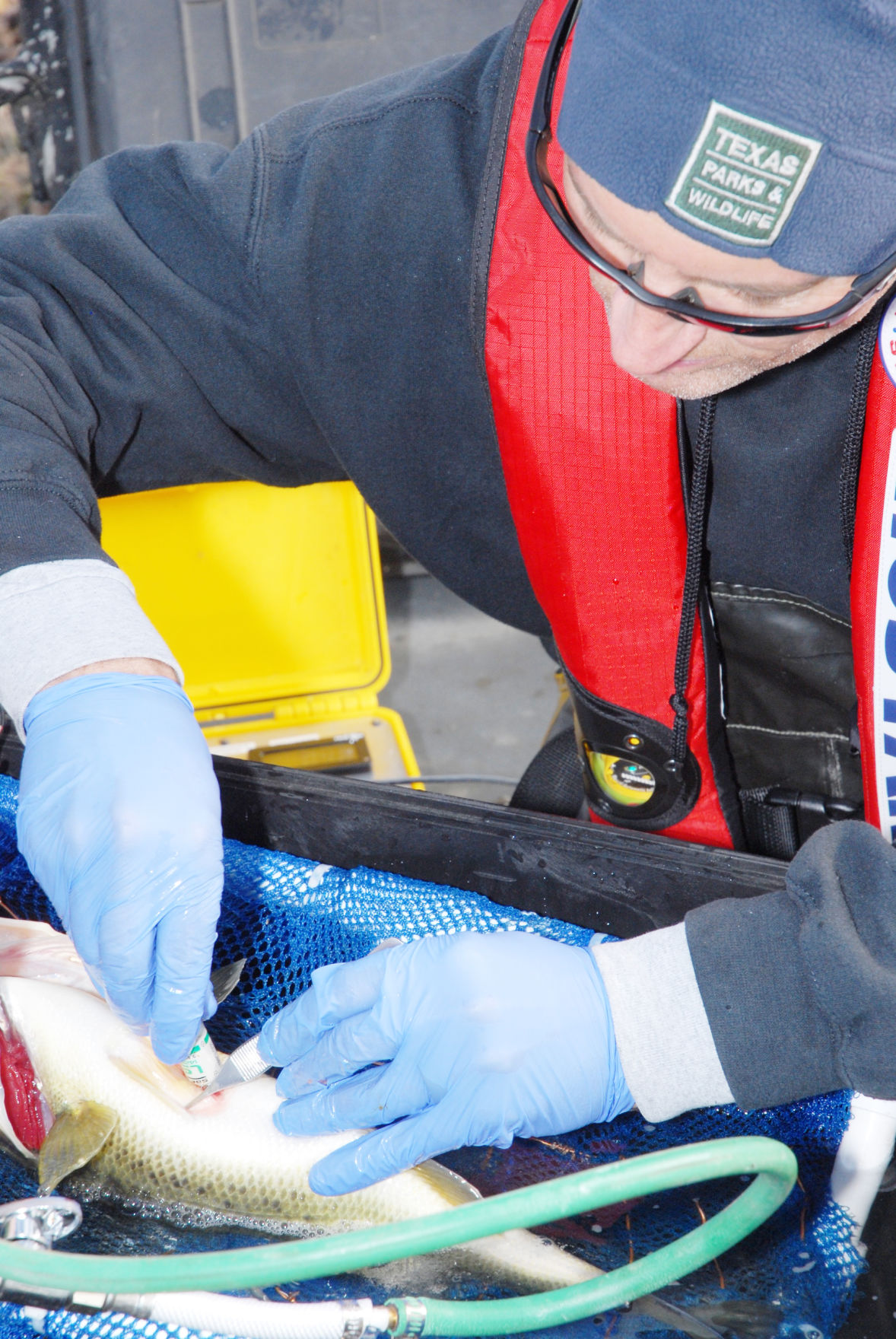 A TPWD bass tracking study launched on Toledo Bend in November underwent a setback when all of the research fish — 26 total — died of external fungal infections within two weeks of being surgically implanted with electronic transmitters. TPWD fisheries biologist Todd Driscoll (pictured here) suspects the mortalities may be the result escalated stress levels and weakened immune systems in cold water.  Research efforts are currently underway at the John D. Parker Fish Hatchery in Brookeland to find out before the research continues on T-Bend and Lake Fork. 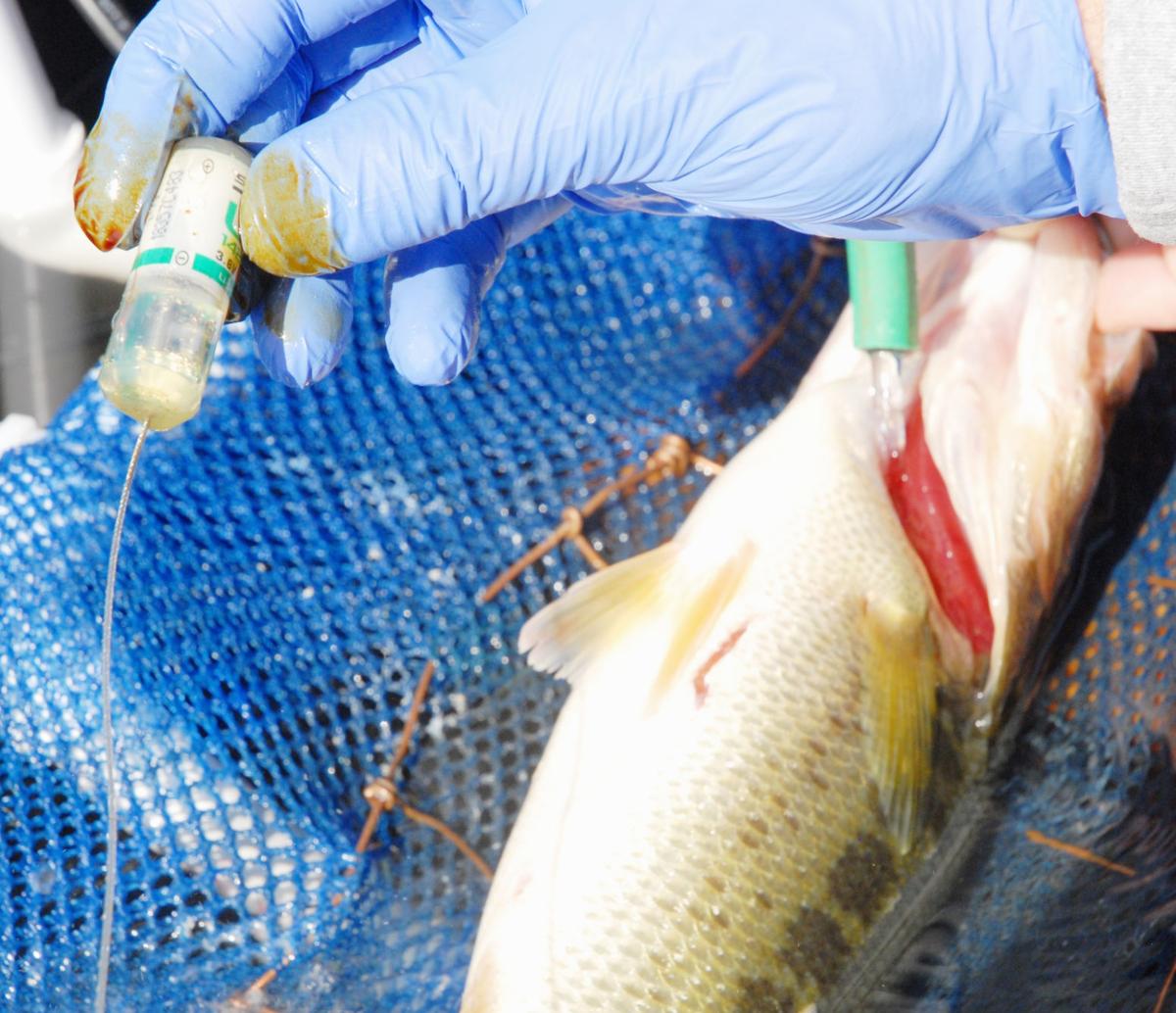 The 1 1/2-inch long transmitters cost $175 each. Biologists have managed to recover eight of the units from the lake’s shoreline thus far. One transmitter is in a bald eagle nest and another 12 are at the bottom of the lake awaiting retrieval by scuba divers. 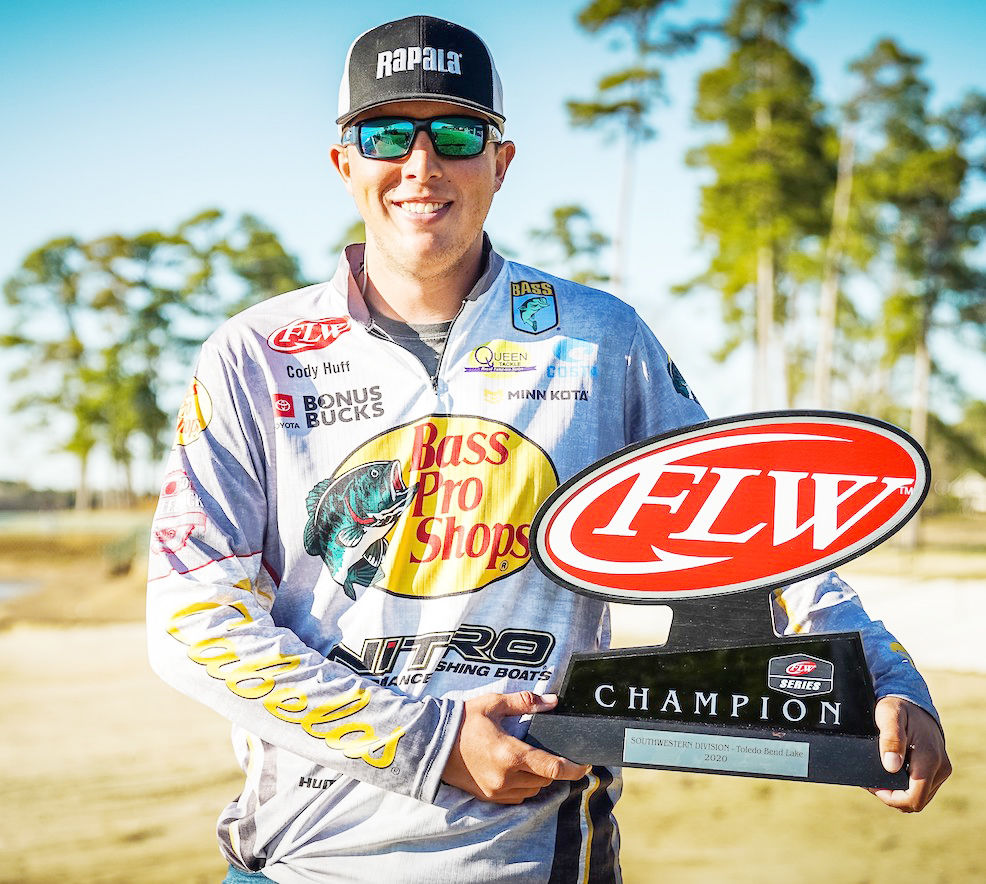 A TPWD bass tracking study launched on Toledo Bend in November underwent a setback when all of the research fish — 26 total — died of external fungal infections within two weeks of being surgically implanted with electronic transmitters. TPWD fisheries biologist Todd Driscoll (pictured here) suspects the mortalities may be the result escalated stress levels and weakened immune systems in cold water.  Research efforts are currently underway at the John D. Parker Fish Hatchery in Brookeland to find out before the research continues on T-Bend and Lake Fork.

The 1 1/2-inch long transmitters cost $175 each. Biologists have managed to recover eight of the units from the lake’s shoreline thus far. One transmitter is in a bald eagle nest and another 12 are at the bottom of the lake awaiting retrieval by scuba divers.

A largemouth bass tracking study launched last November on Toledo Bend Reservoir by Texas Parks Wildlife Department inland fisheries biologists has hit a bump in the road that has scientists looking for ways to get their research back on course.

The two-year radio telemetry study was put in motion to learn more about how the popular sport fish react to fishing pressure and position in the water during varied conditions and changing seasons. Angler concerns over  increasingly tough fishing witnessed on the Texas/Louisiana border lake in recent times helped spur the notion to move forward with the study.

Scientists say the project took an unexpected turn in the wrong direction when the first batch of study fish — 26 in all — died within about two weeks after the research got underway.

The 2-5 pound study bass were collected from 62-degree water in the Housen Bay area of the lake using the same electrofishing equipment fisheries managers rely on for conducting routine population surveys. Electrofishing temporarily stuns the fish and they float to the surface so they can be netted and individually evaluated.

Each study fish was carefully fitted with a small transmitter that required a small incision in the body cavity to implant the electronic device. The wounds were closed using sterile surgical threads and the fish were subsequently released in close proximity to where they were collected.

Researchers say the surgical process isn’t anything new in the fisheries science community. Biologists in other parts of country have installed transmitters in bass and other sport fish for other research studies with good success.

This is the first TPWD bass study of its kind, but it is not the first time someone has tracked beeping bass in Texas lakes. Former Houston County Lake fishing guide John Hope performed similar research on dozens of trophy class fish from 1986-94.

Hope surgically implanted transmitters in 57 female bass ranging 6-15 pounds on 15 different lakes. Hope claims he never had a fish die in eight years of tracking them. He says he never implanted a transmitter earlier in the year than March.

What went awry with the Toledo Bend study fish? That’s a mystery TPWD fisheries biologists Todd Driscoll and Jake Norman are trying to figure out.

Driscoll is heading up the research at T-Bend. The biologist originally hoped to have 50 bass implanted with the $175 transmitters by the end of spring, and to be tracking the fish every two weeks.

Instead, he and his staff have spent the last month trying to recover what transmitters they can.

The battery-operated transmitters are about 1 1/2 inches long. Each one has a unique frequency and delivers a strong beeping signal that can be detected from a mile away using a special antenna.

Driscoll says eight of the 26 devices are accounted for thus far. Most were found in the woods or along the lake’s shore, where the dead fish were apparently eaten by scavengers.

Twelve other transmitters have been pinpointed on the lake’s bottom and will be retrieved using scuba gear later this spring. Another transmitter is pinging a signal from a bald eagle nest high in a lakeside pine tree.

Driscoll said the five remaining transmitters are believed to be on land, but can’t be pinpointed due a reduction in signal strength in the dense brush.

Norman rides shotgun over Lake Fork, where like concerns over tough fishing have warranted a similar tracking study. The Fork study, which was set to begin last December, was put on hold after Norman learned about the Toledo Bend mortalities.

Before Christmas, Norman used the identical surgical process to implant  transmitters in five Lake Athens bass. The fish were released in hatchery raceways at the Texas Freshwater Fisheries Center for observation.

Those bass died within a month. "All of the fish had fungal infections that originated at the incisions and spread over their bodies," Norman said.

Using varied surgical procedures, Driscoll implanted transmitters in a dozen keeper-size fish from Sam Rayburn and placed them in hatchery raceways at the John D. Parker Fish Hatchery for observation.

He said seven of the 12 bass perished with fungal infections within 11 days. Interestingly, the remaining five fish appear healthy more than a month later.

“It’s been frustrating and confusing to say the least,” Driscoll said. “We feel certain it’s not our surgical procedure, water intrusion or the foreign body of the transmitters that are causing the problem, though.”

Instead, the biologist thinks the mortalities may be related to elevated stress levels caused by performing surgery when water temperatures are cold or on a downward swing as they were in late fall.

Driscoll says there is no previous research to indicate there is a bad time to implant transmitters in bass. However, it appears that doing so when water temperatures are chilly and unstable may not be a good idea, possibly because the bass’ immune systems are weaker than in warmer, more stable conditions.

He added that hatchery managers have witnessed escalated levels of mortality when handling hatchery pond fish in water temperatures near 60 degrees, but he was unaware of those findings before the tracking study got underway.

“Cold weather handling stress related mortalities of bass is totally undocumented in scientific literature, but our hatchery people have seen it,” Driscoll said. “On one hand it doesn’t make any sense, because tournament-related mortality studies indicate the colder the water the better when it comes to stress. On the other hand, it appears that the actual incision is pushing the stress over the top and that the bass’ immune systems are lowered to the point that they can become susceptible to a fungus that can still proliferate with colder temperatures.”

On Feb. 4, Driscoll implanted transmitters in five more control bass. Those  fish had spent about 2 1/2 weeks acclimating to 75-degree water in hatchery raceways.

How those fish fare in coming days shed some light on where the tracking study goes from here, he said.

“Those fish should give us some good insight as to whether or not the problems are water temperature related,” Driscoll said. “We don’t know that’s what it is, but that’s what all the signs are pointing to. We’re going to see how our control studies play out before we do anything else on Toledo Bend or Lake Fork.”

Cody Huff seems to have found his groove on Toledo Bend.

The first came in the Bassmaster College Series event held on Jan. 23-25. Huff and his team partner, Dakota Pierce, also from Ava,  went wire-to-wire and walked away with the winner’s trophy after catching a three-day total of 60 pounds, 7 ounces. They earned their college club $3,000.

The second came a week later when Huff notched his first pro level win with a convincing performance in the FLW Toyota Series Southwestern Division season opener on Jan. 30 - Feb. 1 with a three-day total of 61-11. Huff took home $35,395 for the title.

The college senior beat out a bunch really big sticks to win the dough, many with decade’s more experience on the 185,000-acre reservoir. Even more impressive the fact that he used a bait that’s old as the hills to do it.

Huff caught all of his fish using a 7/8 ounce  jigging spoon with hammered silver sides. It’s basically a shiny chunk of lead with single treble hook that does a great job of imitating shad.

There are a variety of ways to fish a spoon, but Huff chose to fish it vertical around pods of shad he found at suspended depths using high tech electronics. It was a monotonous program calling for patience and precise presentations that Huff carried out to a tee en route to earning the respect of many seasoned pros more than twice his age.

“He’s good….real good…. scary good,” said Toledo Bend fishing guide and tournament pro Stephen Johnston of Hemphill. “He’s a like a cross between Kevin VanDam and Brent Ehrler. He’s definitely going to be a guy to watch in the future.”

It’s a good time for the young angler to be riding a hot streak. He’s set to compete in the biggest event of his life next month in the 2020 Bassmaster Classic on March 6-8 on Lake Guntersville in Alabama. He earned that ticket as the 2019 Bassmaster Carhartt College Series bracket champion.

Huff was the only angler from outside Texas and Louisiana to make the Top 10 in the tournament. Rounding out the Top 10 were David Curtis of Trinity, Matthew Boyt of Converse, La., Stephen Johnston of Hemphill, Justin O’Brian Cooper of Zwolle, La., Chris Lewis of Longview, Darold Gleason of Many, La., Benjamin Gulett of Converse, La., Cody Pitt of Many, La., and Phil Marks of Dallas.