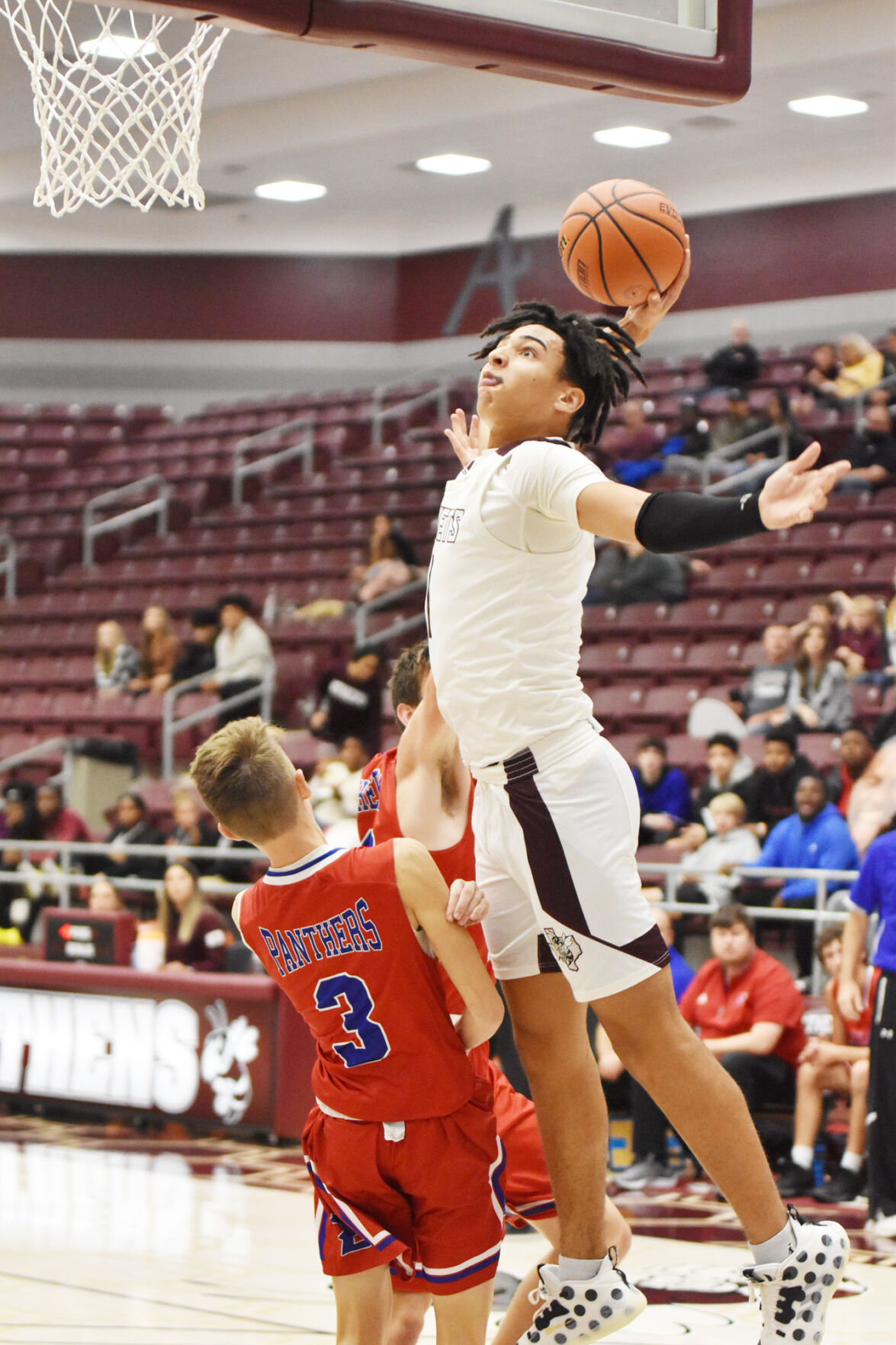 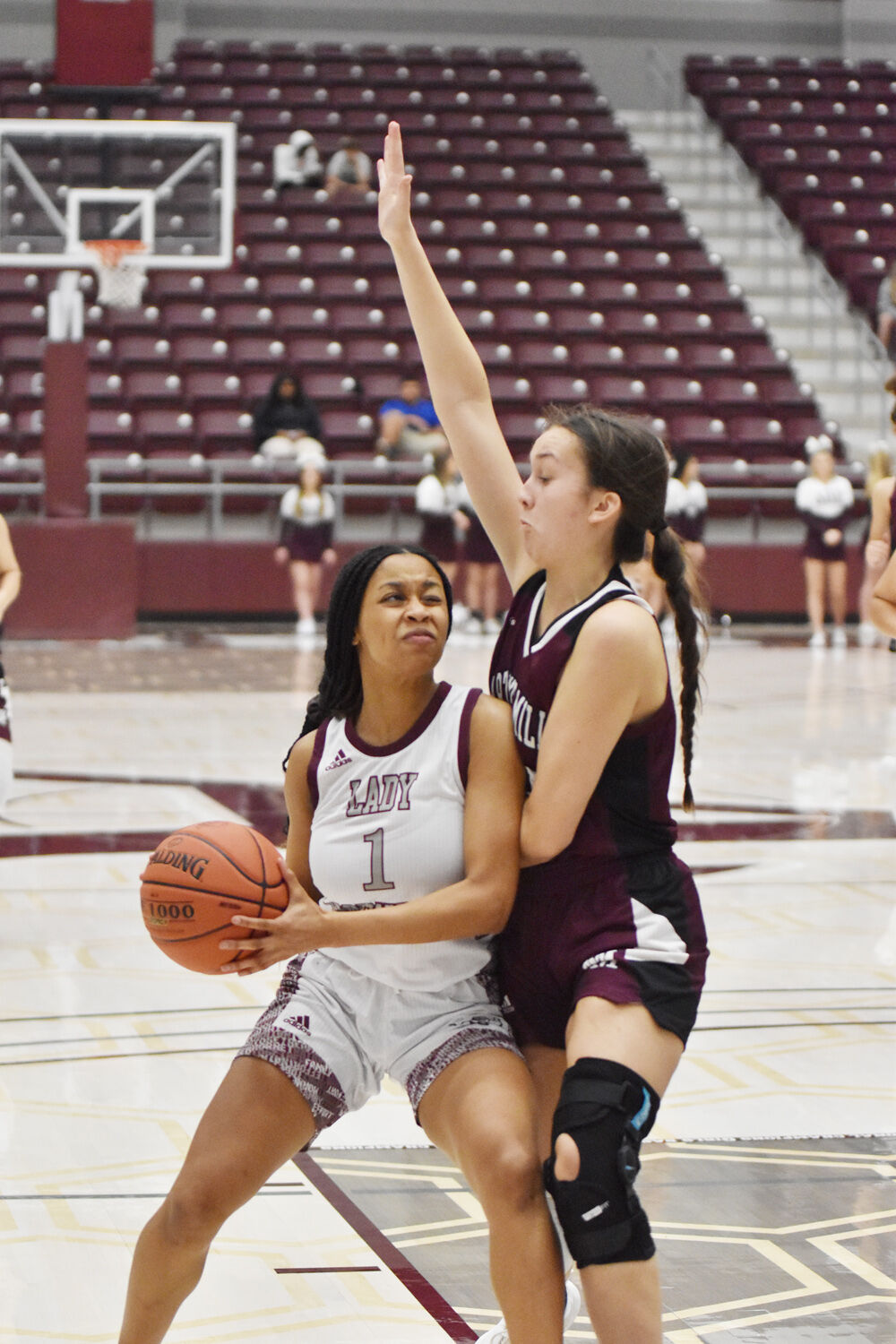 Athens senior NaTori Williams (1) tries to find a shot against a Martin’s Mill Lady Mustangs defender in a 63-20 loss Friday in the second game for Athens in the 3rd Annual Athens Invitational Basketball Tournament.

Athens senior NaTori Williams (1) tries to find a shot against a Martin’s Mill Lady Mustangs defender in a 63-20 loss Friday in the second game for Athens in the 3rd Annual Athens Invitational Basketball Tournament.

The first day of the 3rd Annual Athens Invitational sponsored by Athens Screen Printing saw the Athens Hornets and Lady Hornets finish at 1-2.

On the girls side, the Lady Hornets beat Ennis 54-52 in overtime and lost to No. 4-ranked Martin’s Mill Lady Mustangs 63-20 in the nightcap. On the boys side, the Hornets lost to Bullard 52-39. On Friday, the Lady Hornets played LaPoynor and Texas City in pool play action.

The Hornets faced Eustace in pool play on Friday before heading to the Championship bracket for the final game of Day 2 action.

In the final game of opening day action, the Lady Mustangs dominated from the opening tip taking a 20-6 lead into the second quarter.

They extended the lead to 42-10 at the half led by junior Mattie Burns with 11 and sophomore Kate Lindsey with 10. Lindsey finished the game with a game-high 15 points for the Lady Mustangs. MARTIN’S MILL (63) — Kylee Lookabaugh 8, Kate Lindsey 10, Ruthie Mein 8, Mattie Burns 15, Libby Rogers 2, Jada Celsur 7, Halle Hawes 5, Bailey Venazuela 4, Team 4.

In a very physical first half between the two teams, Athens held a 24-21 lead at the break.

The two teams never held more than a six point lead in the first 16 minutes as Bullard’s Hayden Medley gave them a 12-6 lead with just over two minutes remaining.

In the second half, Bullard went on a 10-0 run to break a 27-27 tie in a four minute stretch. The Hornets broke the drought with 35 seconds remaining in the third as Seth Red found Xiaver Hemphill for the bucket.

Athens was able to get to within seven at 40-33 on a rebound basket by junior Jaden Crane early in the fourth. That would be the closest it would get for the final six minutes of the game.

Athens was led by Jermarius Moore with 11 points. Crane had nine, Jorien Ray had seven, Eli Rincon had five while Gage Friedrich had three. Hemphill and Colton Harrod finished with two points.

Bullard was led by Jeffery Brooks with a game-high 22 points, Owen Thompson with 15 points, Garrett Nuckolls with 13 and Hayden Medley with two points.