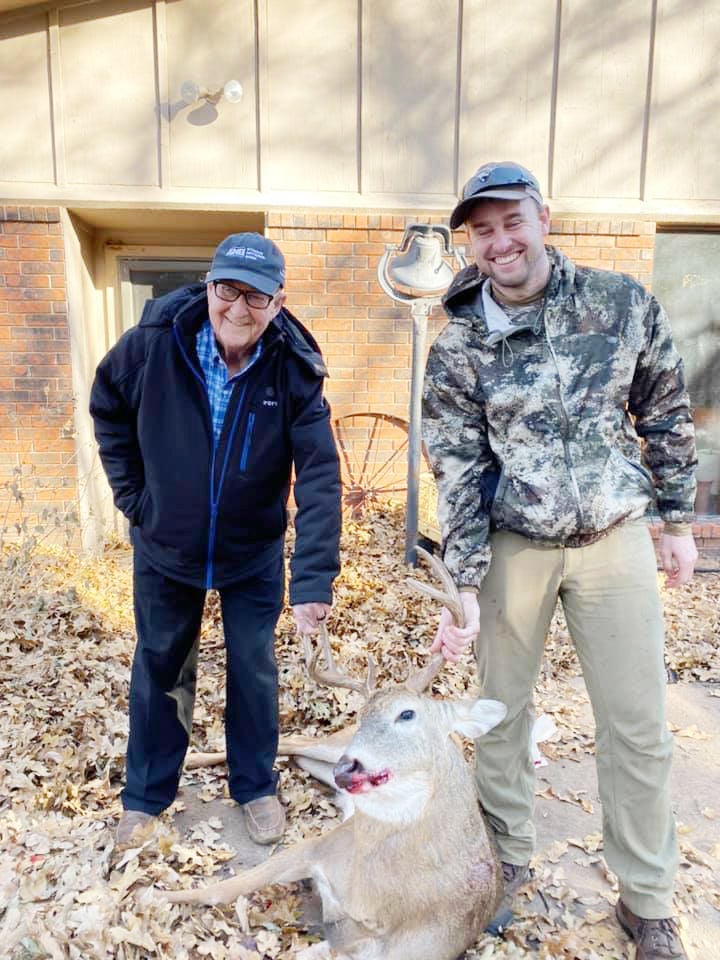 John Sasser of Corpus Christi (right) and his grandfather with the Oklahoma 8 pointer that crashed through their living room window on Thanksgiving eve. 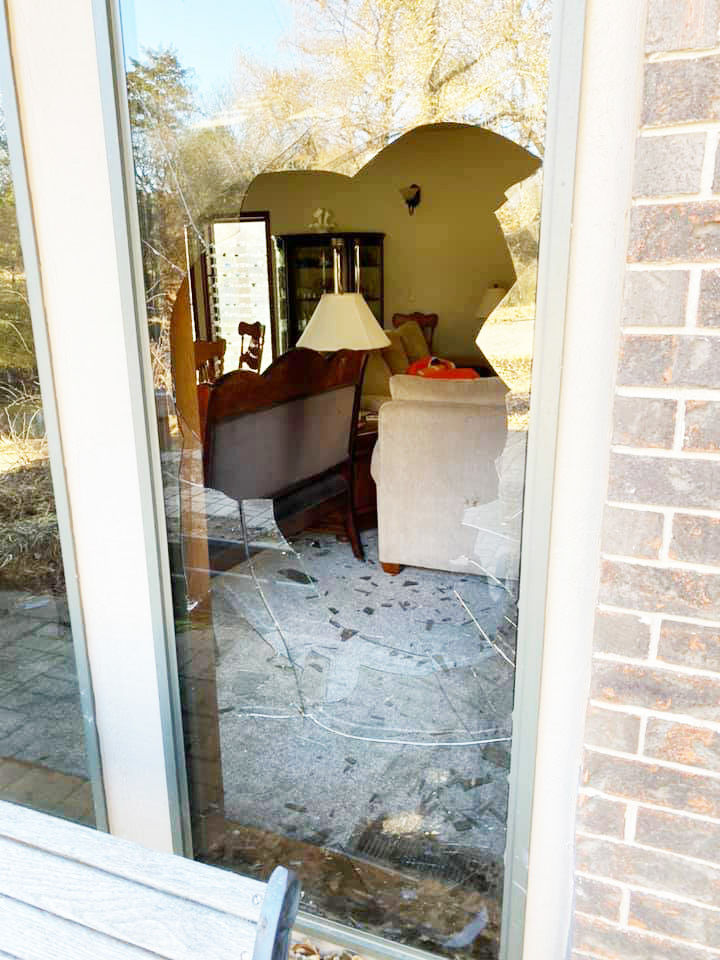 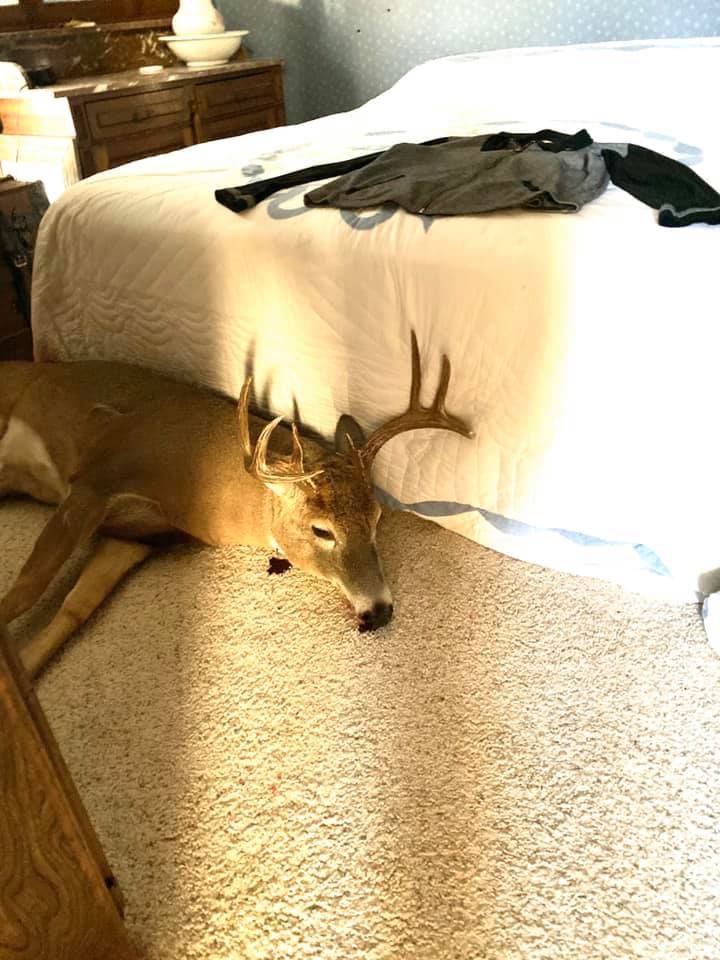 Sasser shot the buck after it retreated to a guest bedroom of his grandparents' home.

John Sasser of Corpus Christi (right) and his grandfather with the Oklahoma 8 pointer that crashed through their living room window on Thanksgiving eve.

Sasser shot the buck after it retreated to a guest bedroom of his grandparents' home.

Often times, he'll show up when you least expect it, eyes glazed in a stupefying fit of passion that cannot be controlled. Simply put, a buck in rut is predictably unpredictable.

There certainly hasn’t been a shortage of surprises during the 2019-20 hunting season. Of all the stories to surface, John Sasser of Corpus Christi wins the prize for the most bizarre encounter with a rut-crazed whitetail.

Sasser, 24, was hunting at his grandparent’s 200-acre farm near Perkins, Okla., over the Thanksgiving holidays. He shot a nice buck one morning and brought it back to his grandfather’s barn to dress it.

Once the dirty work was done Sasser headed out in his pick-up to dispose of the remains. His white lab, “Bo,” went along for the ride in the bed of the truck.

On the return trip, a doe busted out of an adjacent woodline with an 8-point buck trailing tight on its heels. The dog spotted the two deer and jumped out of the truck in the heat of the excitement.

Sasser said the doe crossed the road and took off across a pasture. The buck, meanwhile, peeled off and headed up the driveway in the direction of his grandparent’s home. Bo was in hot pursuit.

Sasser’s grandparents, both in their 70s, weren’t home at the time. His dad, Robert, was in the backyard tending to chores.

The hunter contacted his dad by cell phone and told him the buck and the dog were headed towards the house.

“When I got there my dad said he hadn’t seen the buck or the dog,” Sasser said. “I thought that was sort of weird so I decided to look around.”

Sasser said he was walking the perimeter of the house when he heard a strange thumping noise coming from inside.

“At first I thought my dog was hung up or something,” he said. “I realized what had happened once I got around to the front of the house. One of the big windows in the living room was busted out and everything was wrecked. When I told my dad the buck was in the house he looked at me like I was crazy.”

The two men saw the buck in the living room, but only briefly. Sasser said the deer leaped the couch where his grandmother usually sits and headed down a hallway into a guest bedroom.  They opened the doors to the house hoping the deer might make a run for it, but it wouldn’t budge after 15 minutes of waiting.

Sasser said his grandfather showed up in short order to assess the situation. After seeing the damage the deer had already done to the home’s interior, the elder Sasser thought it would be best to dispose of the buck quickly rather than risk any more damage that might occur if they, or anyone else, attempted to force the animal out.

“My grandmother has three china cabinets full of Depression-era glass in the house,” Sasser said. “You can’t put a value on that stuff. That’s what we were really concerned about.”

Sasser was only one with a rifle handy, so he was elected to deal with the dilemma. Luckily, he was able to complete the job without an issue.

“I really didn’t know what to expect when I went in there,” he said. “I slipped in the door, raised up over the couch and was able to see the deer in the bedroom. Unfortunately, the only rifle I had with me at the time was a 7mm Mag. Shooting that thing in the house sounded like a cannon going off. It was pretty rough.”

Sasser says he has seen rutting bucks drop their guard and make stupid mistakes more than once, but none as bizarre as this one.

“He could have ran any direction he wanted, but he chose to take off up the driveway and ran straight through the window,” he said. “It made for a Thanksgiving that none of us will ever forget. That’s for sure.”

Texas’ 2019-20 general season for white-tailed deer rolls to a close on Jan. 5 in the state’s North Zone and Jan. 19 in South Zone, but interested hunters can still take advantage of special “late” deer seasons that allow for muzzleloader-only, youth-only or antlerless/unbranched antler buck harvest in designated counties.

The late deer seasons in the North Zone run Jan. 6-19; Jan. 20-Feb. 2 the South Zone. Refer to the 2019-20 Texas Outdoor Annual or to tpwd.texas.gov/regulations/outdoor-annual/hunting/seasons/county-listing/ to learn more about late seasons and bag limits specific to your county.

The special Youth-Only season runs Jan. 6-19 statewide. There is an age restriction on the Youth Only season. Licensed hunters older than 16 are not allowed participate.

The deadline is 5 p.m. on Jan. 22 for online public comment related to proposed hunting and fishing regulation changes currently under consideration by the Texas Parks and Wildlife Department.

The hot topic in hunting pertains to proposed changes to the Managed Lands Deer Program, which includes new fee requirements for participation.

The MLDP is a TPWD deer management program that allows qualifying landowners greater flexibility in managing their deer herds through liberalized harvest opportunities and longer season lengths. The program, historically free, has seen exponential growth since its inception in 1996.

Currently, there are more than 12,000 management units totaling nearly 29 million acres enrolled in the program. The program is overseen by about 80 wildlife biologists.

TPWD ways the proposed fees would generate about $1.8 million annually.

The  revenue would allow the department to hire additional staff to help oversee the MLDP program.

The last time TPWD hired any new wildlife biologists was 2000, when a group of 10 was hired, according to Alan Cain, TPWD white-tailed deer program leader.