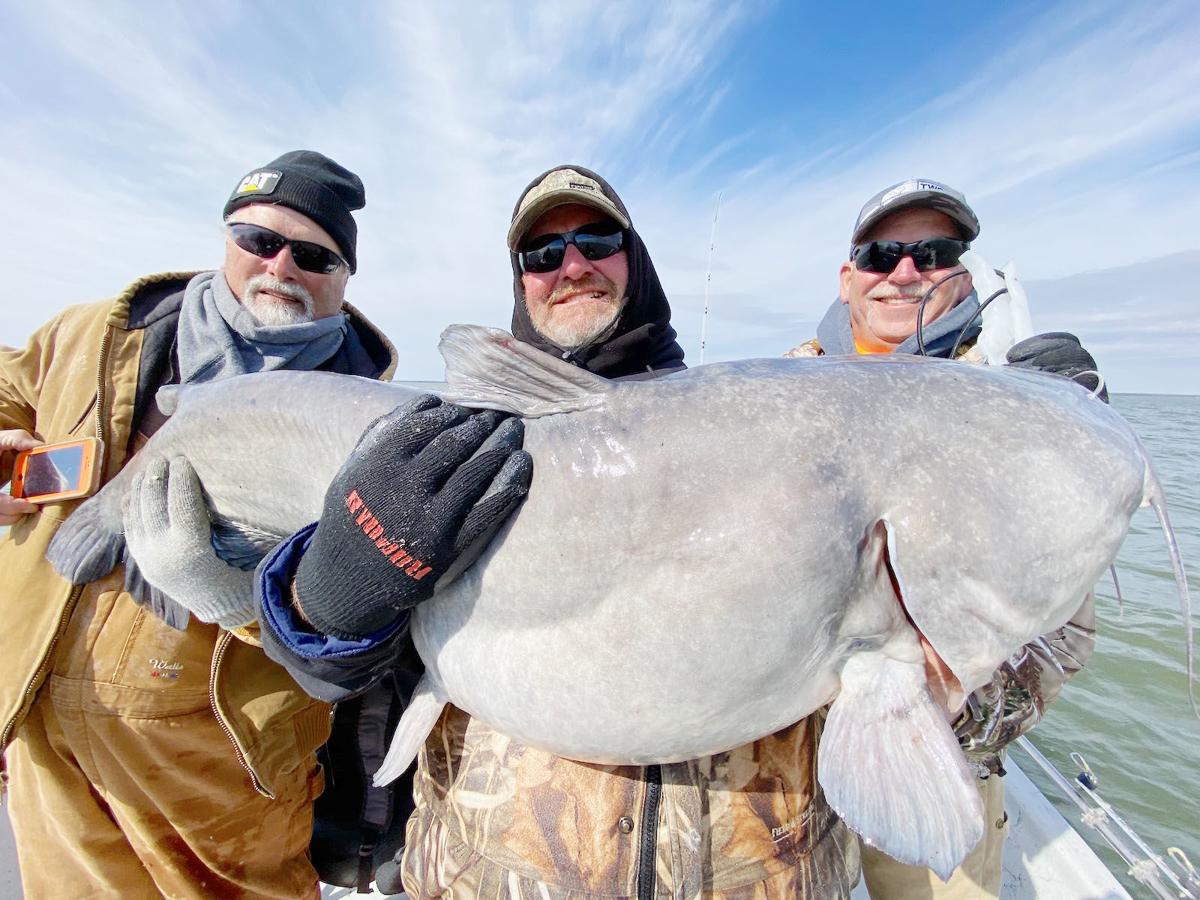 Kenny Quiett of Delia, Kan. (center) with the 80-pound blue catfish he landed on Feb. 15 at Lake Tawakoni. Veteran fishing guide Noel Ibarra put the angler on the fish while drifting in about 34 feet water. The fat cat ate a six-inch piece of gizzard shad rigged on a 8/0 circle hook. Ibarra rigs with a 30-pound test monofilament main line and 100-pound test mono leader. 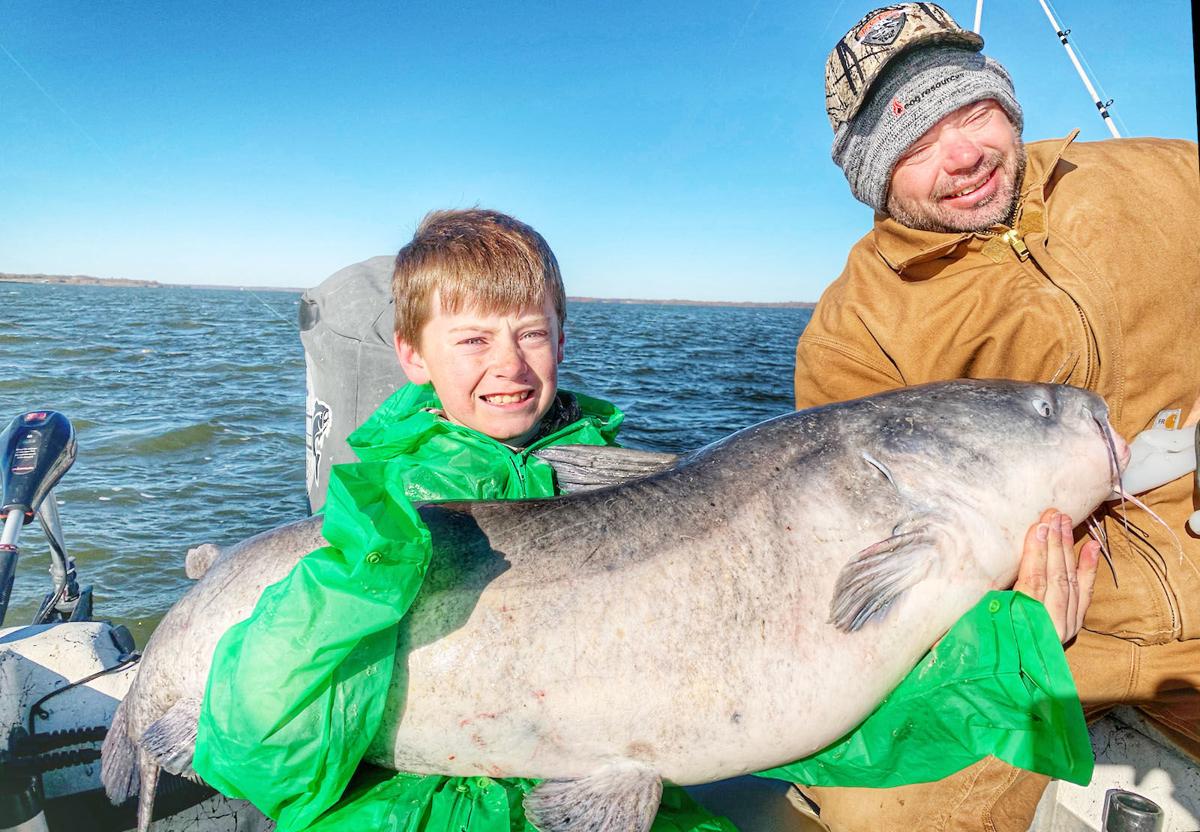 Scout Schiffbauer, 12, caught this 64 pounder while fishing with Ibarra (right) on Dec. 30. The fish was three pounds shy of the 67 pound youth state record caught last March at Tawakoni by Brayden Rogers of Cisco, also from Ibarra’s boat.

Kenny Quiett of Delia, Kan. (center) with the 80-pound blue catfish he landed on Feb. 15 at Lake Tawakoni. Veteran fishing guide Noel Ibarra put the angler on the fish while drifting in about 34 feet water. The fat cat ate a six-inch piece of gizzard shad rigged on a 8/0 circle hook. Ibarra rigs with a 30-pound test monofilament main line and 100-pound test mono leader.

Scout Schiffbauer, 12, caught this 64 pounder while fishing with Ibarra (right) on Dec. 30. The fish was three pounds shy of the 67 pound youth state record caught last March at Tawakoni by Brayden Rogers of Cisco, also from Ibarra’s boat.

This hasn’t been the best of winters for reeling in tall numbers of kingsize blue catfish at Lake Tawakoni, but Noel Ibarra has still had a pretty hot hand.

Ibarra is a veteran fishing guide who hangs his hat at Michael and Teri Littlejohn’s new Open Water Lodge near Wills Point, home base for the couple’s Lake Tawakoni Guide Service. Like other guides on the team, Ibarra is a multi-species expert who specializes in going after whatever happens to be biting best at the time.

The 38,000-acre reservoir ranks among the best on the planet for catching multiple species, often in large numbers. Abundant channel cat and temperate bass like hybrid stripers, white bass and striped bass are huge draws for fun-fishing crowds, but Tawakoni’s trophy blue cat fishery is quickly gaining popularity with those looking for quality over quantity. It’s among the state’s top lakes for fish upwards of 30 pounds, most of which are released after they are caught.

Ibarra, 41, grew up guiding on Lake Lewisville before relocating to Tawakoni in 2000 and eventually hooking up with the Littlejohn’s outfit three years ago. The Carrollton native has always had a knack catching whiskered fish, but he seems to have found the groove for putting clients on the real whoppers.

“Tawakoni is a special lake, no doubt,” Ibarra said. “There are some giants out there. I’ve been fortunate to have a good run on big fish the last couple of years.”

Ibarra says the best time for a big bite is whenever you happen to get one, but winter is usually when the largest fish are most active and easiest to catch. Odds are most favorable during extended periods of cold weather that chill water temperatures and cause the fish to concentrate in deep water, often around pods of shad.

Ibarra says fishing conditions have been less than ideal this winter due to unseasonably warm temperatures.

“It never has gotten cold and stayed cold,” he said. “The fishing has been on and off. The big ones are still biting, but we haven’t been catching 7-9 big fish per trip like we have in the past. We’re catching 2-3 a day. They have been bigger overall than last year.”

Several of the whoppers have been hauled aboard Ibarra’s 24-foot center console rig in recent times, a few that would outweigh the average third grader. The biggest cat, an 80 pounder, came calling on the afternoon of Feb. 15. The fish capped off what had otherwise been a pretty slow day for the guide’s group of four anglers headed up by Dean Heibert of Delia, Kan.

“It had been a pretty tough morning,” Ibarra recalled. “I had already fished a couple of my best areas and didn’t pick up much other than a few eating-size fish. It was one of those days.”

Around noon, the guide made a move to different area that changed their luck. He described it as a place where two points collide with a main lake flat at the lower portion of the lake. The water is about 34-feet deep.

Ibarra liked what he found when he got there. A howling south wind had whipped the big water into a maze of tall rollers.

“It was white-capping big time — perfect for drifting,” Ibarra said. “That’s what these fish like. The nastier the weather the better.”

Ibarra tossed a pair of drift socks overboard to slow the speed of the boat, then rigged several rods with fresh gizzard shad diced into 6-inch chunks. It wasn’t long before one of the rods bent double.

Kenny Quiett, also of Delia, was the first to see the strike. The angler initially thought the hook had snagged on bottom.

“There was no question it was a big fish,” he said.

Quiett grabbed the rod and eventually won a battle that produced what is sure to be one of the heaviest blue cats reported statewide this year on rod and reel. The 80-pounder was well off the 87.50 pound Tawakoni lake record caught from Michael Littlejohn’s boat in Feb. 2014 by Jody Jenkins, but it is the biggest fish reported by the outfit this season.

Jenkins’ benchmark is not the only record Ibarra’s clients have flirted with this season. On December 30, 12-year-old Scout Schiffbauer of Bryson reeled in a 64 pounder that fell just shy of the youth state record set at Tawakoni last March by 13-year-old Brayden Rogers of Cisco.

Rogers’ blue cat, also caught from Ibarra’s boat, weighed 67 pounds. It dethroned Lane Ferguson's 66.20-pounder as the heaviest blue cat ever caught in Texas on a rod and reel by a youth angler. Ferguson, of Fort Worth, caught his record blue cat in December 2011 at Lake Worth, a 3,500-acre lake in Fort Worth. He was 12 at the time.

The Texas state rod and reel record blue cat is 121.50 pounds. It was caught in Jan. 2004 at Lake Texoma by Cody Mullennix of Howe.

All public comments related to proposed changes to the 2020-21 Statewide Recreational Fishing and Hunting Proclamations will be considered before the Texas Parks and Wildlife Commission votes to accept, amend or deny any regulation changes during its March 26 regulatory hearing in Austin. What follows is synopsis of the changes as proposed by TPWD staff:

*Pronghorn/Antlerless Mule Deer: TPWD is seeking to create an automated permit application process and deadlines for the applications. The proposed deadline for electronic applications for pronghorn permits is July 1; antlerless mule deer, Sept. 1.

Additionally, it is proposed to allow multiple landowners to combine multiple tracts of contiguous land to create an aggregate acreage for permit issuance and utilization. The idea is to increase hunting opportunity and encourage game management.

Landowners would be required to maintain a daily harvest log and provide the information to the department by a specified deadline. For pronghorn, the harvest report would be due Oct. 31 of the permit issuance year; antlerless mule deer, Sept. 1.

Flounder: Siting declining flounder populations and the need for additional protection for the popular sport fish, TPWD is proposing to close all recreational and commercial fishing for flounder during the fall spawning run from Nov. 1-Dec. 15, to increase the minimum length limit from 14 inches to 15 inches, and to strengthen language regarding who is required to report under a commercial finfish license.

*Paddle Craft All-Water Guide License: The proposal is to change the course requirements for licensing to include a leading course from the American Canoe Association or another TPWD approved course.

*Texas waters of the Red River below Lake Texoma to Shawnee Creek: Remove the minimum length limits for catfish and change the daily bag for blue and channel catfish from 25 to 15 fish.