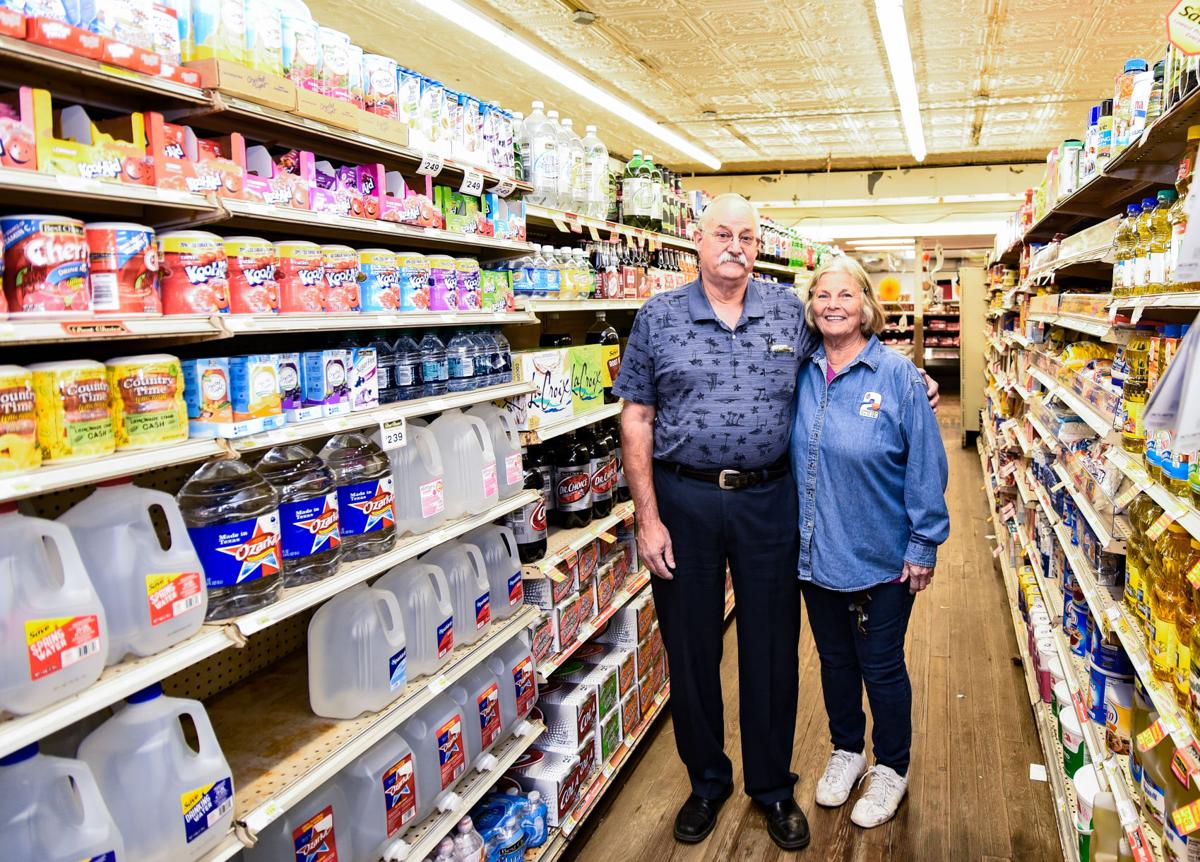 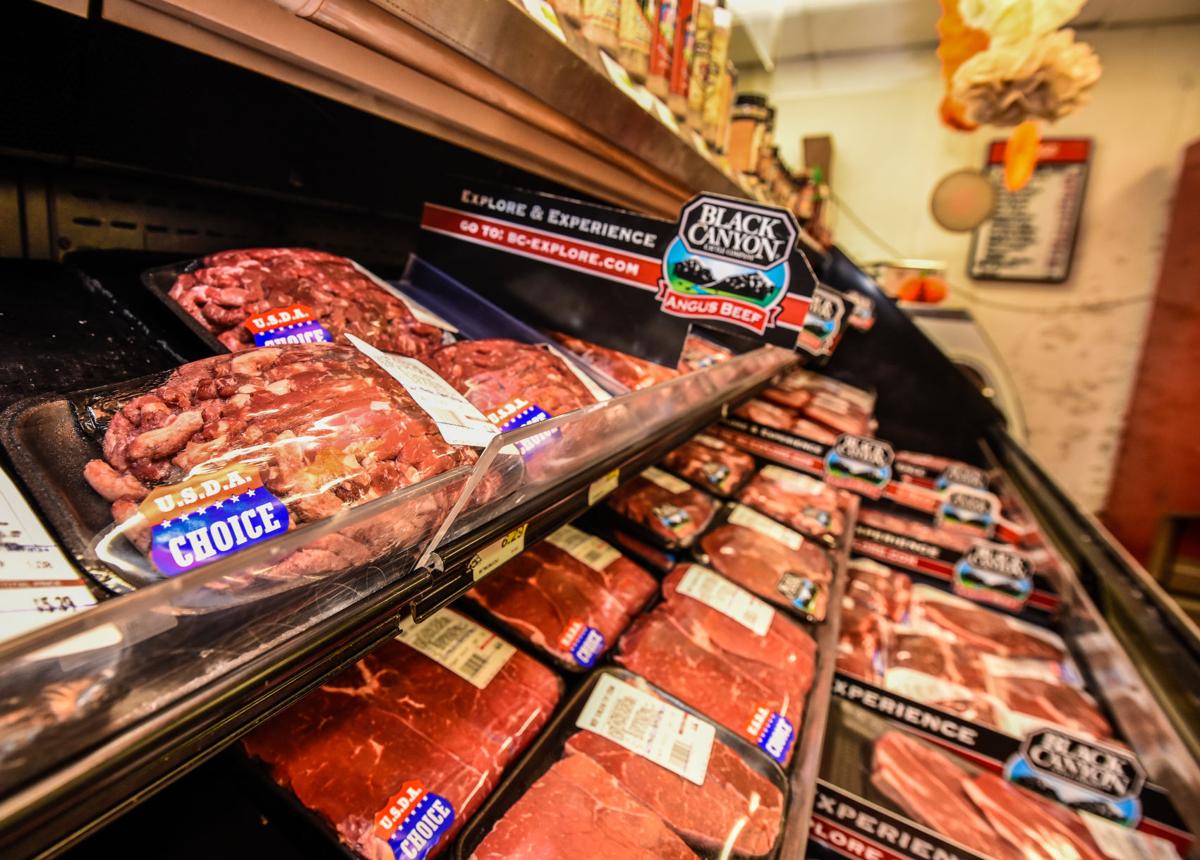 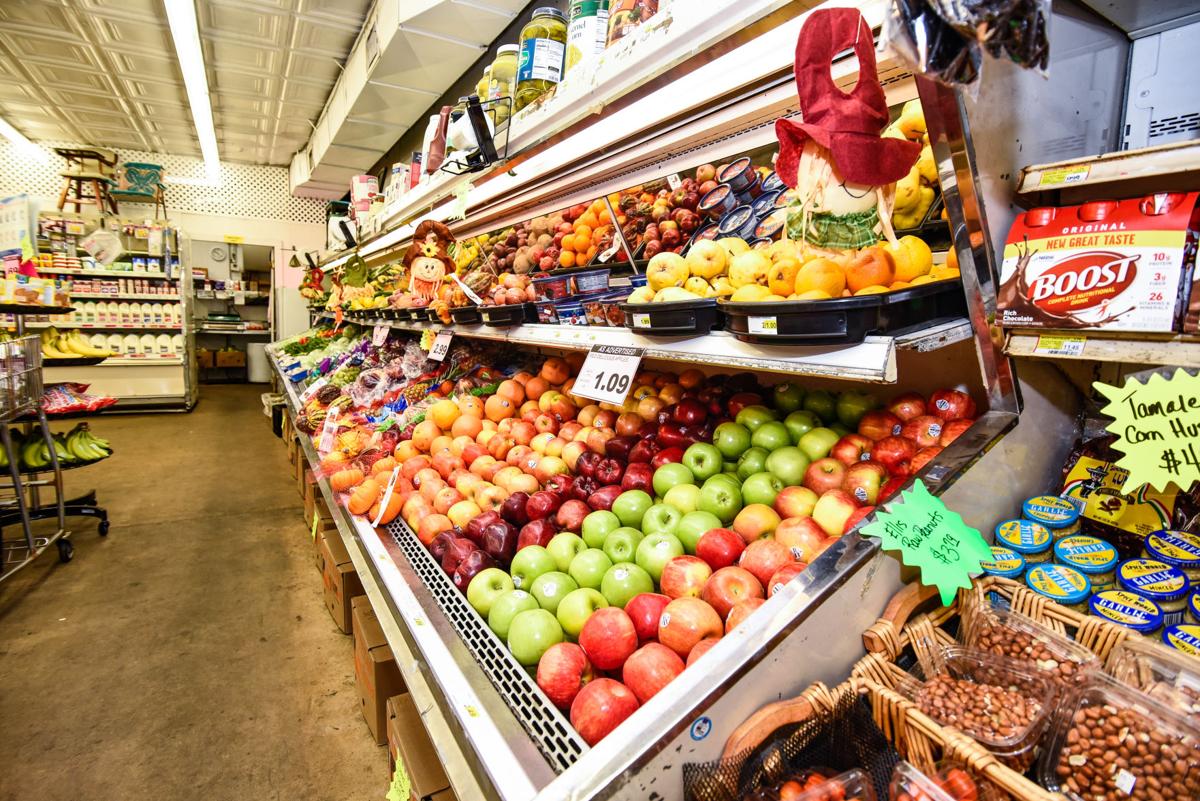 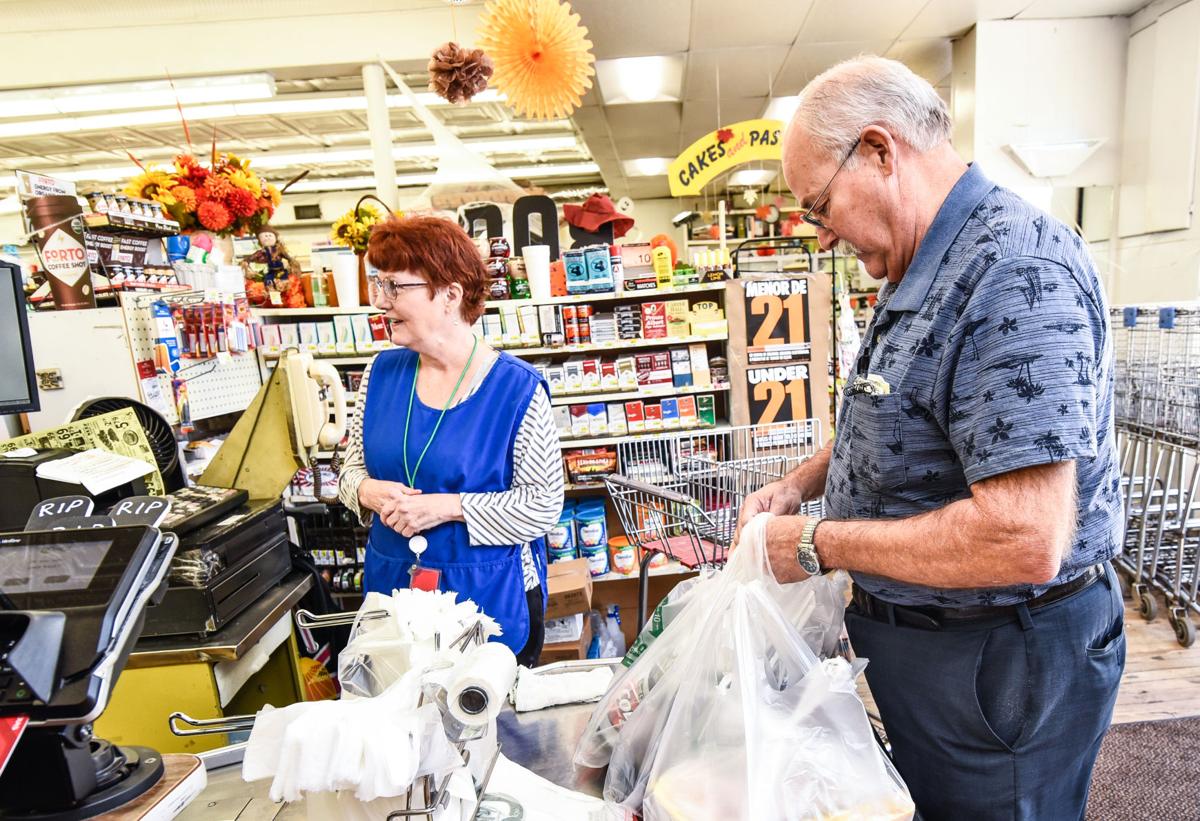 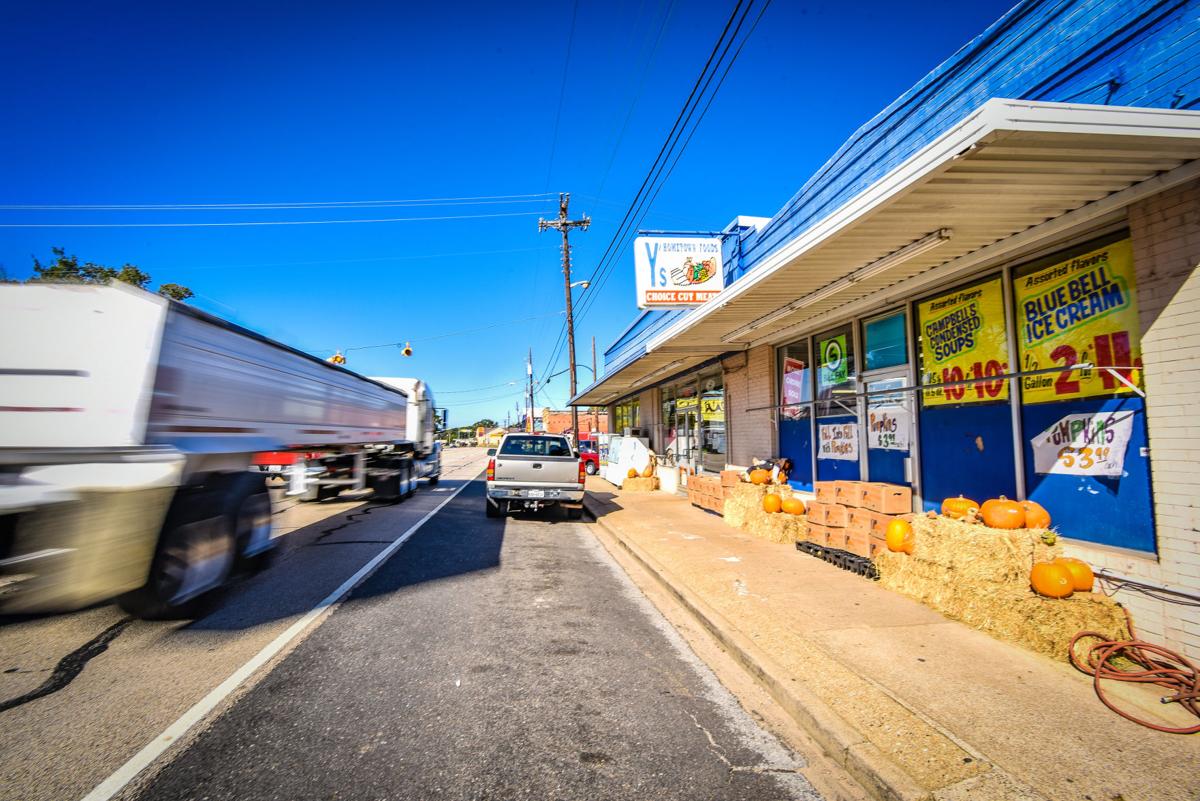 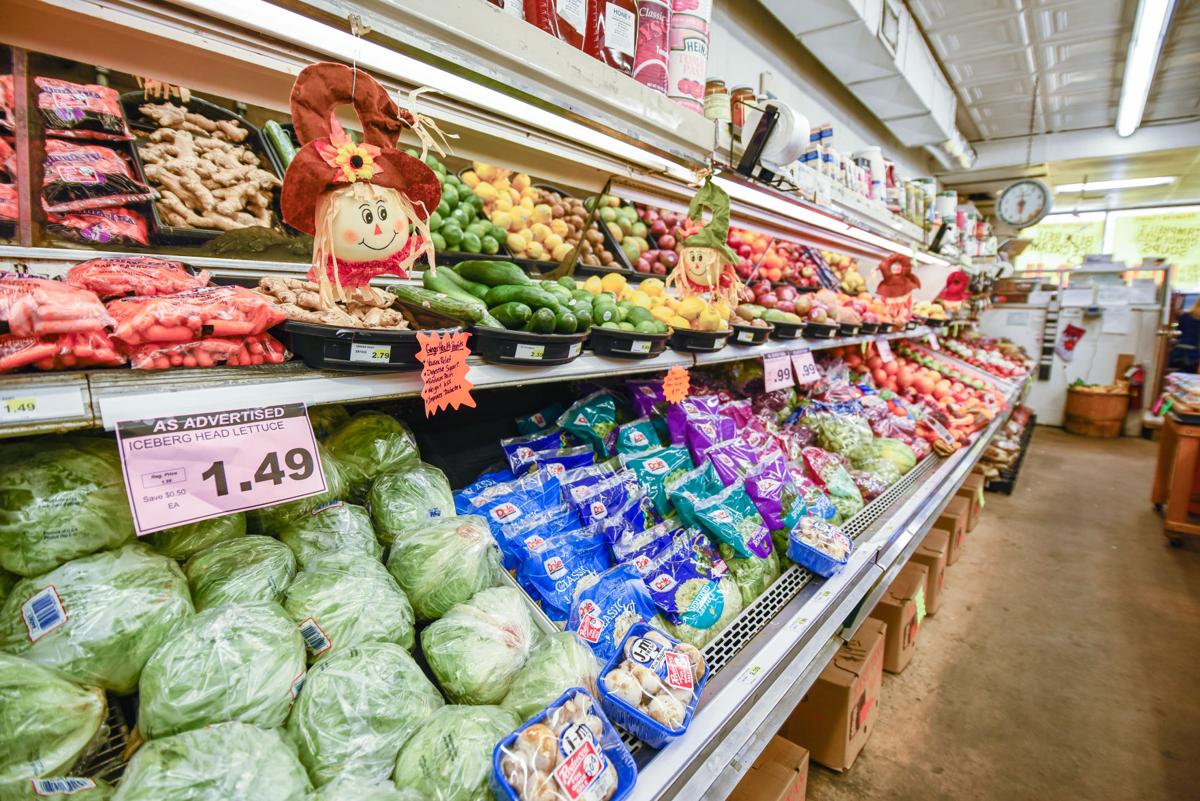 When I was a kid, there were neighborhood grocery stores. The aisles were short, and you walked to the back when you wanted fresh cut meat, which they wrapped in white paper. You could select your deli meat as well and tell them how to cut it. I remember my grandma taking her deli meat and cheese home and eating it on crackers on the davenport. For all the people under 40, that is a couch.

Driving into Brownsboro on Hwy 31, it is easy to pass through quickly on your way to Tyler or Athens and miss a 100 year old treasure. Y's Grocery store sits in the middle of town just waiting for you to step back in time.

“I started grading eggs for my dad at 5 years old,” Dusty said.

He worked all the jobs in the grocery store as the years went on and he went to work for Allied Grocery as an adult traveling around the country helping them be more successful.

When they settled in Brownsboro, Dot used to go into the local grocery store and one day Chapman, owner of Holloman's, suggested Wise come in and speak with him. He was ready to retire in his 70's and asked if the couple would like to take it over. Y's grocery was born. The name came from a cowboy brand that Wise and his father created to be his “brand.”

“The next day we were taking inventory,” he said.

Y's grocery is independently owned, and Wise is responsible for every aspect of running the store. Which is a huge responsibility.

Originally the building was a blacksmith shop, pharmacy and grocery store. Eventually it opened up to one unit, the building still has the original 100-year-old floors and tin tiled roof. Main Street used to be on the back side of the building, but when Hwy 31 came, they flipped the front door to the other side.

There are several unique features Y's has, that they are very proud of.

They only carry choice beef, and cut and grind meat fresh daily in plain view. They also provide fresh meat to their cafe, Dot's, next door, They used to sell their famous and tasty hamburgers in the store, but they quickly outgrew the space and had to expand. Chicken fried steaks are cut daily, you can't get much fresher than that.

They even offer old fashioned pressed ham, which apparently is a hot commodity. Customers come from Dallas, and one woman from Washington state comes in and buys it to take home whenever she comes to visit.

Prices are competitive and special attention is given to quality and customer service, something they are the most proud of.

One of these being, home delivery. Some of the customers are home bound and Y's delivers groceries to them. Although they are not able to do that for all of their customers, they love being able to do this for those in need.

“Grocery delivery is nothing new to us, we have been doing it since the beginning.” he said.

Delivery service is nothing new, I grew up in the grocery business with my dad and we made deliveries in the fifties, at 10 and 4 every day.”

Wise commented on what he enjoyed about his business and what lessons he learned from his father.

“The biggest blessing has been the people, not just the customers but the employees too,” he said. “We see the kids grow up, we know 99% of the people that walk through the door.”

Wise believes that what sets his store apart is the personal service. They employ about 2.5 people for every one that you see in the big stores.

“We're going to give service,” he said. “We are going to do whatever we can to get someone checked out.”

A fact that he proved as he bagged someones groceries and helped them to the car.

You won't have to worry about finding an employee to help you at Y's.

“This country was founded by small businesses,” he said. “Treat the customer right, even if it is going to cost you, and treat your employees with compassion.” he said of lessons he learned from his father.

Charlene, an employee has been with him for 33 years. As I went to photograph the charming store, I rounded the corner and saw one of the cashiers dancing to 1950s music, she said “We love to dance around here.” Surely a sign of a happy workplace, as I spoke to other employees, the theme continued.

One after the other the employees bragged on their employer.

“I love my boss, I have the greatest boss in the world. I go to church with him, I love the store, I love all my customers, I'm a real people person. This has been a whole new experience.” said Mary Dupree, employee for seven years. “I know everybody, I pray with them, I talk to them, It's like a family here.”

Wendy Smith, an employee of five years, started out as a cashier and has been trained in everything except produce, but can do that in a pinch. She is also the store manager.

“Mr. Wise, I have never had a boss as good as him,” she said. “I would bend over backwards for that man. He is family first, he is a good man.”

One young man was training as a new butcher, he has worked there off and on since high school. He is hoping to one day be the market manager.

“You get friendly people,” Smith said. “greeting you every time you come in. we will cut to order and we don't carry anything but choice beef, the quality is going to be better. We can offer a smile and friendliness.”

“Dusty has always been in the grocery business, we just love it,” Dot said. “we get to know all the people and make friends. We know everyone in town, it's like a family.”

Jeanette, the self-proclaimed 'best pie maker in Henderson County', is responsible for baking and works in produce.

“I've been in the grocery store business for a long time,” she said. “but this has been the best place to be. I got back into church because of him (Mr. Wise). People think we are expensive, but we are not. If they shop our prices we are pretty competitive, and we bake here. We exist!”

Pies, cookies, cakes and other treats are baked fresh regularly. I had a banana nut scone and mmmm. After trying Ms. Jeanette's pie some people who didn't like sweet potato pie are now fans for life.

The fact remains that the small businesses are what makes communities thrive. You can go to a chain and purchase your groceries or goods for less in some cases, some of them will even let you check yourself out robbing someone of a job and getting you to work for free!

Is it really a savings when you have to drive twice as far? A large retail chain can only employ so many people, and when it gets the monopoly often-times it can raise the prices to whatever it wants.

When you support a local business, you are supporting someone's dream while guaranteeing yourself the expertise, first rate service and quality we have let go of.

So the next time you are driving down Hwy. 31 in Brownsboro, treat yourself. Stop at Y's, go in, mention this article and see what they are all about. Have some of Jeanette's baked goods or homemade banana pudding, and have Wendy cut you a ribeye just the right thickness. After working up an appetite shopping go next door to dot's and sit down for an old-fashioned hamburger.

Make sure you enjoy everyones company while you are there.

Peggy Ruth Wathen, of Houston, passed away on May 22, 2020. She was born on October 16th, 1933 in Cross Roads to the late Reba Frances Wathen and James Richard Wathen. She is survived by her sister Joan (Wathen) Maniscalco and her husband Joseph; James R. Wathen and his wife Jeanne; nieces a…