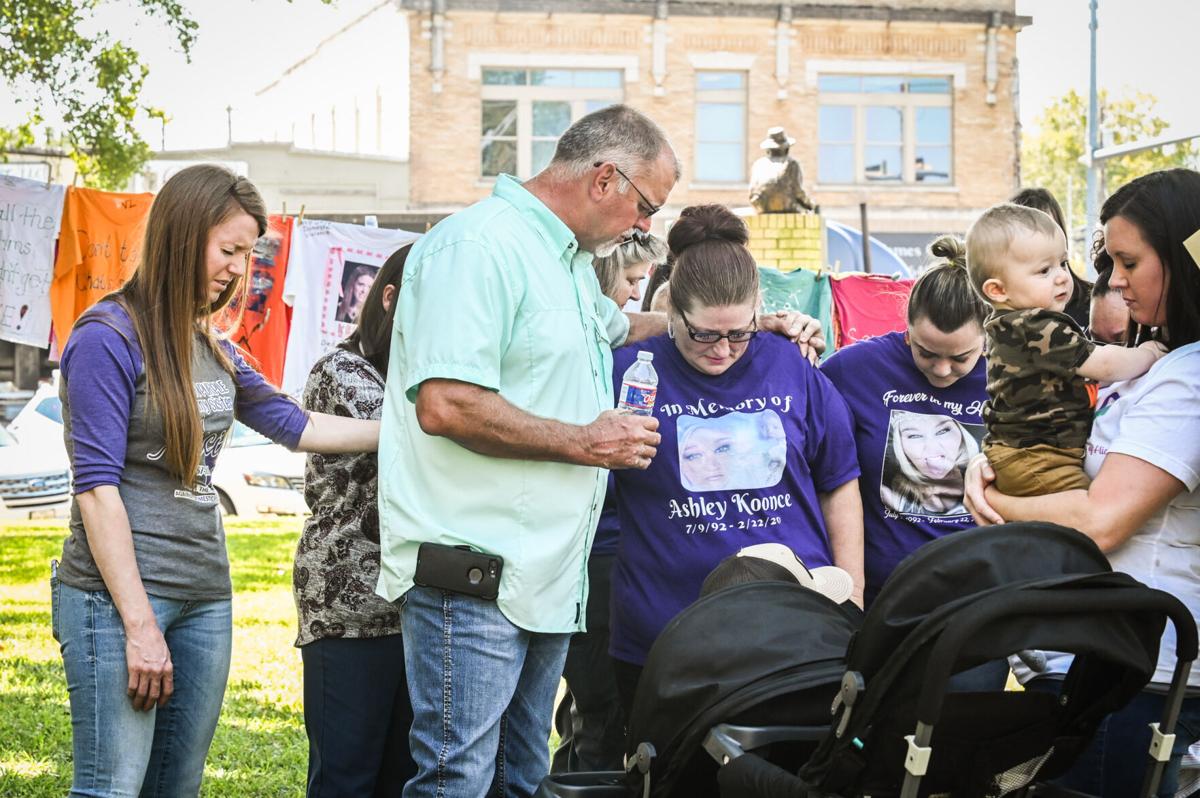 Doug Weaver, father to Alicia Weaver Scott, who was murdered by her husband, prays with Angela Koonce, whose daughter Ashley Koonce was allegedly killed by her domestic partner. 'God will get you through,' he said. 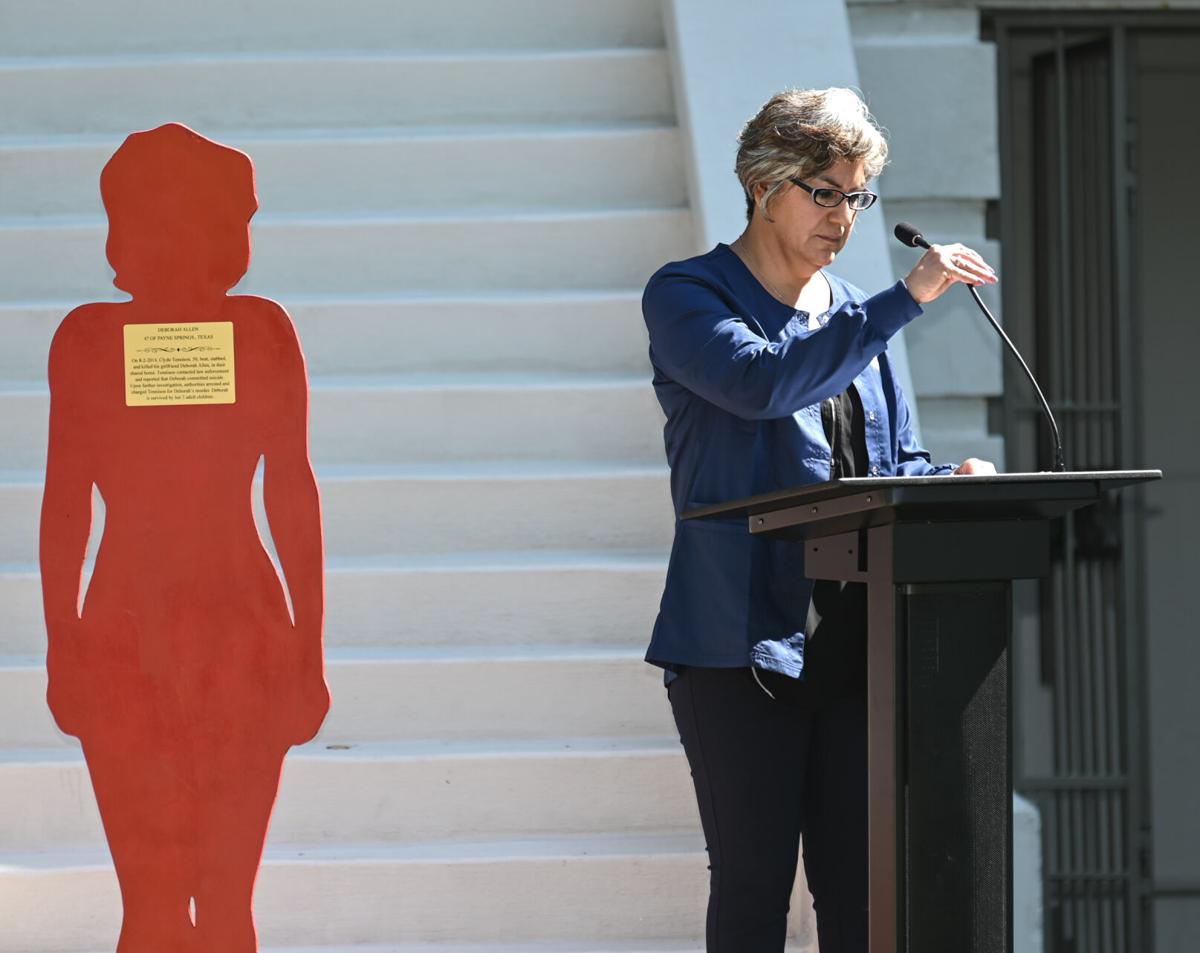 Guest speaker Maria Lourdes spoke on survival. She is a HEARTS facilitator for ETCC and a survivor herself.By Shelli Parker 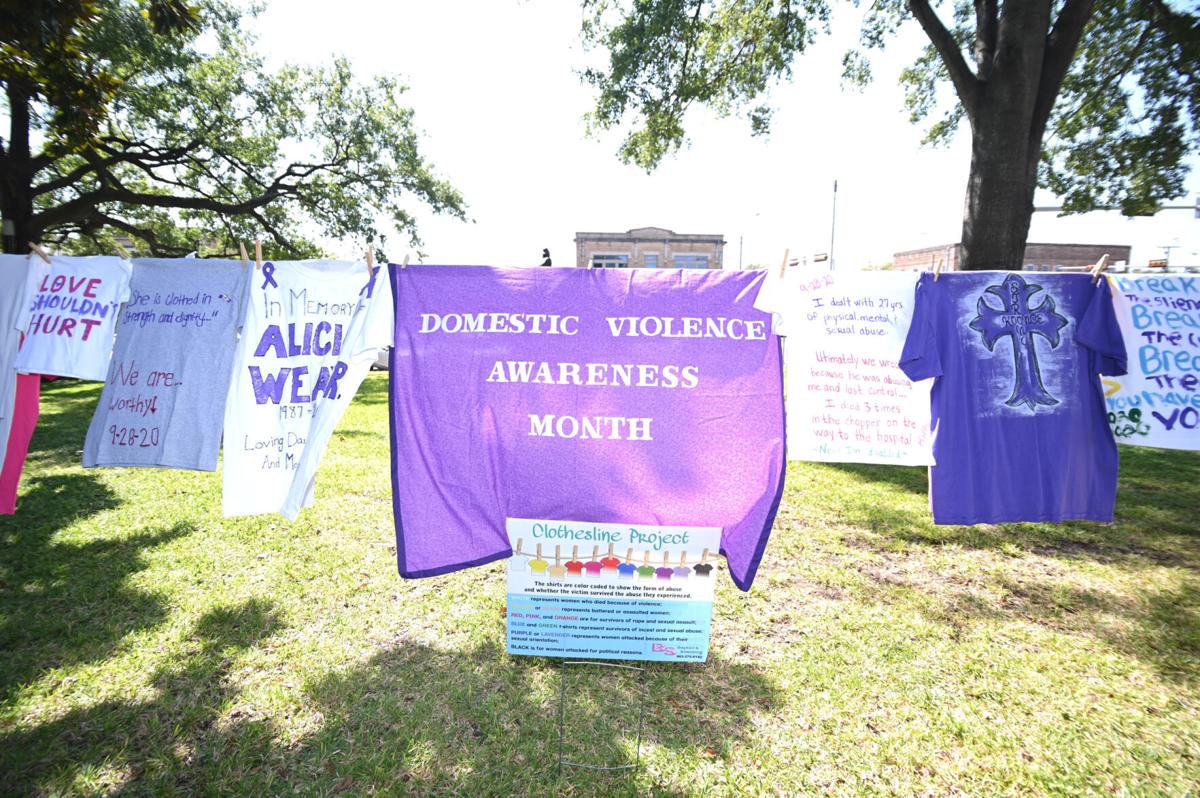 Shirts of various colors were hung around the Athens Courthouse in honor of victims. 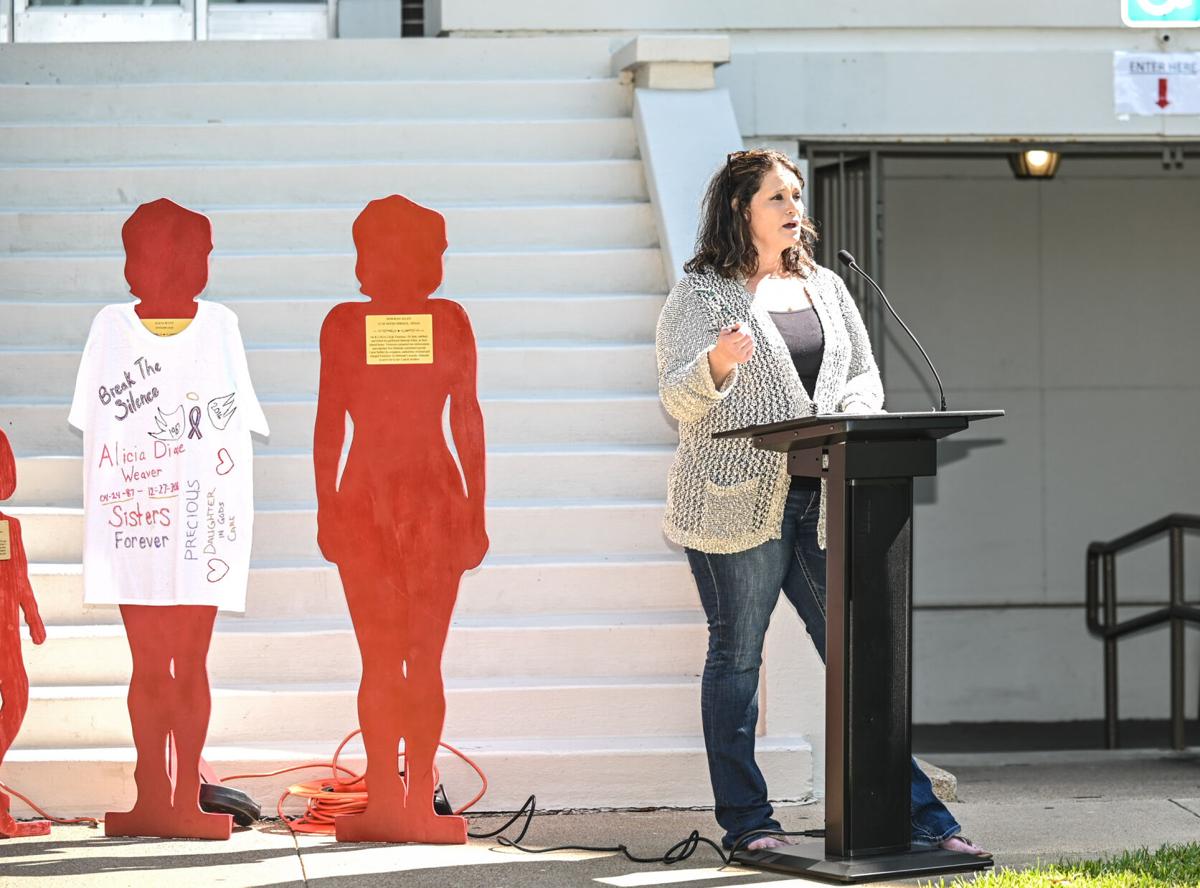 Della Cooper speaks at the proclamation. She is seen standing next to the 'silent witnesses' who represent victims who were killed by domestic violence. 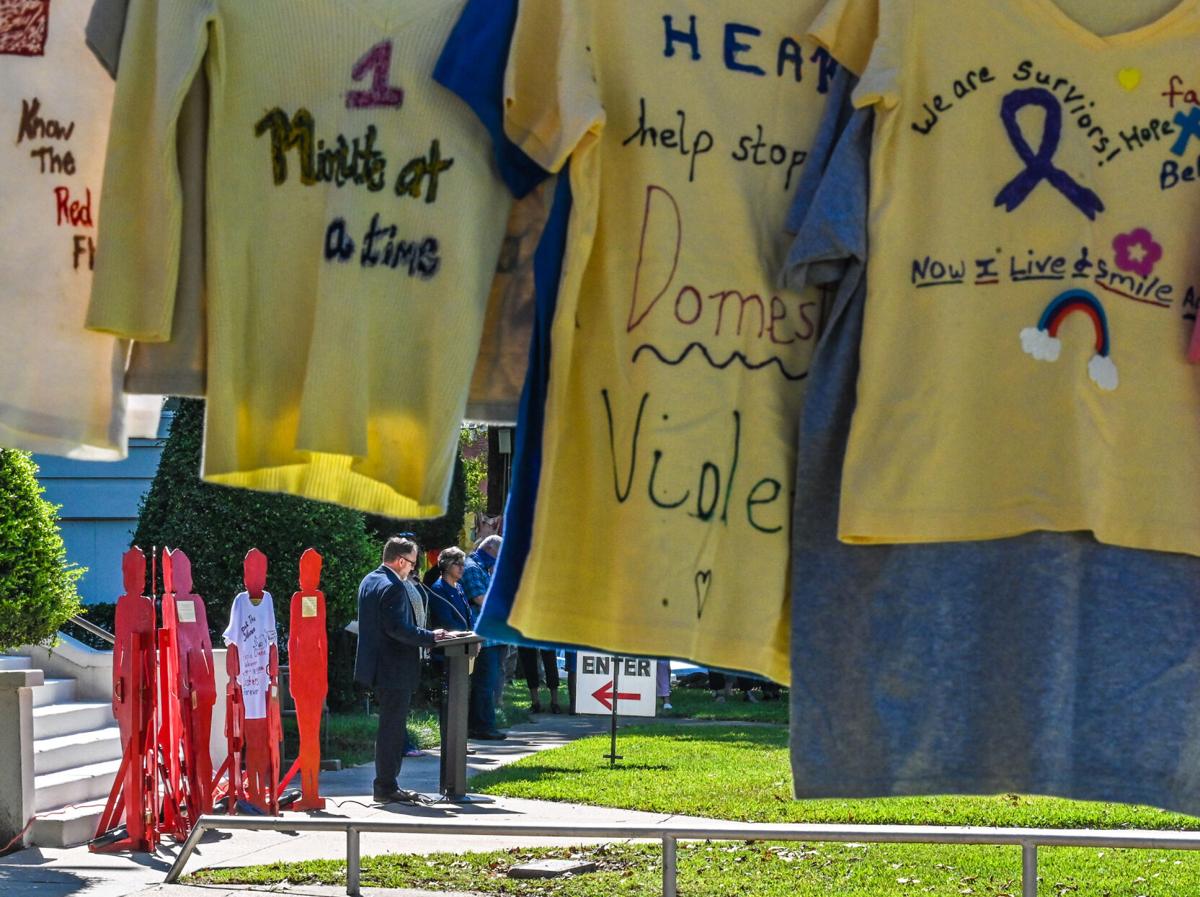 Doug Weaver, father to Alicia Weaver Scott, who was murdered by her husband, prays with Angela Koonce, whose daughter Ashley Koonce was allegedly killed by her domestic partner. 'God will get you through,' he said.

Guest speaker Maria Lourdes spoke on survival. She is a HEARTS facilitator for ETCC and a survivor herself.By Shelli Parker

Shirts of various colors were hung around the Athens Courthouse in honor of victims.

Della Cooper speaks at the proclamation. She is seen standing next to the 'silent witnesses' who represent victims who were killed by domestic violence.

Multi-colored shirts hung around the Henderson County Courthouse Tuesday as a stark reminder and a silent scream of domestic violence victims everywhere, some whose voices were permanently silenced by their abuser.

County Judge Wade McKinney presented a proclamation to the East Texas Crisis Center declaring October Domestic Violence Awareness and Prevention Month. This was the 22nd annual event that McKinney has participated in.

“My first domestic violence proclamation was in Oct. 1999,” he said.

Many came to show their support including the families of Alicia Weaver Scott and Ashley Koonce, who were both murder victims of domestic violence. The lawn was full of survivors, family members, non-profits and law enforcement. The Weaver and Koonce families prayed and offered words of encouragement to each other.

Maria Lourdes, a survivor who has since become a victim advocate for ETCC, shared her courageous story at the event.

Lourdes said she never saw herself falling victim to domestic violence, it wasn’t until her husband of 20 years nearly choked her that she left.

“I thought I knew the signs of abuse,” Lourdes said. “ I didn’t think it was abuse because he wasn’t punching me. He isolated me from my family, I lost my self. I took him back because he promised to never do it again. I thought things would change. They did, but not how I thought."

Her husband continued his abuse, one time forcing her into labor. She was forced to quit her job, and as their family grew, so did the reason to keep trying.

“He always promised it was the last time, so I would stay,” Lourdes said. "I felt stupid, worthless, and ugly. After 20 years of abuse I finally left and went to the East Texas Crisis Center. I am now helping victims of domestic violence."

The ETCC hangs the shirts and displays the “silent witnesses” annually on the square, with each color telling a victims story and having a meaning. The shirts are created by the victim or their family members.

The silent witnesses represent a person killed by domestic violence.

It is an atrocity to think that a loved and trusted companion could hurt their parter and children, but it happens every day, everywhere. It is not limited by location, race or social status.

The Athens Police Department received 136 calls in 2020 for service, with 30 incident reports being filed and eight arrests. Henderson County Sheriff’s Office made 37 arrests and received 107 calls.

The real numbers are higher.

"Domestic violence is a serious problem not only here but across our Nation," Sheriff Botie Hillhouse stated. "We are here to help any person who is involved in a domestic violence situation."

COVID-19 has had a large impact on the numbers, but in spite of it all ETCC helped 313 victims this year. This number is down from 595 helped in 2019. During the pandemic, many victims have been forced to stay silent in abusive environments. Offenders have lost jobs and transportation, and Della Cooper, ETCC Director of Outreach, said she expects the numbers to rise.

“We are continuing to see people face-to-face in the office,” Cooper said. “We are here to assist and be a voice, whether by computer, phone or in-person.”

Common misconceptions such as “It will get better,” and “I never believed it would go that far” often times keep victims trapped in their dangerous circumstances.

However, Cooper said there is a better way. The local non-profit helps hundreds annually through counseling, assistance with legal aspects of fleeing an abusive partner, child custody, shelter guidance and some financial aspects. They offer a 12-step program for abuse victims and a program for abusers.

“We want you to know that you have options and there is better!” Cooper said. “You do not have to stay in the situation you are in. Everything doesn't go back to normal immediately, but don't get discouraged. You don't graduate from school in a week, there is a process to everything in life. Take it one day at a time, follow the program and you will reach your goals.”

A hotline is available for victims of Family Violence and survivors of Sexual Assault and can be reached at 1-800-333-0358.

If you would like to assist victims of domestic violence and sexual assault, you can donate or consider sponsoring the largest fundraiser of the year. Sponsors are needed for the annual Wine & Cheese Gala. For more information, please contact 903-675-2137 or visit www.etcc.org.