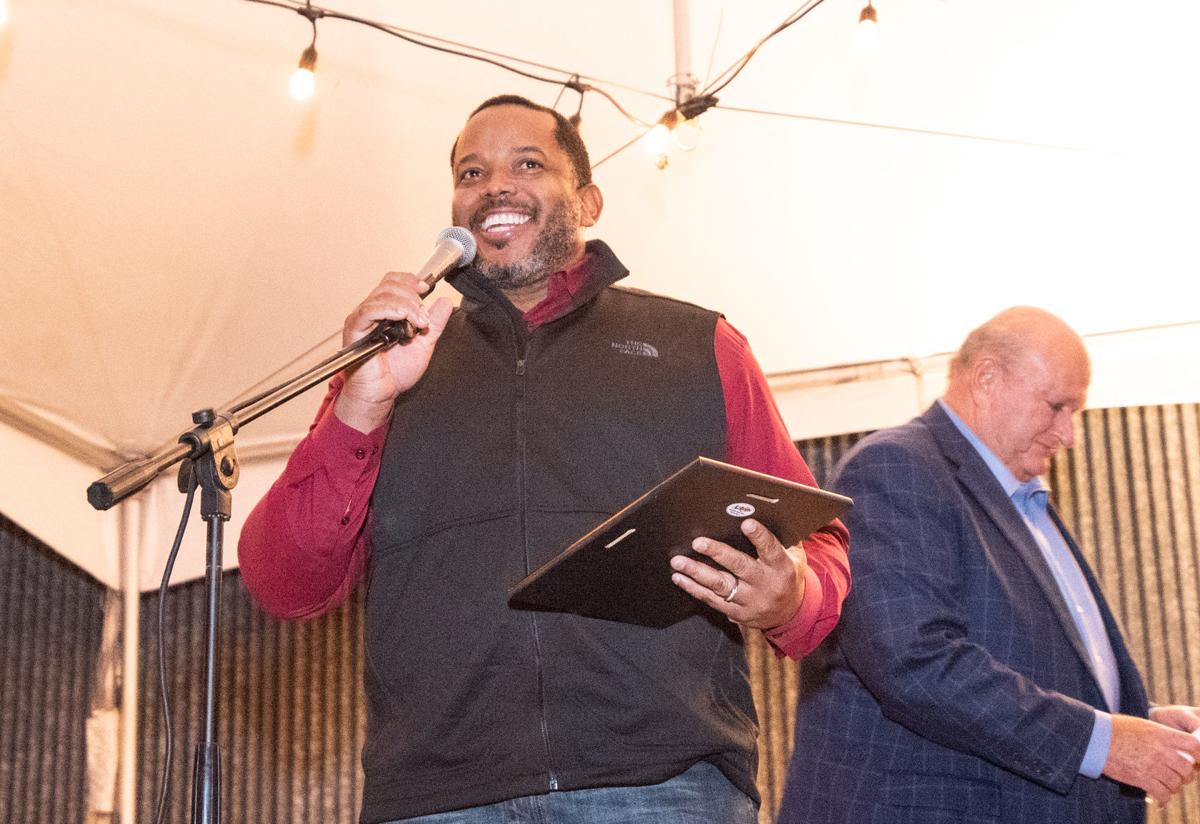 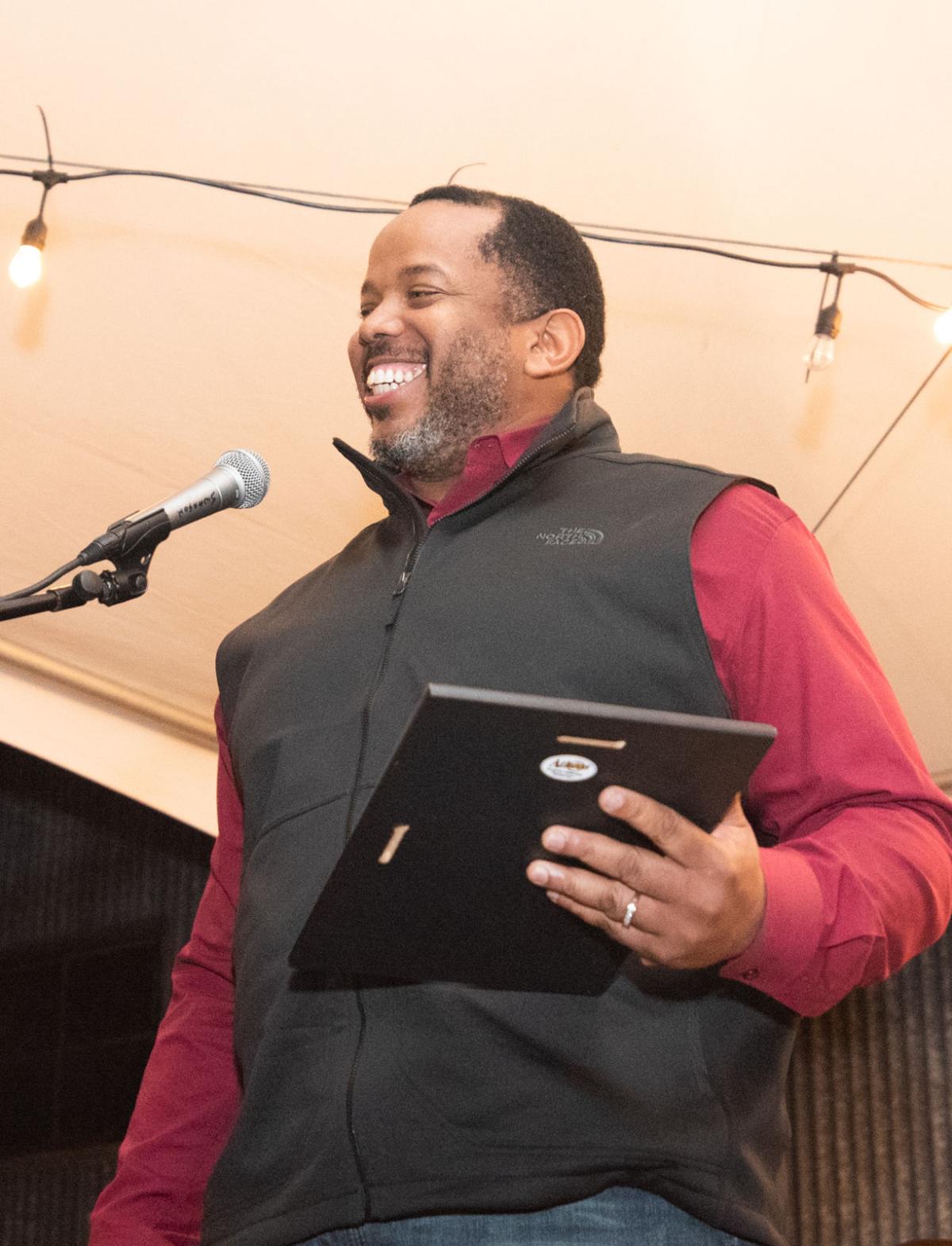 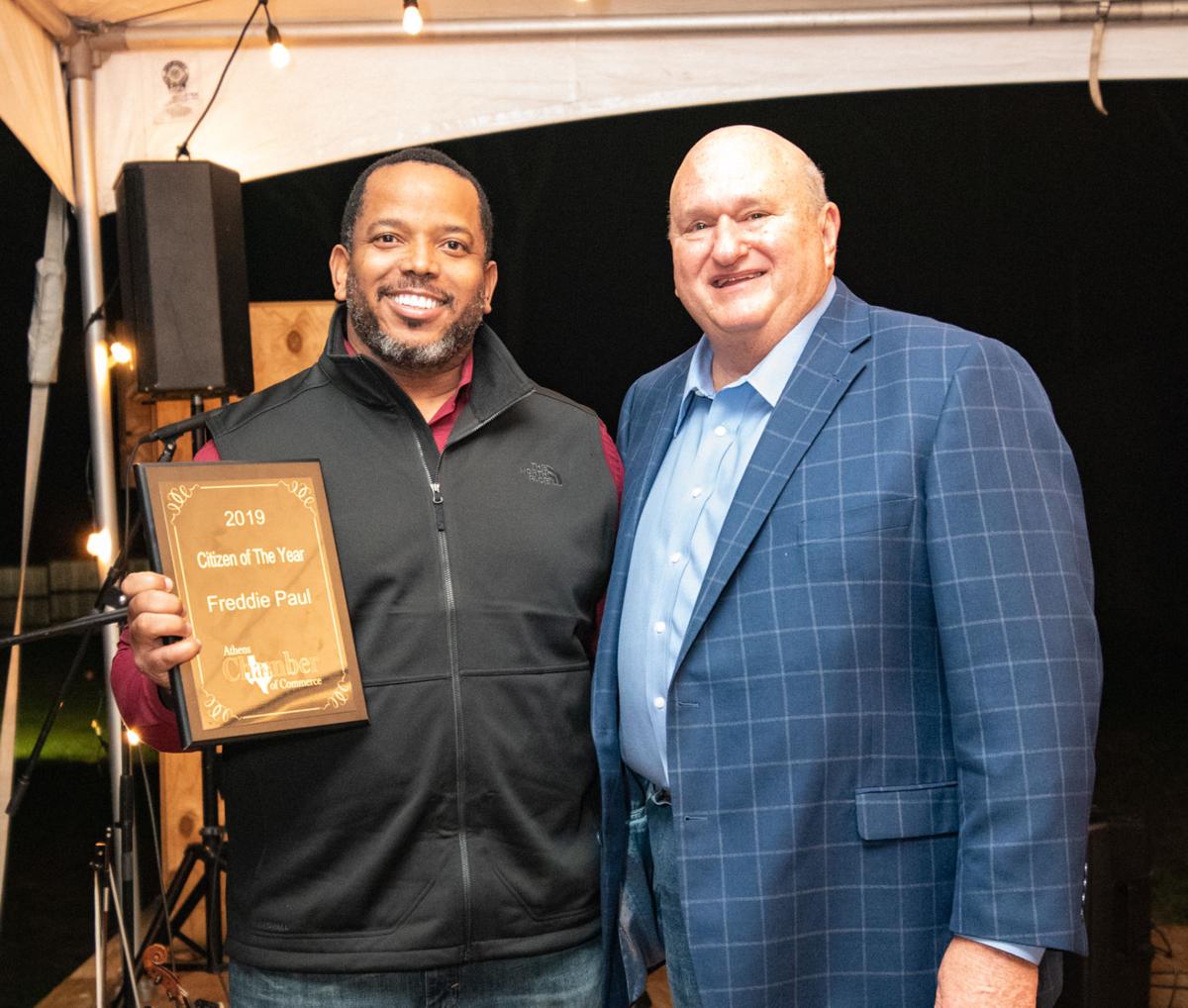 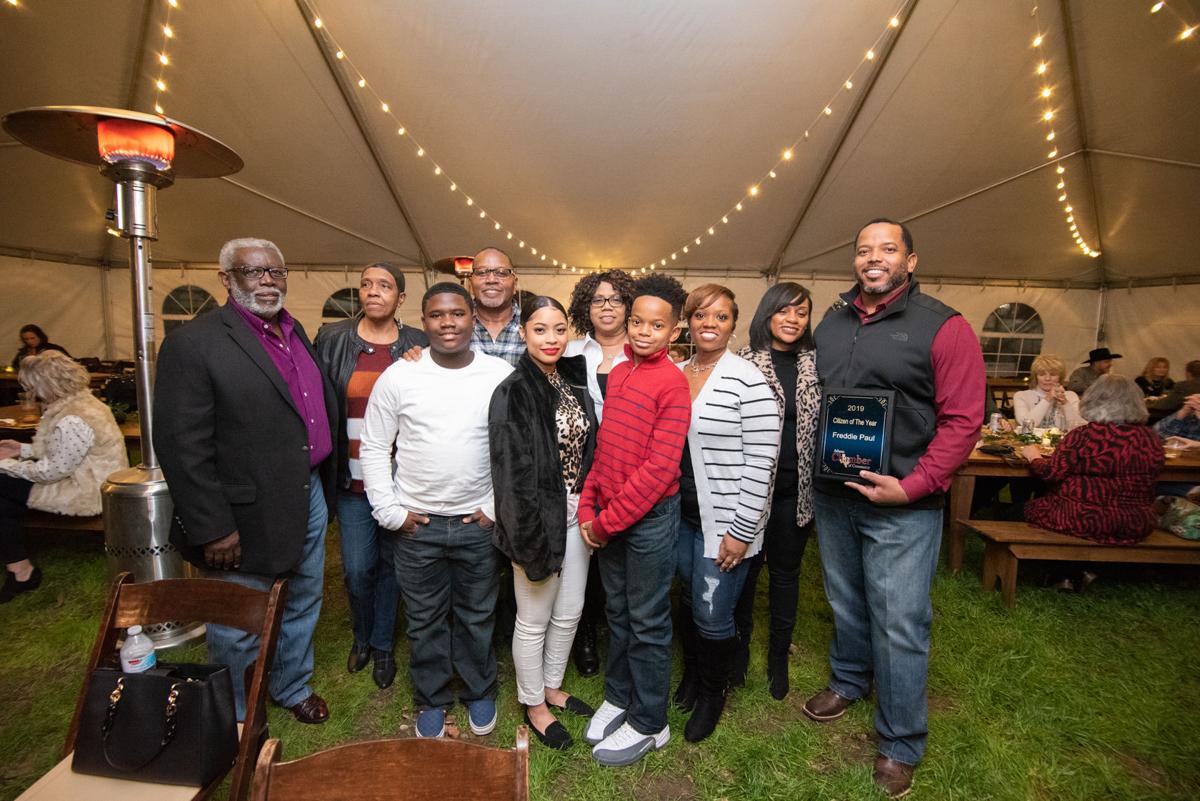 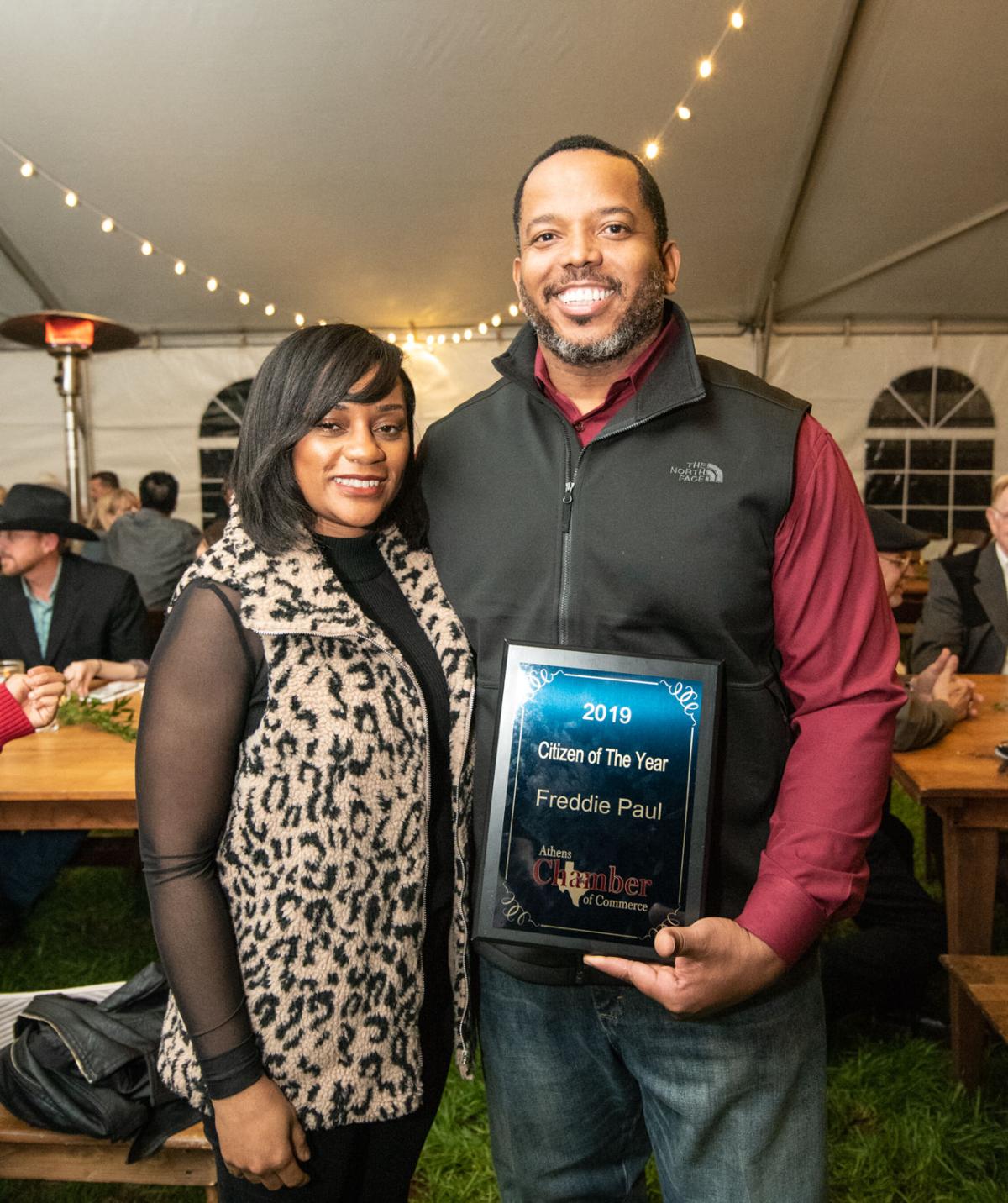 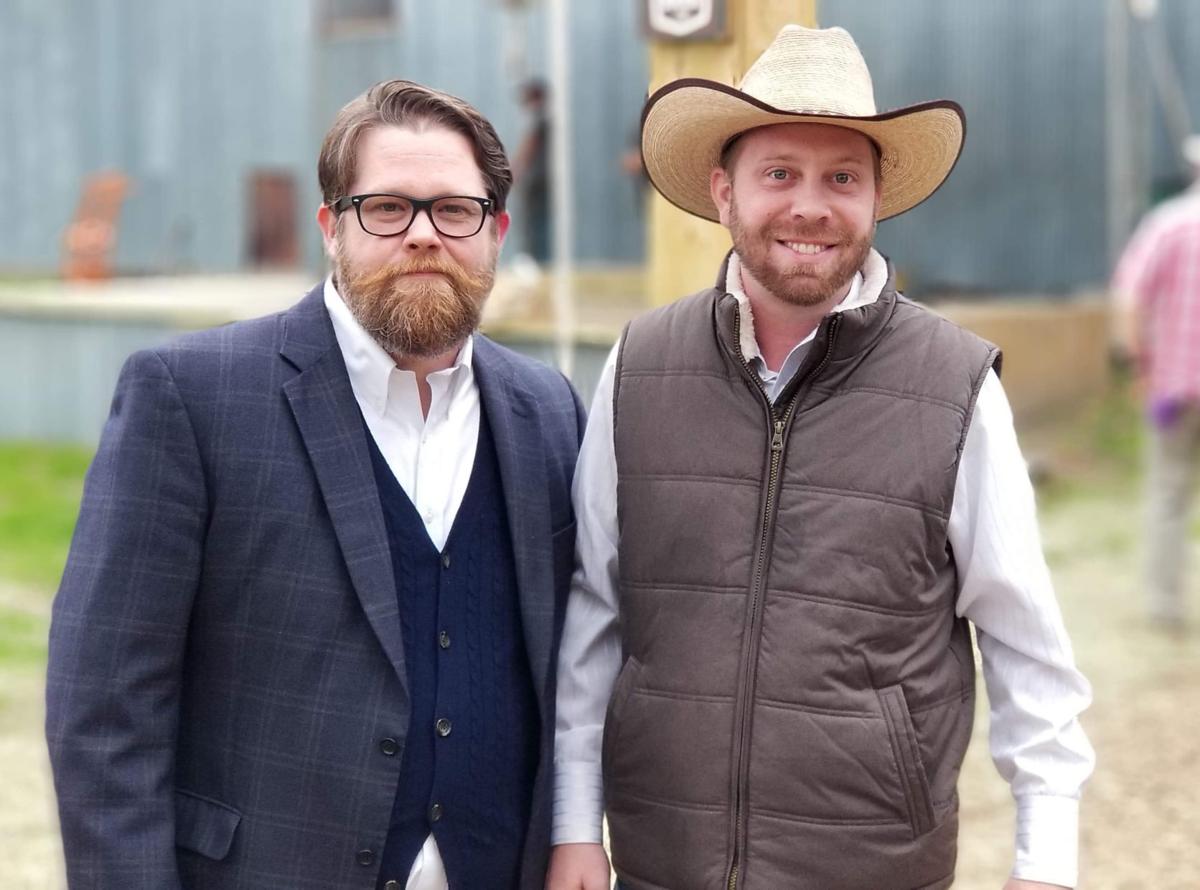 Guests at the Athens Chamber of Commerce’s annual gala were in for some boot-scootin' fun Friday evening as they danced the night away to western swing band Shoot Low Sheriff and dined on food catered by the Railway Cafe.

This year's event was hosted by Common Area Market, the old black-eyed pea processing gin, which was a fitting place to make a big announcement, the return of the Black-Eyed Pea Festival.

The Black-Eyed Pea Festival is coming back in 2020!

That was the announcement from Athens Chamber of Commerce Chairman Chris Tinsley.

Tinsley was joined on stage for the announcement by incoming Chamber Chairman Beau Humble and Athens Mayor Monte Montgomery.

"We visited with a lot of people over the past three months as we worked to reimagine the chamber and everyone we talked to wanted to bring back the Black-Eyed Pea Festival," Tinsley said. "We believe that bringing it back as a country Christmas celebration will pull the best of Athens together and create a great opportunity for our community and our local businesses."

Preliminary plans call for combining the Athens Christmas Parade, the holiday market, and the chamber gala into a week-long celebration in December.

The week would start with the Christmas parade one Saturday and end the next Saturday with a community celebration. During the week, there would be concerts, games, a holiday market and more.

And all of it with a black-eyed pea flair.

"The Black-Eyed Pea Festival was an important part of my childhood growing up in Athens," said Mayor Monte Montgomery. "I am excited to see the chamber stepping up to bring it back and I believe it will be a great benefit to our community and local businesses."

Tinsley will be the committee chairman for the first Black-Eyed Pea Country Christmas.

"As an Athens native, I know the importance of the Black-Eyed Pea Festival to the community," he said. "The chamber is excited to help bring back this iconic Athens event."

Citizen of the Year

The top honor of the evening, the Citizen of the Year award, went to Athens businessman and community leader, Freddie Paul Jr.

Steve Barksdale, 2018 Citizen of the Year took the stage and announced Paul as the 2019 recipient of the prestigious award.

The award recognizes an individual who has made a significant contribution to the betterment of Athens or the community.

An Athens High School alum, Paul has a heart for youth. He is a deacon at the Church of the Living God and shares his faith through action to many. He worked many years at Futurematrix and currently owns Biomerics, which has invested in Athens recently.

“This individual has the heart of our youth with the service performed,” Barksdale said. “Long days helping with the Youth Football league; time spent on raking the baseball infield for kids to play, hours before getting up to go to the gym — not to work out — but to sweep the floor and ready the gym for Little Dribbler teams to arrive. This man knows how to invest his time in our youth.”

He is an arborist and a family man, husband to Cylecia and father figure to Kelcee, Kaden and Jase.

Oval Pirtle, founder of Henderson County Jr. College was announced as the first award recepeint in 1966. In 1971 the COC picked up the tradition. A news release through the Athens Daily Review was issued requesting nominations. After being reviewed by the committee, the selection was made judged on their dedication and contributions of both time and talents to the Athens community.

At this time, the last five recipients of the award make up the committee.

“So each year, when you see requests for nominations please take the time to recommend your Citizen of the Year,” Barksdale requested.