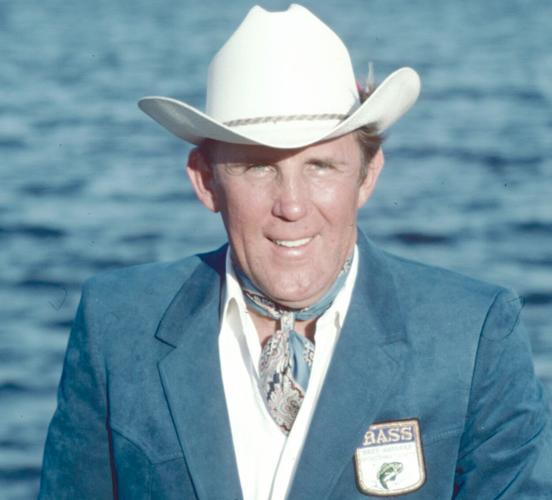 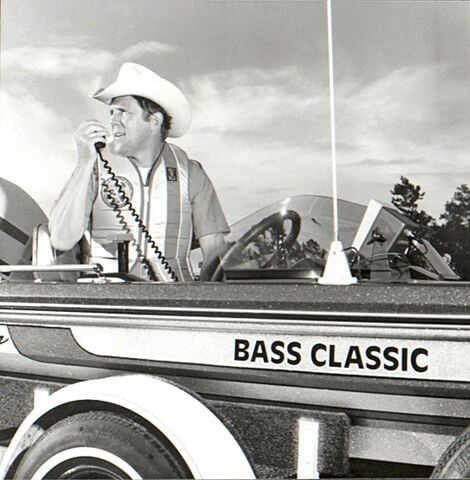 When Ray Scott founded B.A.S.S. he laid the foundation and erected the framework for solid a platform where careers have been launched, names have been made and many related businesses have thrived. (BASS Photo) 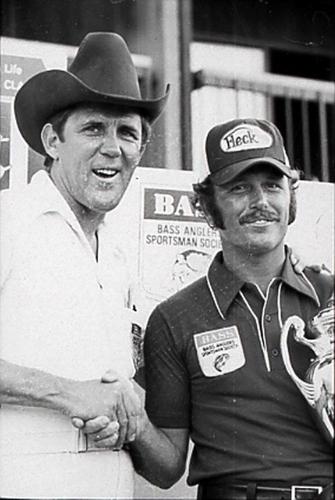 When Ray Scott founded B.A.S.S. he laid the foundation and erected the framework for solid a platform where careers have been launched, names have been made and many related businesses have thrived. (BASS Photo)

It’s been an eventful spring for bass derbies on Texas lakes. Dozens of anglers at varied competition levels have come away winners with some nice pay checks in their pockets in exchange for reeling in a few fish.

One of the more significant big league finishes of 2022 went down in late April on Lake Palestine, site of the Bass Pro Tour Heavy Hitters tournament hosted by Major League Fishing.

The six-day event was limited to 32 qualifiers based on the total weight of their five biggest bass from the 2021 BPT tournament season. The 2022 Heavy Hitters overall winner, Ott DeFoe of Blaine, Tennessee, earned $100,000.

Interestingly, Waco angler Alton Jones, Jr., finished fifth in the same event but took home a bigger chunk of change, including $150,000 in big bass bonus money. Jones won an extra $50,000 for catching the biggest bass in the tournament’s Knockout Round, then racked up $100,000 more for reeling in the heaviest single bass of the Championship Round — not bad wages for two fish and a few hours labor.

Jones’ 2022 accolades don’t stop there. The young pro also grabbed the championship trophy and the $100,000 top prize at the BPT Toro Stage Two event in February at Lake Fork. It was the first major win of Jones’ pro career dating back to 2017, when he joined the Bassmaster Elite Series.

Speaking of the Elites, Bassmaster’s top tier pros will be at Lake Fork on May 19-22 for the fifth qualifier of the 2022 tournament season. At 5 1/2 feet below full pool, Fork is set up entirely different than the last time the Elites came to town.

Lee Livesay of Longview won the April 2021 event and $100,000 with a four-day total of 112-5. Livesay is a heavy favorite to repeat in 2022. He fresh off fresh off a Bassmaster Cental Open win on Mississippi’s Ross Barnett Reservoir, so momentum is in his corner. Livesay’s third career victory qualified him for the 2023 Bassmaster Classic and the chance to fish for a top prize of $300,000.

Then there is the inspiring story of Hayden Heck.

Heck is a 22-year old California transplant who moved to Lufkin two years ago with aspirations of becoming a professional bass fisherman. The young angler took a big step in the right direction earlier this month when he whipped a contingent of local hammers in the MLF Toyota Series Southwestern Division event on Sam Rayburn. Heck’s first career win earned him $75,300.

Bass fishing success stories like those unfold on lakes across America just about every weekend this time of year. And most anglers close to the sport will agree that none of it would be possible had Ray Scott not paved the way.

For those who may have not yet heard, Scott, recognized as the father of modern bass fishing, passed away peacefully in his sleep on natural causes on the night of May 8. He was 88.

A former insurance salesman who liked to bass fish, Scott was a visionary and magnificent story teller who had big aspirations of elevating the sport bass fishing to tall heights when he invited 106 of the nation’s best-known anglers to ante up $100 each to compete in the first All-American bass tournament on Beaver Lake in Arkansas in 1967. He made it known to several anglers that he got the idea from the late Earl Golding of Waco, who held the first Texas State Bass Tournament on Lake Whitney in the mid-1950s.

One thing lead to another, including the launch of Bassmaster Magazine and the formation of the Bass Anglers Sportsman Society, both in 1968.

B.A.S.S. lives on today with the support of hundreds of thousands of faithful followers around the globe, a popular television show and one of the most nation’s most powerful voices on conservation and environmental issues. Scott’s brainchild, the Bassmaster Classic, has been held annually for 52 years and is widely known as the bass fishing’s Super Bowl.

At the root of it all is the sprightly black bass, a tenacious sport fish that eventually hatched an industry worth billions annually thanks to the millions of anglers who like to chase them for fun and at varied levels of competition from low level club settings to top tier leagues like the Elites and Bass Pro Tour.

Scott didn’t single-handedly build the sport of bass tournament fishing as we know it today, but he laid the the foundation and erected the framework for a solid platform where careers have been launched, names have been made and many related businesses have thrived. He also helped popularize catch and release at a time when most bass were destined for the skillet.

Veteran Texas bass pro Tommy Martin of Milam wrote a fitting tribute about Scott on his Facebook page. Martin, 81, still guides fishing trips and competes in pro level tournaments. He won the 1974 Bassmaster Classic three years after Scott launched the year-end B.A.S.S. championship on Lake Mead in 1971. He earned $15,400 for the win on Wheeler Lake in Alabama that helped make his career.

Martin recalled the early years of pro bassin’ as an era where the leaderboard was scratched in chalk and the charismatic emcee barked weights and entertaining wise cracks over a megaphone as competitors crossed the stage. Well known for his theatrics and innate ability to cast electricity on a ‘Classic party, Scott once rode an elephant into the weigh-in arena.

“All of us that love bass tournaments and eat, sleep, and breath fishing have this man to thank,” Martin wrote. “His vision and hard work made B.A.S.S. the great organization it is. Ray was tough but fair. He didn’t give anybody special treatment; he probably picked on Bill Dance more than anybody. He was definitely a leader. There are few men that come along like Ray Scott and he will be missed by the fishing industry.”

Like many anglers who launched their careers during the infancy years of the sport, Martin has many fond memories of Scott. One that sticks in his mind is how good he was at guessing the weight of a bass.

“He loved to bet,” Martin chuckled. “Just about every time I brought a big bass to weigh-in he always wanted to bet me a dollar to see who could get the closest to the weight of the fish before he put it on the scales. I only beat him once and I’ve got that dollar bill framed on my wall. He took a bunch of dollar bills from me over the years.”

No surprise, there. The Bass Boss saw lots of bass.

Recovering America’s Wildlife Act Would Save Fish and Wildlife, Add Jobs and Grow Businesses in Texas

The Recovering America’s Wildlife Act (RAWA) is currently racing through Congress with unprecedented bipartisan support. RAWA could bring $50 million to the state to help protect wildlife, restore land and give Texans more ways to enjoy the outdoors. Help is needed to get RAWA to the finish line. The public is encouraged to contact their U.S. senators and representatives to vote “yes” for this important legislation.

On a national level, RAWA would provide $1.4 billion in dedicated annual funding for proactive collaborative efforts by state and tribal wildlife conservation initiatives to support at-risk wildlife populations and their habitats. The funding would come from existing revenues without new taxes or government programs.

State agencies throughout the country have identified 12,000 species in need of conservation assistance in federally approved State Wildlife Action Plans. These plans would help guide spending from RAWA. Additionally, tribal nations would receive $97.5 million annually to fund proactive wildlife conservation efforts on tens of millions of acres of land. At least 15 percent of the resources would be used to recover species listed as threatened or endangered.

“The litany of ways natural resources bolster the Texas economy and improve our quality of life is seemingly endless,” said Carter Smith, Executive Director of the Texas Parks and Wildlife Department. “Studies show property values can increase up to 20 percent when adjacent to natural areas. Natural buffers make coasts and communities more resilient to intense storms and flood events, thereby protecting our citizens and saving billions of dollars in recovery costs. While it would do much to protect fish and wildlife that need it most, the Recovering America’s Wildlife Act would also mean a long-term investment in the public health and well-being of all Texans, as well as stewardship of our home ground.”

According to the Outdoor Industry Association, the Texas outdoor recreation economy annually generates 327,000 jobs, $14.4 billion in wages and $3.5 billion in state and local tax revenue. People travel from all over the world to see Texas’ iconic landscapes and unique wildlife, generating nature tourism revenue. Additionally, RAWA would send $50 million in grant funds flowing across Texas to nonprofit organizations, nature centers, universities, landowners, fish and wildlife management agencies and many others for projects to conserve vulnerable wildlife before they become endangered.

Unfortunately, the outdoor recreation industry depends on many fish and wildlife species that are declining including birds, mammals, reptiles, amphibians, invertebrates, plants and more. If RAWA passed, it could bring additional resources toward projects involving much loved animals like the monarch butterfly, brown pelican, and the ocelot. It would also allow for additional research projects including but not limited to horned lizard reintroductions, bracted twistflower conservation and surveys for new bee species.

Passage of RAWA would provide the funding needed to greatly expand habitat restoration on public and private lands, which in turn will support wildlife and critical habitat animals use to feed, nest, and live and help reverse course for declining wildlife species.

The Recovering America’s Wildlife Act is strongly supported by the Texas Alliance for America’s Fish and Wildlife, a statewide coalition of more than 165 diverse organizations and businesses, the National Wildlife Federation, The Wildlife Society, and the American Fisheries Society.