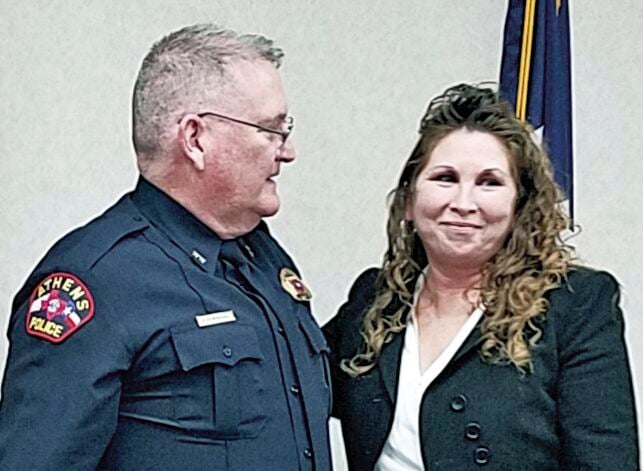 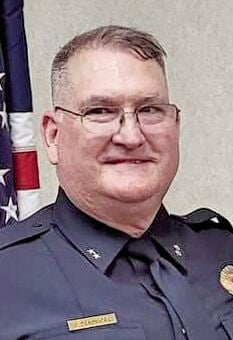 The Athens City Council added Police Chief John Densmore to the roll on Monday, with a swearing-in ceremony at the Partnership Center.

“This is a very important time for our city,” Mayor Monte Montgomery said. “We entrust the safety of out citizens to our Fire Chief Russell Marshall and our police chief, being sworn in today, John Densmore.”

Densmore said he was anxious to get to work.

Members of APD and the Athens Fire Department and Henderson County Sheriff’s Office were present along with officials from Densmore’s former department, Cedar Hill.

City Manager Elizabeth Borstad commended Assistant Chief Rodney Williams for the job he did as interim chief from September until Densmore came aboard on Monday.

“Chief Williams has stepped into the role for six months and has steered the ship for us,” Borstad said. “The council really appreciates you. You did an excellent job.”

In other activity, the council officially called an election for May 1 to elect a mayor and council member from Place 1. Mayor Monte Montgomery and Councilwoman Toni Clay have enlisted for re-election. The final day to file is Friday. If no opponents for the incumbents emerge the election can be canceled.

The council also had a first reading on moving the Zoning Ordinance into the city’s Code of Ordinances. Nothing has changed in the rules and regulations regarding zoning, but now they will be located in Chapter 22 of the ordinance book.

“It makes it a lot easier,” Borstad said. “A lot of people don’t know that there’s a separate ordinance for zoning.”

The council will vote on the change after the second reading at a future council meeting.